A pair of concerns from last year’s Main Street closure were addressed by Canmore council to help potential issues for this year.
May 15, 2021 9:00 AM By: Greg Colgan 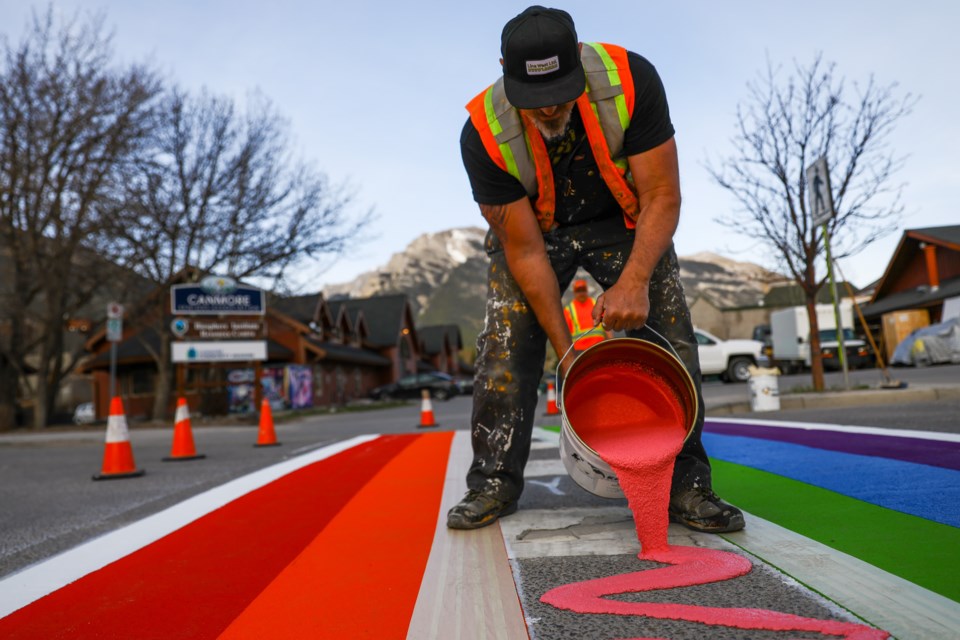 Line West Ltd. worker Mike Gallant pours the final colour of the Pride crosswalk on 6 Avenue in Canmore on Wednesday (May 5). Due to an error in mixing the yellow paint, the final colour in the crosswalk was substituted for a bubblegum pink. EVAN BUHLER RMO PHOTO

A pair of concerns from last year’s Main Street closure was addressed by Canmore council to help potential issues for this year.

The traffic and road use bylaw was amended to help manage cycling behaviour with pedestrians and ensure a three-metre width access zone.

Cyclists are already required to give the right-of-way to pedestrians on the sidewalk and multi-use trails, while the amendment added a special event area to the list.

The three-metre width emergency zone access was added to help address public health restrictions due to the COVID-19 pandemic.

Though relatively minor tweaks, the changes came after the Town received feedback from the debrief from the 2020 Main Street closure, according to the report.

Council approved an update to the Town’s Respectful Workplace Policy to include anti-racism principles and also expanded it to include anti-discrimination in governance systems.

The discussion began last summer when the Black Lives Matter movement were taking place across the world to address racial injustice against Black and Indigenous people, and people of colour.

Town staff began to look at the municipal policy and established an equity, diversity and inclusion committee with 12 staff from six different departments, according to the report.

Lisa de Soto, the town’s chief administrative officer, said they’ve met four times and helped establish a vision, priorities and recommendations that led to the Respectful Workplace Policy being updated. There would also be education and training for all Town staff.

She noted they’re also aiming to complete a survey among staff to find potential gaps they should focus on to provide additional training and education to employees.

A new contract was approved between the Town and CUPE Local 37.

According to the staff report, the contract with Local 37 expired at the end of 2020 and a series of meetings led to a memorandum of settlement being reached in March.

The contract covers seven full-time and two seasonal employees in the streets and roads department. The union voted in favour of the contract March 22.

The contract also does not include cost of living adjustments and fits within the 2021 budget as well as long-term projected financial implications.

Mayor John Borrowman thanked the human resources department and the unions for developing  positive relationship, leading to negotiations being quick and fair for both sides.

The role was temporarily held by Coun. Joanna McCallum while Comfort was on leave for medical reasons.

“It’s a great group of people, incredibly hands on, incredibly passionate about what they do, they put a lot of work, time and energy into their monthly meetings. Even though it was six or seven months, I really enjoyed my time,” McCallum said.

Comfort will hold the role for the remainder of the council term this year.