"The program is such a big part of the community and a part of the fabric of Canadian culture, so really nice to seem them try to help."
0
Dec 27, 2019 3:00 PM By: Alana MacLeod 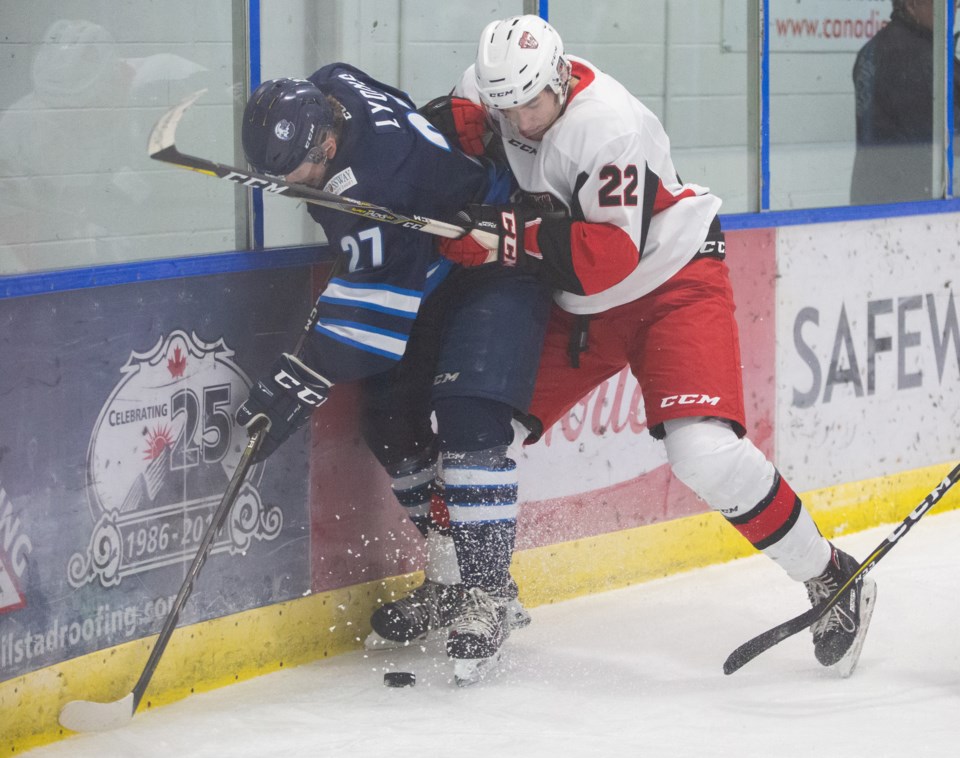 The Canmore Eagles Connor Lyons protects the puck from the Camrose Kodiaks Erik Boers during a game at the Canmore Recreation Centre on Friday (Nov. 1). Evan Buhler RMO PHOTO

CANMORE – The Canmore Eagles will soon see increased financial supports from the Town of Canmore in the form of lower ice rental fees for games.

During its regular meeting on Dec. 3, council approved a reduction in ice rental fees for games after research indicated fees are roughly 17-22 per cent higher in Canmore than the rest of the AJHL league.

In addition to this, the Town's elected officials also approved the addition of a renovated bar at the Canmore Recreation Centre, which would serve a benefit to a larger audience than just the Canmore Eagles, to be funded by both the Town and the local sports team.

“We had a look at Canmore’s ice rental fees, facility use fees compared to those in various other municipalities with AJHL teams and we found that many of our fees were in line, or comparable, within the league but one important fee, namely the hourly ice rental fee for games, is noticeably higher than it is in the rest of the league – 17 to 22 per cent higher,” said Scott McKay, the Town’s climbing and facility booking supervisor.

“Also the Town has made some infrastructure investments, some large ones within the Canmore Recreation Centre ... the Eagles have gone out and secured some in-kind donations to assist with the construction of a bar in that space and if that’s something that is chosen to go ahead with. Construction of such a bar would benefit not only the Eagles, but other user groups within that facility for various events.”

The reduction in ice rental fees for games would save the sports team $8,500 annually. Meanwhile, McKay said a bar was initially included in the Canmore Recreation Centre Lifestyle Maintenance Project, which would have been in room 230 at roughly a cost of $20,000.

“During value engineering that occurred through the budgeting process for that project, it was removed to manage costs and subsequently the Canmore Eagles indicated they’re concerned that beverage revenue generated from games and beverage sales will suffer without a functional more permanent bar amenity,” he said.

The new approved bar would be funded through sponsorship agreements as well as signed contracts that have generated a revenue of $20,000 for the Town of Canmore, $12,000 of which has already been received. The Town would use $10,000 to construct a bar in the previously identified room 230, according to McKay.

Canmore Eagles coach and general manager Andrew Milne said the changes are positive ones not only for the Eagles, but for the community.

"The Town stepped up to get behind us and make sure we're a viable program here for years to come, not just on a short-term basis. I think they want to see the program survive here over a long period of time, and this is a step to make sure that happens," he said.

"The program is such a big part of the community and a part of the fabric of Canadian culture, so really nice to seem them try to help."

Mayor John Borrowman said he supports the addition of a fully functioning bar in room 230 at the Canmore Recreation Centre.

“It seems clear to me that a permanent bar in that facility would be in essence an improvement to the Rec Centre and would benefit not on the Eagles, but other community groups and earn rent well into the future, so I’m quite supportive with moving forward with that construction,” said Borrowman.

Alongside the bar and reduced game rental fees, McKay also recommended that council approve an administrative change to the 2018 Accounts Payable Repayment Agreement, which would provide the club with 90 days as opposed to 30 to provide audited financial statements. McKay also recommended there be a clear requirement for the Eagles to pay all fees associated with the past hockey season before the start of the next hockey season.

“I think everything we can do to support our local community groups, we need to try, and I appreciate the fact, knowing both administration and the Canmore Eagles are working hard to put a successful product out there that is independent of finances from the Town, I know personally that the Eagles board has tried many options and many ways of trying to raise funds… I feel that we can help them over this hump.”