Canmore Fire-Rescue has busiest month on record in August

From March until the end of June, the number of 911 calls that Canmore Fire-Rescue responded to were below last year's numbers, but since July, there has been a significant increase with the month of August seeing the most calls for a one-month period in the department's 94-year history
Nov 20, 2020 2:00 PM By: Tanya Foubert 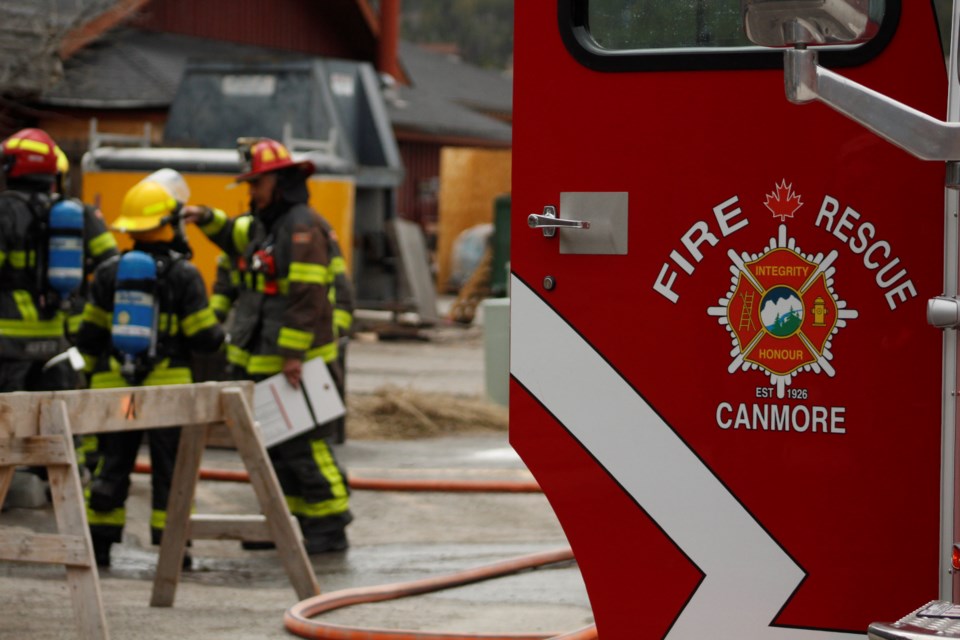 Canmore Fire-Rescue responds to a fire in May in the downtown core. Due to a peak staffing pilot project, the department was able to reduce its response time to calls from April to September. TANYA FOUBERT FILE PHOTO

CANMORE – Canmore's firefighters were kept busy this past summer responding to a variety of calls for help, with recently presented statistics showing the department had its busiest month on record this past August.

Canmore Fire-Rescue Chief Walter Gahler was in front of council in October to present results from the second year of a peak staffing pilot project and the effects the COVID-19 pandemic has had on the department.

Gahler noted that other fire departments in the region did not see increased call volumes over the summer and into the fall as a result of the pandemic, but Canmore certainly did.

"Canmore, I would suggest, definitely is a bit of an anomaly, but in a good way," he said. "We saw the increase in calls and that is not across the board [for other jurisdictions]. Most municipalities are holding at roughly the same, or they saw a reduction due to COVID.

"I think honestly that is because all the folks that live there, came to see us, frankly."

According to statistics presented to council, there was an increase of 48 per cent in call volumes this August compared to the same month in 2019. Last August, the department responded to 64 calls, whereas this year it was 95.

From February until July, during the first part of the pandemic, the call volumes for Canmore Fire-Rescue were lower than in 2019. September and October, on the other hand, have shown increased call volumes compared to the year before of 36 per cent and 68 per cent respectively.

The peak staffing pilot was approved by council in 2018 for the summer months of 2019-20. It added $80,000 to the budget each year for the department to increase the number of full-time response firefighters available to respond from the hall to four from two.

In 2019, the peak staffing was targeted during the times of day that see the highest call volumes. But in 2020, it was adjusted to provide one additional firefighter available 24/7 throughout an extended period of time – April 10 to Sept. 7.

"That is slightly less than the recommended four, but given our response footprint and how we were responding, we felt it was a safe risk to take and I am happy to report it was quite successful," Gahler said. "My expectation is that truck is rolling within 90 to 100 seconds of receipt of the call, or 911 notification, and that was by and large adhered to."

The fire chief added that several fires were caught early and put out as a result of the quick response with the enhanced staffing.

There was also a benefit during COVID of reducing the number of firefighters coming in and out of the fire hall on a regular basis, thus reducing vectors for the coronavirus.

"By reducing the amount of ins and outs at the hall, particularly through the first wave, we were able to get a handle on really good health-care protocols," Gahler said.

With respect to response times, Gahler said an apparatus can roll out of the hall with three firefighters on it to begin the response to a call through 911. If the there are only two firefighters on duty, they must wait for paid response firefighters in the community to get to the hall to be able to roll out.

"With extra staff in the station, we are able to improve the maintenance of our fire apparatus and the station itself," he added. "We are able to increase our support capacity around programs and projects, and expand on training initiatives."

As for the future staffing of the department, the fire chief acknowledged that is going to for part of the upcoming budget discussions with council. He recommended that the department move toward a model where there are four firefighters on duty, 24/7, 12 months of the year.

"For 2021, we really would recommend moving ahead with peak staffing again if possible and this will be through the budget process," he said. "But if we could actually expand the program to cover as much of the year as possible, we will get all those benefits and those safety margins will come with that."

By moving towards that staffing goal, Gahler said it will reduce the number of general pages, and need for part-time firefighters to respond, it will reduce response times and support the other work the department does in the community.