CANMORE – Canmore’s fire fighters will be out in several neighbourhoods this weekend setting up defensive sprinkler lines to fight wildfires as part of an emergency preparedness exercise.
Sep 27, 2018 12:00 AM By: Tanya Foubert 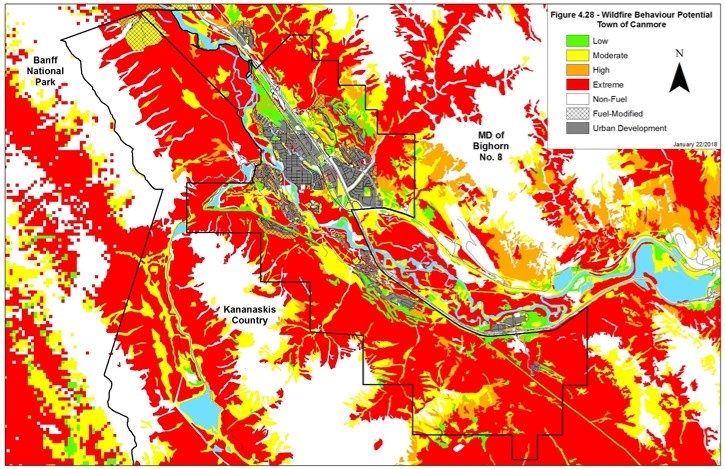 A map of the wildfire potential in the areas surrounding Canmore.

CANMORE – Canmore’s fire fighters will be out in several neighbourhoods this weekend setting up defensive sprinkler lines to fight wildfires as part of an emergency preparedness exercise.

The three-day wildfire sprinkler exercise begins on Saturday (Sept. 29) and Deputy Fire Chief Keri Martens said this week the goal of the work is to test out Canmore Fire-Rescue’s emergency response plans, which have been developed and reviewed earlier this year.

“Part of any good planning process is to test the plan,” Martens said. “It is very timely, the past two summers have reminded us we need to plan for these kind of events.”

The Bow Valley saw significant smoke impacts over the past two summers from wildfires burning across the Alberta-B.C. border in Kootenay National Park and throughout Western Canada.

While back-to-back intense wildfire seasons is a reminder, Martens said the wildfire strategic response plans and work with FireSmart in the community are ongoing processes for the Town of Canmore. Every year, the municipality’s protective services department has engaged in fuel reduction work in specific neighbourhoods that have development immediately adjacent to the surrounding forests.

But fuel modification alone is not enough to defend developed areas from an approaching wildfire. Wildfires in places like Fort MacMurray and Waterton have shown that when fuel reduction is combined with defensive sprinkler lines they can be effective as preventing structural fires within neighbourhoods.

Martens said practicing with a sprinkler line will be a valuable experience for local firefighters and the community and they are borrowing two sets of sprinklers from Alberta Wildfire for the exercise.

“In the event we need to deploy a large scale sprinkler system with a large wildfire approaching the community, we will have some practice with it and know what the equipment looks like and have training,” she said, adding there are also implications for the upcoming municipal budget cycle. “Part of what we are looking at in the budget cycle is to hopefully be able to get funding set aside to build our own sprinkler trailer for the fire department, so there is one here and we would not have to fully rely on these provincial trailers coming.”

Purchasing a sprinkler trailer, or developing one in-house, was one of 12 recommendations made to council as part of its Wildfire Mitigation Strategy review conducted earlier this year by Canmore-based Montane Forest Management’s Stew Walkinshaw.

Walkinshaw said the fact the Bow Valley is located within a dense evergreen forest puts it at risk for wildfire and there will always be a threat to the community. The implications for a mitigation strategy is that it not only needs to be updated, but areas of land that may have been worked on in the past need to be maintained into the future.

“We need to understand we will always have lots of wildfire threat in this valley and what we need to do is we need to focus on reducing that threat in important areas that are immediately adjacent to development and that is really where this plan focuses on,” he said.

The Town of Banff developed its own sprinkler trailer in 2003 at a cost of approximately $40,000.

The funding for the exercise this weekend comes from provincial grants for this particular kind of work. Canmore has received more than $500,000 since 2013 for conducting FireSmart work like fuel reduction and emergency exercises. Over the past 15 years, Canmore has removed fuels from 138 hectares of land using the FireSmart program and been contracted by the province to complete work on its lands within the Town’s limits.

On Saturday (Sept. 29), the sprinkler line will be set up in the Peaks of Grassi neighbourhood and near the Benchlands subdivision on the Silvertip side, lands owned and managed by the Alberta Conservation Association.

On Sunday (Sept. 30), the sprinkler will be set up adjacent to the Larch area and along Stoneworks Creek. On Monday (Oct. 1), it will be set up near RundleView and Homesteads areas.

Part of the exercise is to assess water supply as well, and Martens said she encourages the public to come and check out what is happening in their neighbourhoods and to have conversations around wildfire and FireSmart techniques to protect homes in the community.