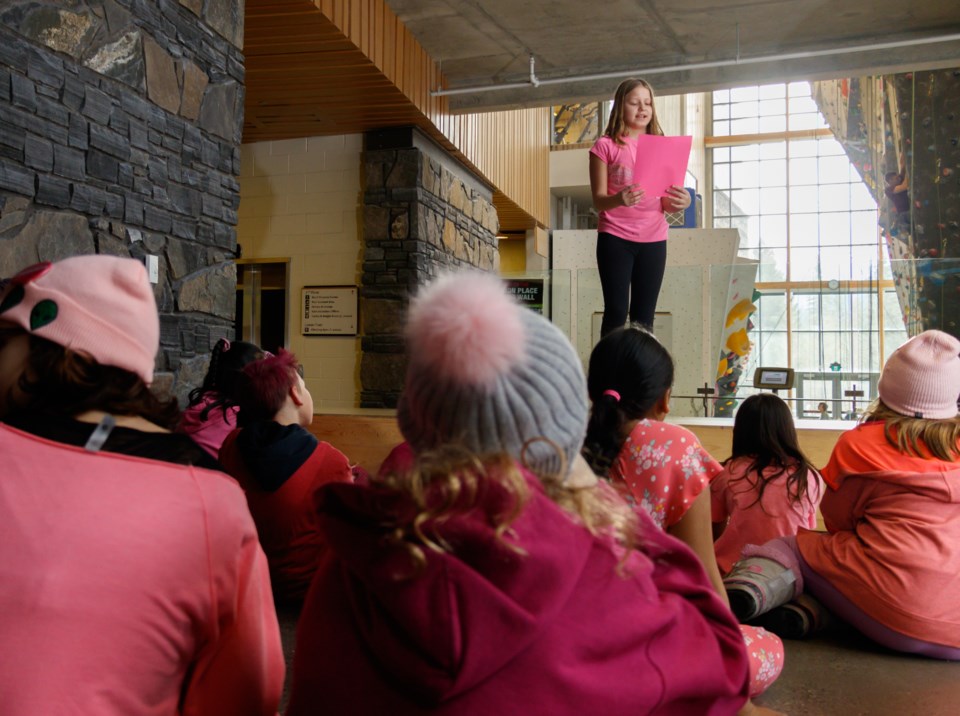 CANMORE – The written word can be a powerful tool to spread messages of hope, learning or love, and some of Canmore’s Grade 5 students are putting this power to the test in the form of poetry.

In honour of Pink Shirt Day, Lawrence Grassi Middle School’s Grade 5 students have written poems on bullying to be displayed at Canmore’s Public Library until the end of the month.

The students drew from a hat whether they would write from the perspective of a bully, the bullied, or a bystander, and the results were remarkably insightful.

“They had different perspectives that were randomly drawn so it doesn’t represent them,” explained LGMS teacher, Stephanie Kish. “Which to me makes this even more powerful because it could be someone that would never bully and yet… they have to actually think from that perspective now, take on that kind of role, and how they’d answer the questions if they were that person. To me it creates a deeper understanding.”

Kish was right in that students would think deeply about the role they were writing from, like Liam Stoppa, who had to write from the perspective of a bully.

“I wonder if anyone will ever like me. I hear words to stop but I won’t. I see tears. I want people to respect me.”

Stoppa said he believes bullies bully because of personal problems, like issues at home.

“I know that most bullies, they usually bully for a reason, like they go through things at home and then they take out their anger on others,” he said.

“When I was writing it, I was thinking about this… They need help, so if we raise awareness this will decrease bullying by getting these bullies help so they can talk about their problems.”

Another poem from the perspective of someone who is bullied touches on the mental health impacts it can have.

“I want to cry or disappear into a hole,” the poem by Laney Murdoch said.

“I feel completely hopeless. I touch my heart and feel it pounding every time that he comes near.”

For Murdoch, there’s a clear reason why bullying shouldn’t happen – it makes people feel bad. “It doesn’t make people feel good, [I] just want to stop it so that everyone can be happy,” she said, adding that there are ways to avoid bullying.

“You can try to help people… You can include people so that no one feels like they’re being bullied.”

The project, Kish said, was initially meant to be a one off last year just within the class, but Kish said when she read the poetry the 10 year olds produced, she knew it had to be more.

“The poems were so insightful and meaningful. I knew it had to be shared with our community,” she said.

“I didn’t know that this age group had that experience and reading those poems made me see that bullying happens at every age. It just brought that awareness to me.”

The Canmore Public Library subsequently teamed up with Kish last year to display the poems, and has enthusiastically asked to do so again. On Wednesday (Feb. 26), the students went to the library wearing their pink shirts to celebrate the official display, which will stay up until the end of the month.

“I’ve been trying to give them authentic tasks to be a part of, as well as to have an audience for their amazing work, because those poems are amazing,” said Kish.

Pink Shirt Day was inspired by a small town in Nova Scotia where a group of teenage boys wore pink shirts to stand up for another student who was bullied for wearing one. The small act of kindness sparked a global initiative around Canada with CKNW, a Vancouver news talk radio station, Kids’ Fund, officially naming a day in its honour.

“CKNW was inspired to help other youth affected by bullying, with many staff members wearing pink shirts and collecting funds to support Boys and Girls Clubs,” the website reads.

“Since then, the idea has only grown each year, with worldwide support and participation. Countries across the globe are now organizing anti-bullying fundraisers of their own, including Japan, New Zealand, China, Panama, and numerous others. In fact, last year alone, people in almost 180 countries shared their support of Pink Shirt Day through social media posts and donations. On February 26, 2020, we encourage everyone to practice kindness and wear pink to symbolize that you do not tolerate bullying.”

Visit the Canmore Public Library to read some of the poetry written by LGMS Grade 5s or pinkshirtday.ca for more on the initiative itself.