"The biggest conversation we have been having is around Main Street and how we would manage that, especially pedestrian traffic and to keep safe flows."
May 15, 2020 3:35 PM By: Tanya Foubert 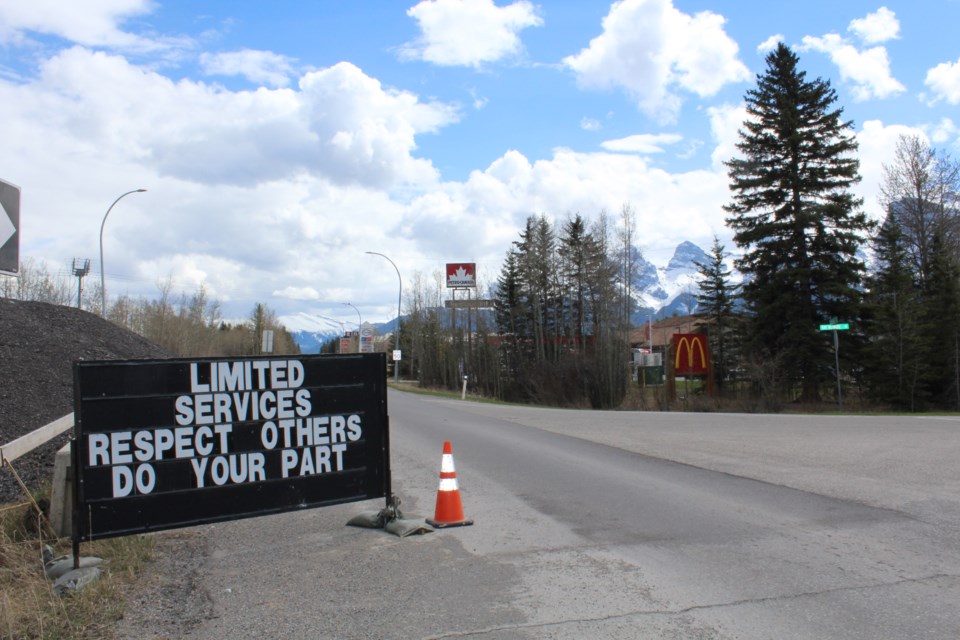 Messaging on the Town of Canmore's signs at entrances to the community remind visitors of limited services and encourage everyone to do their part to prevent the spread of COVID-19. TANYA FOUBERT RMO PHOTO

While Banff Mayor Karen Sorensen has asked residents of neighbouring communities in the Calgary region to consider holding off on plans to visit the mountain town until June, Borrowman said he expects to see visitation in Canmore this weekend.

"I would characterize it as a very cautious welcome," he said. "The mountains are not going anywhere, so if you can wait a bit to visit – that would be great.

"But people are allowed to travel more, so we know people will be coming to Canmore."

There is only one public washroom currently open within Canmore's downtown core and only limited services have reopened, he added. If people are coming to the community, the mayor urged them to bring their own supplies.

"And more importantly, stay safe and keep the distance," Borrowman said. "Our local trails are very popular and are not designed for large crowds keeping a two-metre distance."

On Thursday (May 14), Alberta began a phased economic relaunch of the economy. However, the cities of Calgary and Brooks saw their first phase of reopening delayed a further 10 days due to higher rates of infection due to significant outbreaks.

Certain local businesses that were closed since mid-March were able to reopen under new operating conditions to prevent the spread of the virus, like restaurants and cafés, museums and art galleries, and retail stores.

Provincial parks and recreation areas were reopened at the beginning of May to vehicle traffic and Albertans have been getting outdoors as a result. However non-essential travel is still not recommended.

The mayor noted that Canmore is completely surrounded by provincial parks, with several popular trailheads located inside the town limits. He said opening parks, but discouraging travel to mountain towns, has been a contradictory message from the province.

"I would say by reopening provincial parks immediately adjacent to the town of Canmore, the province is encouraging travel to our region," he said.

Coun. Joanna McCallum said the opposing messages from the province is something the municipality and business owners will have to balance moving forward.

On Tuesday (May 12), general manager of municipal services Sally Caudill said the ECC has been doing its best to prepare for reopening, given the limited information that has been available.

She said the municipality wants to support businesses that are allowed to reopen under the relaunch strategy and help the community feel safe.

"The biggest conversation we have been having is around Main Street and how we would manage that, especially pedestrian traffic and to keep safe flows," Caudill said.

That work has involved the Business Improvement Area (BIA), a membership-based organization that all downtown businesses are mandatory members of under regulations of the Municipal Government Act.

Caudill said the downtown business community is engaged in the conversations, which have been robust but not unanimous about the best way to move forward. It has been suggested that changes for Canmore's downtown be implemented at the same time provincial campgrounds open – June 1.

"We have been very clear that the reopening of Main Street is a decision of the ECC and it is purely around community safety," she said.

"This is not a trial, this is not about the future state of Main Street or downtown. This is an emergency decision around community safety."

BIA executive director Beth VanderVoort said meetings have been held with different sectors of the visitor-based economy and everyone is researching how to reopen safely.

"The major conversation over the last few days is how do we keep visitors, locals and staff safe," she said, adding there are concerns about potentially damaging Canmore's reputation if safely reopening isn't successful.

Questions are being asked around how to provide public washrooms when many businesses are not offering theirs to customers, and cleaning protocols for things like garbage cans and their handles, which must be touched to open due to being wildlife proof.

"Are we going to create extra seating in Friendship Park, at the Civic Centre or Seniors Centre for visitors to sit and eat," VanderVoort asked, as many local restaurants are still not allowing dine-in service.

She said the BIA board voted this week to recommend removing on-street parking along Canmore's Main Street for the May long weekend as an interim measure to provide more space.

Manager of public works Andreas Comeau said his department has been looking into temporary washrooms for the public in the downtown core. The only public washroom currently available is in the former visitor information centre, with the Civic Centre's washroom not expected to open until that facility is allowed to reopen its doors until later stages of the relaunch strategy.

"We are in contact with a supplier, and we may not be the only ones," Comeau said.

He added that personal protective equipment and protocols for Town staff to clean the washrooms are also needed.

Manager of engineering services Andy Esarte said it would take 10 to 14 days to make the necessary adjustments to accommodate changing two blocks of Main Street into a pedestrian and cyclist only environment. The closure would begin at Sixth Avenue and extent to Eighth Avenue – from the Bank of Montreal to Alpenrose Gifts.

Changes that are needed to accompany a closure of the road include a scramble crosswalk at Sixth Avenue, barricades and gateways to enter the area, as well as signage.

"The idea is to move primary movement onto the street itself," Esarte said. "Essentially we would be using the vehicle travel lanes for people and bikes. What that leaves on the outside is extended frontage for businesses."

Accommodations being considered for businesses include outdoor seating areas for restaurants and cafés, outdoor vending and sales racks, and tents for change rooms.

Vehicle movement is expected to be redirected to 10th Street, as well as down Sixth Avenue and along Seventh Street.

Esarte said a three-way stop is under consideration for 10th Street at Eighth Avenue to decrease the flow of north-south vehicle movement. He added a median and two-stage pedestrian crossing would be included that change of design.

Accessible parking stall locations along Main Street would also be relocated onto the nearby side streets. Esarte said the change would not significantly increase walking distances to nearby shops.

While the proposed changes will not be in place for the long weekend, the mayor noted it is important to not wait too long to take action.

"I think we would all agree that we do not want to wait until we have problems," Borrowman said. "[We should have] changes in place before it gets crazy."

Miclette said 40 per cent of local businesses were not sure if they would reopen if they got the green light from the province to do so this week.

"The challenge for business owners is how do they accommodate the potential of people coming to stores and in a way that is safe for staff and customers," she said.

TCK operations manager Rachel Ludwig said now is the time for the tourism industry to work collaboratively towards short-term and long-term recovery.

"The tourism industry, not only in the Bow Valley, but in Canada and really worldwide, was hit exceptionally hard and we are not anticipating a quick recovery," Ludwig said. "While we are starting to see businesses reopen now, there will be considerably less visitation and visitor spend this summer."

TCK conducted a visitor sentiment survey at the beginning of May, and Ludwig said the results showed three-quarters of Albertans are looking for experiences that allow safe distancing.

Whether that is going outside for a hike and getting fresh air, or curbside takeout and delivery from local food establishments – physical distancing was considered important.

Ludwig said the survey showed that 30 per cent said they would start travelling once restrictions on non-essential travel are lifted, most want to stay within Alberta and they are willing to drive up to three hours away.

"This gives us a clear indication that travellers need to feel safe in order to consider travelling again," she said. "This will be our No. 1 question going forward.

"Although I do not anticipate a mad rush of visitors this May long weekend, it is important to show visitors we care about their safety and are putting measures in place."

TCK's messaging for potential visitors heading into the weekend was to help keep the community safe.

Chamber of Commerce board chair Cheryl Cooper said within her membership there are many conversations around the need for clarity of what is safe and not safe for local businesses to do.

"We are all figuring this out as we go along," Cooper said. "There really isn't a hard and fast set of rules that have been set out for any of us through all of this."

She said, however, that every single business gets to make the choice of whether or not it is ready to reopen.

"We are trying to encourage people to go with the flow and stay tuned for updates," Cooper said.

Last week, Alberta's Chief Medical Officer of Health Dr. Deena Hinshaw indicated it was safe for second homeowners to travel to their recreational properties. With 20 per cent of Canmore homes being owned by non-permanent residents, the influx of this population into the community has been a concern for locals.

"Responsible travel to these locations within the province is permitted with consideration to community guidelines," Hinshaw said. "Travel to summer homes outside the province is still not recommended.

"I encourage any person considering travelling within the province to respect the health and safety of these small communities."

Hinshaw asked visitors to limit stops when travelling, to bring their own supplies and consider downloading the ABTraceTogether app.