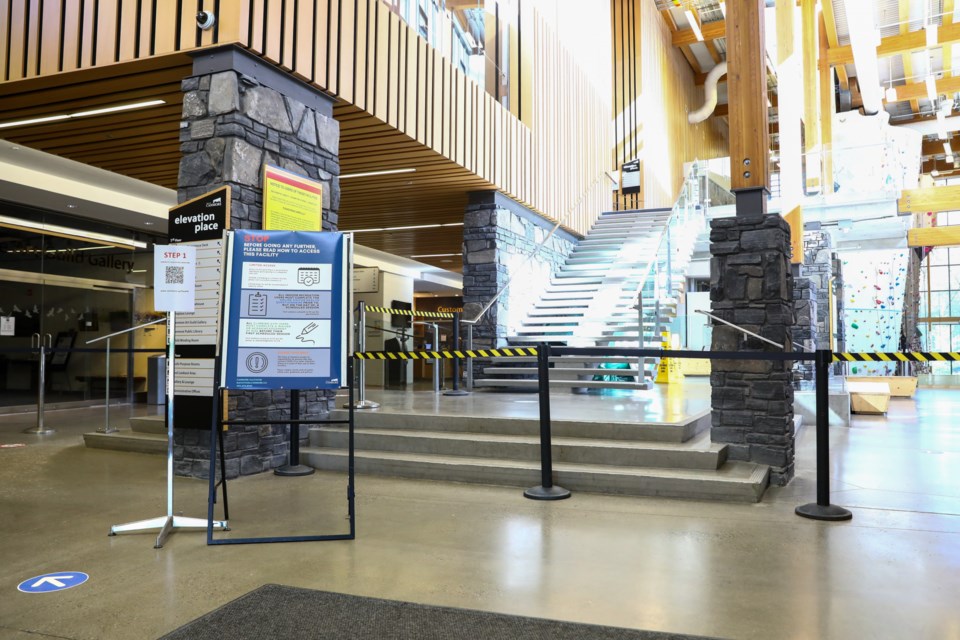 Elevation Place reopened to the public on Monday (July 20). The climbing gym and fitness areas were reopened at a reduced capacity. EVAN BUHLER RMO PHOTO⁠

BOW VALLEY – The Town of Canmore and the MD of Bighorn have reached an agreement on how the latter will share the cost of recreational services accessed by its residents at Elevation Place and the Canmore Rec Centre.

The previous agreement expired on Dec. 31, 2019 and the new agreement sets out conditions that the MD will pay an increasing rate over a six-year term until the negotiated cost recovery rate of four per cent of the net operating costs for the two facilities is reached.

Canmore's Chief Administrative Officer Lisa de Soto presented the agreement for council to authorize at its regular meeting at the beginning of December and noted the process to reach a new agreement began in summer 2019.

"It took that long to negotiate because there were some fundamental changes to the Municipal Government Act that also required us to establish an inter-municipal collaborative framework (ICF) with the MD," de Soto said.

"It took us until March of this year to negotiate that ... the purpose of an ICF is to ensure that municipalities contribute funding to services that benefit their residents."

She said negotiations for the new agreement sought to change the contribution from being based on what the MD was willing and able to pay, to a cost-sharing model. It is one of several agreements between the two municipalities that sets out rates for shared services like utilities and emergency services.

"We have moved towards a fair and equitable cost-share agreement, one that has a calculation methodology that we can rely on and show our constituents how it is equitable across jurisdictions," de Soto said. "That took quite a bit of time and effort to negotiate."

According to the staff report, the 2020 net operating costs for the two recreation facilities in Canmore was $2.76 million and the allocation for the MD to pay negotiated in the new agreement reaches $110,271.

The agreement, however, included a phased approach and begins with the equivalent to the 2019 contribution of $47,020, increasing at a rate of seven per cent until the full amount is reached.

"We have kept the rate for 2020 the same for 2019 just given that our recreation services were mostly closed due to COVID," de Soto said.

One of the compromises reached in the agreement, said de Soto, is that inflationary factors and cost increases over the course of the contract are not included.

"The agreement specifically states that re-negotiations contemplated in 2025 will have those cost increases to truly reflect the cost of the day," she said.

The MD of Bighorn council voted in November to authorize the agreement.

Mayor John Borrowman said the new agreement is a good example of compromise, and while the process to reach it was challenging at times, residents of both communities will benefit.