“By providing options, more people will choose them. If you have to drive, that space on the road won’t be taken by everyone in the community. You’ll see people walking, bicycling, taking transit, those are all people you’re not parked behind or fighting for parking spots. It’s born out of necessity that we move to a place where people have freedom of choice for transportation.”
Jun 1, 2021 9:00 AM By: Greg Colgan 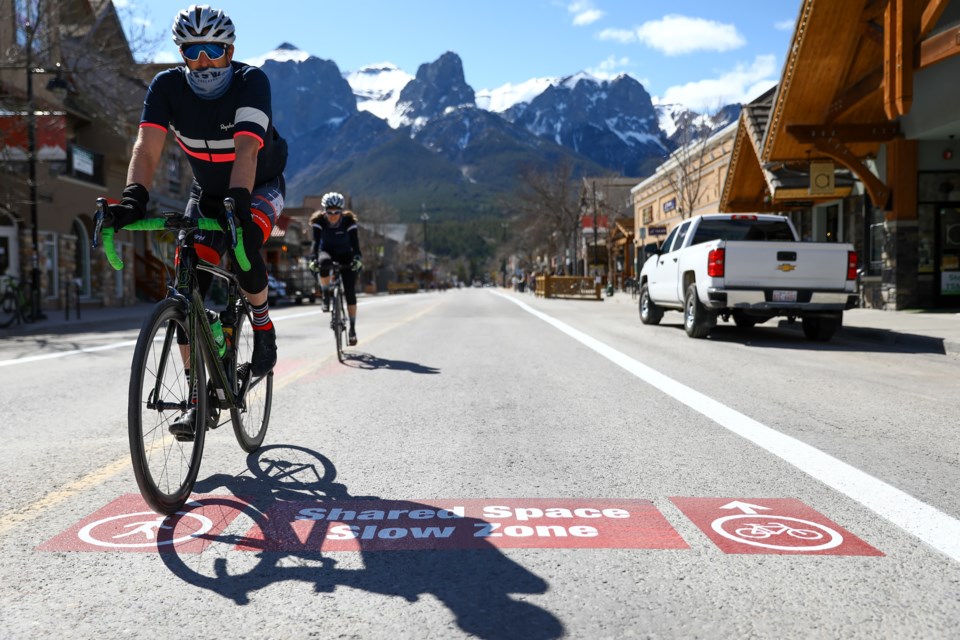 A pair of cyclists ride along Main Street after it was closed to vehicle traffic on Wednesday (May 5). The aim of the closure is to provide more space for pedestrians to practice physical distancing, and to provide local businesses with more space for customers. EVAN BUHLER RMO PHOTO

CANMORE – Canmore has pledged itself to being a cycling friendly community.

The hard work has not gone unnoticed.

The Town was recognized by the Share the Road Cycling Coalition’s Bicycle Friendly Communities award program along with 12 other Canadian municipalities.

“What’s important is that we are providing people with viable travel options. Many do not have freedom of movement in that you’re generally provided an option to drive and perhaps some freedom to take some limited transit,” Andy Esarte, the Town of Canmore’s manager of engineering, said. "What we’re trying to do is work towards the transportation system in Canmore where we have true freedom of mobility.

“That means when people choose to bicycle they can do so safely, comfortably and conveniently. When they choose to walk, there are safe and accessible sidewalks to connect them from their home to businesses and community areas and that there’s a transit system effective and convenient and accessible as well. This recognition shows that we’re taking steps towards that in one of the more challenging  areas for communities which is providing cycling infrastructure.”

Cycling has been a growing form of transportation in recent years in North America, but during the pandemic people have turned to bikes to help get around or for exercise.

Municipalities have also been progressive in shaping their infrastructure to include safe forms of transit to allow cyclists, pedestrians and motorists to share the road.

"Our recipient communities range in size from under 15,000 people to over one million, and have varying climate conditions and geography,” Dr. Subha Ramanathan, Share the Road’s bicycle friendly communities manager, said in a media release. “This demonstrates that any community can be bicycle friendly.

"While no two communities at a given award level look the same, there is a shared commitment to provide residents and visitors with options and opportunities to cycle. There are many paths to becoming bicycle friendly. Our BFC award program helps communities track their progress, learn from one another, and receive public acknowledgement for their efforts. The structure and feedback that we provide encourages continuous improvement over time."

The award program has been in existence for more than a decade and helps provide communities with a roadmap to evaluate the current conditions for cycling and guidance in helping safe cycling transit.

Esarte said the Town will receive four plaques from the group, which will be placed near different cycling paths in the community.

The program, which is run with the Canadian Automobile Association, gave silver and bronze awards to 10 municipalities, while three others received honourable mentions.

Since its creation in 2010, 49 communities have been awarded and 14 more received honourable mentions.

Canmore has been among the more progressive communities in Canada for creating cycling safe infrastructure and innovative programs. The progress has been taking place since the early 2000s and ultimately led to Canmore's integrated transportation plan in 2013, Esarte said.

In 2019, the Best of the Bow readers choice award for best use of tax dollars in Canmore was the ongoing efforts to incorporate dedicated bike lanes into the transit network.

The construction at Benchlands Trail and Bow Valley Trail intersection – while frustrating in the short-term – will give long-term benefits to all modes of transit and increase safety. Near-side traffic lights are being installed and dedicated bike lanes created as part of the town’s transportation improvement program.

“By providing options, more people will choose them. If you have to drive, that space on the road won’t be taken by everyone in the community. You’ll see people walking, bicycling, taking transit, those are all people you’re not parked behind or fighting for parking spots. It’s born out of necessity that we move to a place where people have freedom of choice for transportation.”