As of Wednesday (July 1), the Town of Canmore began reopening its facilities, however those hoping to swim at Elevation Place will have to wait until August due to a broken light fixture over the pool that needs to be replaced. Those who want to use the fitness centre and climbing wall will be able to do so by reservation beginning mid-July.
Jul 3, 2020 11:55 AM By: Tanya Foubert 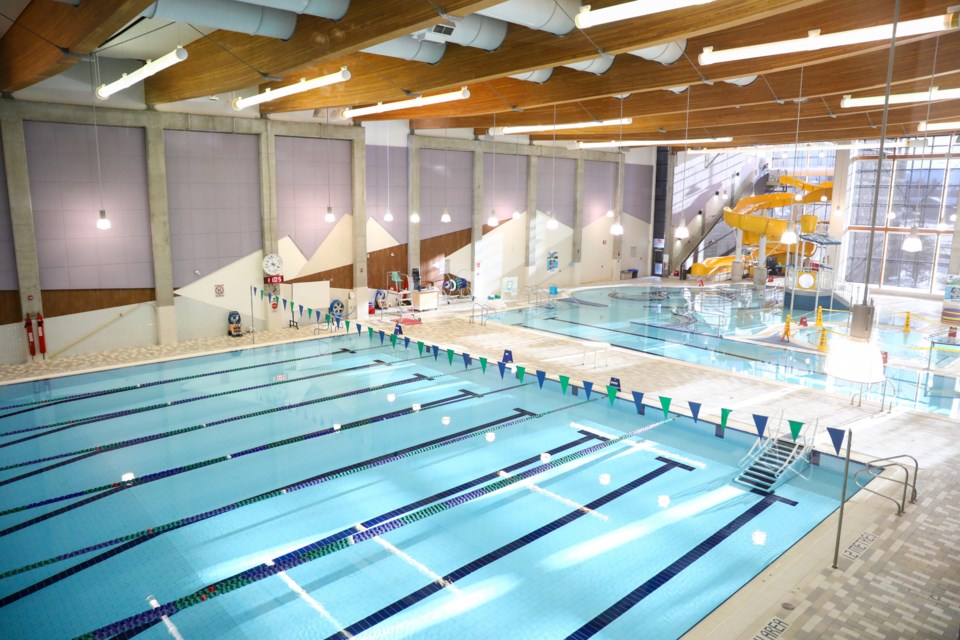 The Elevation Place aquatics centre will not reopen until early August due to the municipality working to replace a dislodged lighting fixture above the pool. RMO FILE PHOTO

CANMORE – The Town of Canmore's facilities and recreation centres have begun to reopen, but residents can expect operations to have a "new normal" due to COVID-19 restrictions.

Mayor John Borrowman said residents and visitors who use municipal facilities will find operations have adapted to respond to public health guidelines around preventing the spread of the coronavirus.

"We need to be able to manage the number of people in the buildings and in the various areas of the buildings," Borrowman said. "Administration has been working on reopening plans pretty much since we closed, but we expected [reopening] would not be allowed to happen until the fall."

The reopening of recreation facilities, like gyms, pools and fitness centres, was originally included in phase three of the Alberta government's phased economic relaunch strategy. However, earlier in June, Premier Jason Kenney announced those types of facilities could open during phase two, which began July 12.

Earlier this week, the Town of Canmore announced its phased reopening for facilities. As of Wednesday (July 1) the Canmore Rec Centre can be accessed by gymnastics clubs, summer camp participants and groups renting space, however it is not open for public access.

As of July 13, the Civic Centre will reopen for appointments and walk-in services such as paying a bill, fine or general inquiries. The washrooms in the building will be reopened to the public.

The mayor said he hopes that in-person public council meetings can resume, with modifications to allow for physical distancing and adapting to allow councillors to participate online if that is their preference.

"And of course we have to also make sure the public has full access to take part and watch the meeting," Borrowman said.

Elevation Place is expected to reopen mid-July for users of the climbing wall and fitness area, however no core classes will be available.

Borrowman said a significant change for Elevation Place users is going to be that use of those recreational facilities is by reservation only – online or by phone.

Elevation Place members will be able to reserve climbing and fitness spots up to 72 hours in advance, while non-members will have a 48-hour window to book. Change rooms and showers, however, will not be accessible to users.

Meanwhile, the Canmore Public Library continues its curbside pickup service and is working on its reopening plans.

The aquatics centre is expected to reopen in early August, subject to the replacement of a lighting system above the pool. Borrowman said a fixture recently dislodged from the ceiling creating a risk to public safety and that must be fixed before the pool can reopen.

"This is the primary challenge of getting the pool reopened," he said, adding annual pool maintenance has already taken place, so its annual September closure is no longer needed.

Current pool memberships will remain on hold, said the mayor.

"There will also be for seniors and [those with compromised immune systems] times available for those who need controlled access," he said. "Within the facility, washrooms, water-bottle-filling stations and vending machines will be available."

The Alex Kaleta ice arena at the Canmore Rec Centre is set to reopen early in August as well and will be available only for bookings. No public ice skating time will be programmed and the Thelma Crowe arena will reopen in October as per its regular ice schedule.

Good Earth Cafe in Elevation Place and the Bear Bell Grill in the Rec Centre will reopen once facilities return to full operation.

Go to the Town of Canmore's website page dedicated to actions taken in response to COVID-19 for more information.

CORRECTION: A previous version of this story incorrectly reported that the Canmore Museum and Geoscience Centre would be reopening in mid-July.