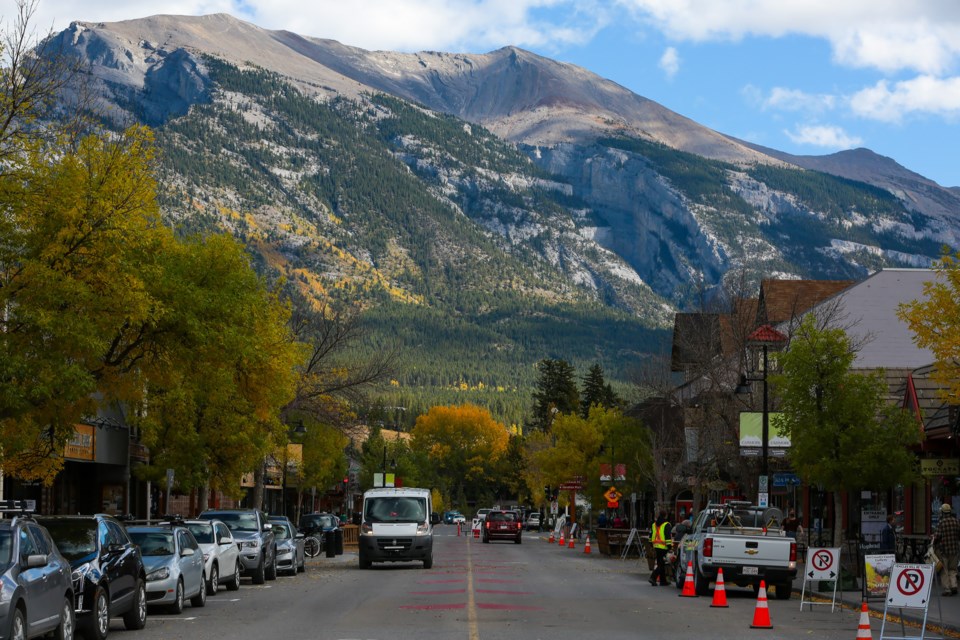 Vehicles drive along Main Street in Canmore after the Town reopened the street to vehicle traffic on Thursday (Sept. 24). EVAN BUHLER RMO PHOTO

CANMORE – Canmore's elected officials have taken an estimated $1.3 million surplus from last year to reduce the 2021 municipal property tax rate to 4.5 per cent from the originally proposed 8.1 per cent.

Elected officials considered a number of municipal tax rate scenarios for 2021 during their meeting on Tuesday (Feb. 23), including a rate of 2.5 per cent, but landed on the approved motion to support the 4.5 per cent increase as the most reasonable approach when considering the effect in future tax years.

The revenue needed from taxes to help pay for the $57.8 million operating budget is $26 million, after council voted to use $500,000 of the surplus and $400,000 in taxes expected from new growth this year to reduce the tax rate.

Councillor Karen Marra supported the motion to amend the budget to reduce the tax rate to 4.5 per cent, noting that a 2.5 per cent rate in 2021 would lead to a 11 per cent municipal tax increase being considered next year.

"I know we did our best in 2020 to hold the line," Marra said. "I do not want to hinder future councils and there are areas where we can be more cost effective."

Mayor John Borrowman said he prefers to focus on how the percentage increase affects property tax rates on a monthly and yearly basis. At 4.5 per cent, that equals an increase of $10 per year for every $100,000 of assessed value.

"What really matters is the actual monthly increase to costs for residents and I know from having been through this discussion many times," he said.

Coun. Joanna McCallum said she would like to see administration and the new council undertake a comprehensive service review process as part of the next budget development and approval process.

She noted that changes to the tax rate in 2021 has a cascading effect in future years that needs to be considered. With a 4.5 per cent rate set for this year, the next council is working with a proposed 7.1 per cent increase in 2022 and 6.8 per cent in 2023 as a starting point.

"I really do not know if we can set the next council up for success based on what we are going through as a municipality, but we can try," McCallum said.

Coun. Rob Seeley voted against the tax rate change amending motion, saying he wanted tax rates to be decreased to 2.5 per cent instead.

"I would prefer to have 2.5 per cent this year and take a look at next year when it gets here," he said.

Manager of financial services Chelsey Richardson said that the traditional budget approval process, which usually occurs in December, would not have allowed council to consider using the estimated 2020 surplus to reduce the tax requisition.

Richardson provided a high-level overview of the various factors affecting the budget in terms of revenues and expenses. That includes an assumption of $400,000 in taxes from new growth in 2021, which dropped the tax rate by 1.6 per cent.

Included in the budget, said Richardson, are $370,000 in increased costs for the RCMP contract as a result of a new contract; an additional $60,000 for Volker Stevin for increased service levels for snow clearing; and debt servicing of $131,000 related to the Cougar Creek debris flood retention structure.

The budget includes $211,000 for a cost of living increase for all staff, however a budget for performance pay was removed for 2021.

The capital budget, on the other hand, includes $13.8 million in projects for this year, including the $3.3 million south Bow River loop feeder main utility project, $2.8 million for flood mitigation in Stoneworks Creek, $650,000 for street and drainage improvements and $1.4 million to begin work on a new fire hall.

"We believe we have the funding envelope and capacity to deliver on the projects that were put forward," Richardson said.

The 2021 budget also included $4.4 million in transfers to reserve accounts, including the asset rehabilitation and replacement reserve; offsite levies; the sustainability reserve and art trust reserve. The balance for all reserve accounts for the municipality in 2021 is expected to reach $34 million.

General manager of corporate services Therese Rogers pointed out that council spent 15 hours in finance committee meetings deliberating on the budget and making changes to it.

"Council established the finance committee to assist in fulfilling your financial oversight responsibility, and really the purpose of that is to allow you to demonstrate fiscal responsibility in a transparent and public manner," Rogers said.

"The budget that was presented to council and subsequently amended is aligned with council priorities, as identified in the strategic plan," Rogers said.