“The recommendation I’m going to put forward is that council direct administration to create a seasonal, safe, overnight parking program for council’s approval that utilizes community partnerships and has clear criteria for participation."
0
Oct 9, 2019 9:56 AM By: Alana MacLeod 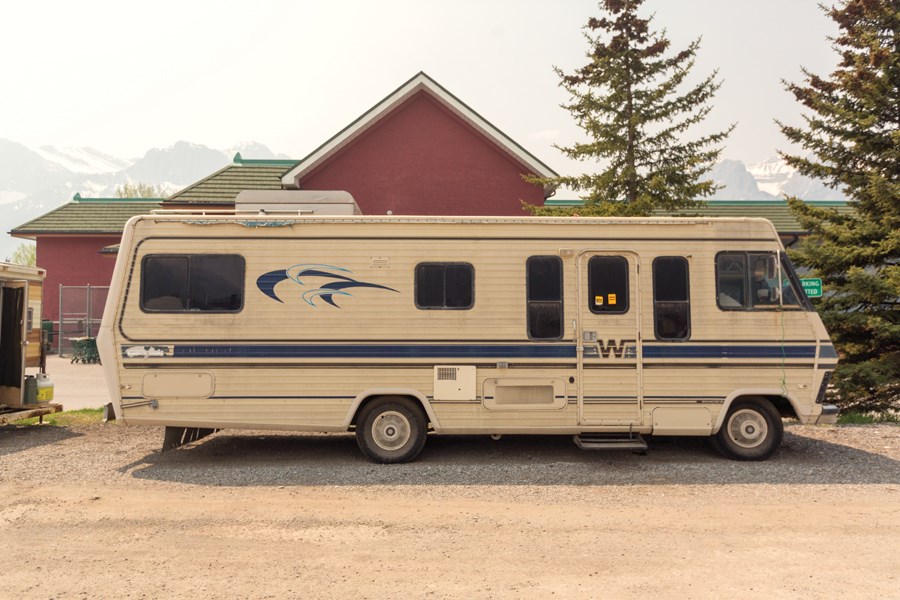 A camper van in the area known as Vanmore behind the Save-On-Foods in Canmore on May 28. RMO PHOTO

Those are three questions outreach worker Travis Reynolds has heard over-and-over again during his time researching what has come to be known as Vanmore.

The vehicle-dwelling area behind Save-On-Foods, and other parking locations in Canmore, has created a lot of hype, even inciting interest from media outlets across the country, and after the Town of Canmore’s latest council meeting, a plan has been put forward to try to accommodate those who want, or need to live in their vehicles.

“The recommendation I’m going to put forward is that council direct administration to create a seasonal, safe, overnight parking program for council’s approval that utilizes community partnerships and has clear criteria for participation,” said Reynolds at the Oct. 1 council meeting.

“This recommendation is underscored by three sort of main factors or contributors. The first that more people are choosing to live in their vehicles, the second that many businesses are finding it difficult to attract and retain staff and a number of vehicle dwellers work in town, and accommodations in Canmore are often unaffordable, or unavailable, to people living in their vehicles.”

The Vanmore trend became noticeable in 2018, with three parking lots identified as the main areas of dwelling – the gravel lot behind Save-On-Foods, the Home Hardware parking lot, and a parking lot adjacent to Elevation Place.

In terms of the three questions Reynolds has been hearing frequently, the answers aren’t new. Rental rates are high and in early August, the Outlook reported rental rates in Canmore have increased 71 per cent since 2016.

Staff accommodations are often unavailable or declined because they were too expensive, in poor condition, or tied to the employer. As for campgrounds, they can also be expensive ($26.50 a night for an un-serviced spot), and, even more so, in the Bow Valley, which attracts millions of tourists each year, campgrounds are most often full or reserved months in advance.

After putting forth the recommendation, Reynolds further explained if “the motion is defeated, council could opt for a municipal-wide ban on overnight parking.” However, Reynolds said it’s unlikely this would be successful.

“It should be noted that this ban would not necessarily prevent people from living in their vehicles and staying in town,” said Reynolds.

“As well, additional resources will be required for that enforcement, and staffing needs of local businesses may be negatively impacted by it.”

At the Committee of the Whole council meeting in September, Reynolds presented research on the subject, including the concerns raised around vehicle living in the community.

“As of May of this year, that lot became completely full and a number of issues were identified based upon the situation,” he told council.

“These issues included things like derelict vehicles being parked in the lot, individuals storing things underneath their vehicles, vehicles just being stored there like trailers, a number of unregistered vehicles being there, and individuals setting up semi-permanent structures such as awnings and patios.”

As a result of the various concerns, Canmore council approved two motions earlier this year. The first motion was to institute a parking restriction that would ban vehicles from parking in identified lots between 7-9 a.m. in the morning. The second motion was to hire an outreach worker to better understand and help identify the demographic. Since being hired, Reynolds has been actively engaging the Vanmore community, speaking with 30 individuals living out of their vehicles with interviews ranging anywhere from 15 minutes to two hours.

“I’ll support this motion, I note that which ever motion we choose, whether we defeat this and go to a full ban, regardless we are going to be paying money and that’s not a criticism, that’s just a clear fact,” said Councillor Joanna McCallum.

"Those are all the same expectations I will have with regards to whatever program is created and presented to council moving forward. Even with our most vulnerable … we have stated it’s appropriate and fair to pay what you can afford to pay.”

Coun. Esme Comfort also supported the motion, saying it’s the research has shown there is a clear need for this kind of accommodation in Canmore.

"And also that it won’t go away if we ban [overnight parking], we’ll just create more problems for ourselves and those individuals,” she said.

“I look forward to the solutions put forward.”

Reynolds said he’s hoping to be back before council in December, January at the latest, with clear plans for location, eligibility guidelines as well as safety and enforcement guidelines.

Canmore learns those living in vehicles willing to pay to park overnight
Sep 27, 2019 8:00 AM