The cell tower would emulate a pine tree, called a monopine, and would be a Rogers Wireless cell tower, located closely to Pumphouse 1 where a Telus monopine is also located
Nov 13, 2019 3:00 PM By: Alana MacLeod 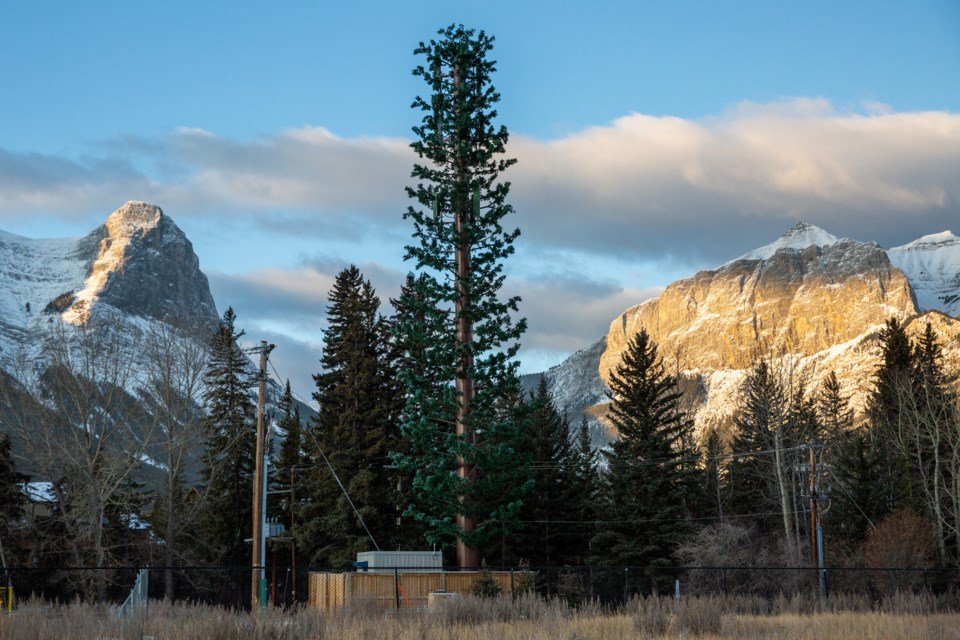 A Telus cell tower that looks like a pine tree located in Canmore near Elevation Place and Pumphouse 1. Rogers has proposed developing a similar cell tower in the same location. EVAN BUHLER RMO PHOTO

CANMORE – The Town of Canmore may see a second cell tower that looks like a pine tree erected across the street from Elevation Place.

The cell tower would emulate a pine tree, called a monopine, and would be a Rogers Wireless facility, located closely to Pumphouse 1 and on municipal land, with a Telus monopine already in the area.

“We have received an application for municipal concurrence for a new cell tower – and this is a Rogers tower,” said Tracy Woitenko, development planner for the Town.

Innovation, Science and Economic Development Canada is the federal agency with the approval authority for cell towers, however, companies are required to consult with municpalities and address land use concerns. The federal agency also requires companies consider co-location on existing towers before proposing new ones.

According to the staff report to council, it was not possible for Rogers to use the existing Telus cellphone tower for its infrastructure due to its design as a monopine. The report also detailed that Rogers was considering a location in the CP Rail right of way, but the municipality preferred situating the new tower next to the current one on municipal land.

During its regular council meeting on Nov. 5, Woitenko said two overhead powerlines must be buried in order for the site to be feasible for Rogers to construct the 30-metre tall monopine and the company has agreed to complete that work. She added the burial of the powerlines would be required in the future anyway, as it benefits the municpality's future plans for the overall area, which includes a new asphalt pathway, dog park, parking lot and other amenities.

“So in the lease negotiations with Rogers, we’ve proposed a reduction in rate. We currently charge Telus $17,000 a year for the Telus site, so we’ve proposed to reduce it to $10,000 for that 10 years to help [Rogers] recuperate some of those costs of burying the power line.”

Mayor John Borrowman pointed out that at the end of the day, the Town would then have still have covered cost of the burial. Woitenka added the cost estimate is that it would be more than $80,000, likely to be closer to $150,000 to complete the work.

Rogers Wireless still requires other approvals because of the location's proximity to the highway, CP Rail, etc., but the Canmore council voted unanimously to direct administration to submit a statement of municipal concurence to the federal regulator for the proposed tower.

The company conducted an open house consultation at Elevation Place in September. Rogers also received a letter of concern from one nearby resident of Spring Creek Mountain Village, whose name was redacted from the staff report.

In the letter, the resident expresses concerns about the number and age of trees to be removed from the municipal parcel of land to accommodate the new monopine, as well as the process to determine that as the preferred location.