A growing body of evidence shows the harmful effects of digital devices on children and youth, with some studies suggesting youth on average can spend more than seven hours a day glued to screens
0
Sep 19, 2019 2:00 PM By: Cathy Ellis 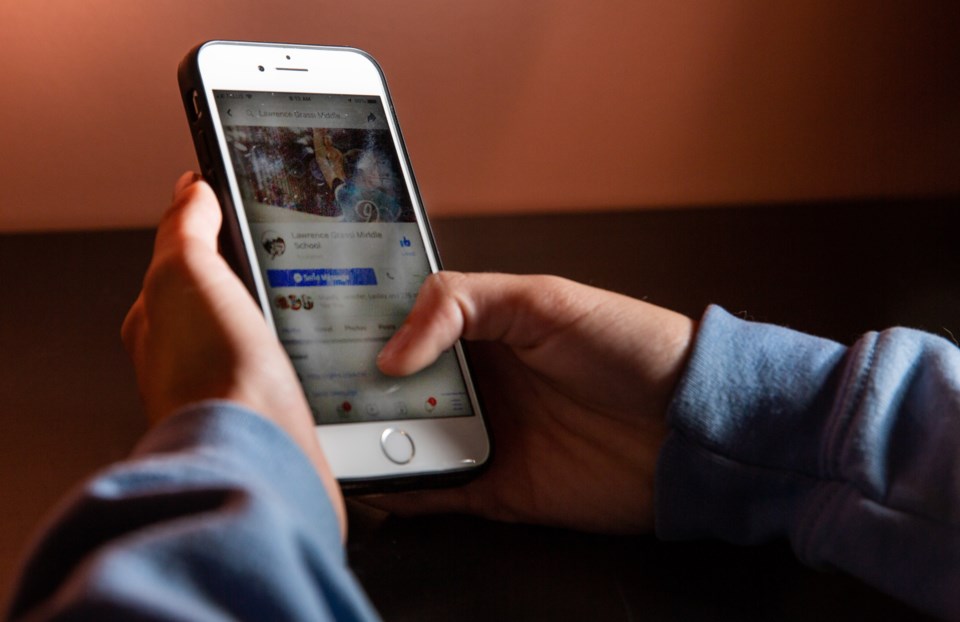 A new pilot program at Lawrence Grassi Middle School in Canmore bans the use of personal digital devices, including cellphones, must be in student backpacks, or lockers, from the start of homeroom until after the last class of the day, including morning and lunch breaks, while on school property. EVAN BUHLER RMO PHOTO

BOW VALLEY – A mounting body of evidence shows the harmful effects of digital devices on children and youth, with some studies suggesting youth on average can spend more than seven hours a day glued to screens.

While voicing support for the appropriate use of digital devices for education purposes, ongoing research has prompted Lawrence Grassi Middle School to take a bold step to ban digital devices, including cellphones, outside of class time.

Under the pilot in the Grade 4-8 school, personal digital devices, including cellphones, must be in student backpacks, or lockers, from the start of homeroom until after the last class of the day, including morning and lunch breaks, while on school property.

Nadine Trottier, LGMS principal, said devices such as tablets and personal laptops may be used as a learning tool during instructional hours, under the direct supervision of a teacher, but not during breaks.

“It’s definitely a change in mindset, a game-changer and we feel very optimistic that this pilot project will have positive outcomes for both students, staff and parents,” she said.

“At the end of the day when we talked as a staff and with parents, if you look at the research, it does seem it’s the higher road to take for the benefit of this generation.”

Excessive screen time – on video games, smartphones, tablets, computers and television – is considered in some circles as a public health issue given ongoing research showing the negative effects on children’s physical, mental and social health.

In what is considered one of the most groundbreaking studies on the issue, researchers at San Diego State University suggest more than one hour a day of screen time for children ages two to 17 is associated with lower psychological well-being.

The study, which examined a large random sample of more than 40,000 children ranging in age from two to 17 years old, found the most significant effects were among 14 to 17 year olds who were essentially glued to their devices for seven or more hours per day.

“These users were twice as likely to have been diagnosed with depression or anxiety or sought help for a psychological issue in the past year,” according to the study, which was published in Preventative Medicine Reports.

Researchers from the Alberta Teachers’ Association, the University of Alberta, Boston Children’s Hospital and Harvard Medical School are working on an initiative to better understand the scope of physical, mental and social consequences of digital technologies.

Early key findings indicate that although digital technologies can enhance teaching and learning activities, digital technologies, particularly cellphones, are a growing distraction in schools. The ability of students to focus on educational tasks has decreased, anxiety has increased, and students are coming to school tired.

Trottier, who referred to that research, said LGMS went to exhaustive efforts to survey staff, parents and students on the issue, which was originally brought up by the school’s parent council.

She said there are ongoing conversations with staff as the new policy is implemented and reinforced with students.

Based on the parent survey, Trottier said she understands parents send a device with their child either for safety reasons, or to change plans.

With that in mind, she said students are welcome to use the school phone to call home, and parents can call the school office if they need to get an important message to their child throughout the school day.

“As long as your child keeps their cellphone in their locker and then at 3:21 p.m. when the bell rings, they can use them and see what mom says about a change of plans,” she said.

The results of the student survey had some interesting comments.

Trottier said some students admitted they were addicted to their devices.

“Some actually said word-for-word that they would be in favour of no devices during breaks, because then all of their friends and themselves would socialize more, but then there were a few that were very blunt and honest about it and said, ‘no, we’re going to go to the washroom more often,' ” she said.

“Some of them said they like to be on their devices because they feel bored,” she said, but added the school’s response to that was to read more books, or join one of the school’s 13 clubs.

Trottier talked about the distractions of cellphones to learning.

“We were finding students were coming in and being distracted by Snapchat conversations, they were getting so emotionally tangled with texts and conversations, that they couldn’t get into that learning zone,” she said.

“I’m not saying that cyber bullying isn’t going to happen because of this policy, but you have a safe zone now where they don’t have access to it, it’s like a form of protection to them in that sense.”

This year, Our Lady of the Snows (OLS) Catholic Academy also came out with a new policy.

The students were asked to sign an acceptable use of technology agreement, which states that technology will be used for educational purposes while in school, unless a teacher has granted an exception.

This applies at all times, including lunch hours, spares, transition and break times, and prohibits playing games, watching videos, accessing social media, emailing for social reasons, or having windows to these activities open.

Jamie Landry, OLS principal, said students are allowed to use cellphones and other devices for educational purposes in class.

“For educational purposes they are able to have a their cell in class when they’re permitted to," he said, noting cellphones can still be used for emergency purposes.

“Ultimately, what we’re doing is trying to encourage more face-to-face interaction, while at the same time, discouraging kids having their phones glued to their face when they have the ability to interact with peers.”

The technology agreement and policy follows on the heels of the school’s #relationships, a division-wide initiative

Landry said in his 14 years in education, including six years in administration, he’s noticed an uptick in the use of cellphones in schools.

“I would certainly say there has been an increase in use, and particularly in inappropriate use,” he said, noting there can be peer-to-peer bullying on social media and students have access to anything on the Internet.

“Ultimately, this is also a way to reassure parents that we’re being very diligent in the content that students are accessing … and from our vantage point, it’s a bit of liability issue, so we want to be able to assure parents that they’re only using these cellphones for educational purposes.”

A Nature Canada report, Screen Time vs Green Time, released last November found that 87 per cent of pre-school children and 85 per cent of school-aged children do not meet the guidelines for adequate sleep, physical activity and screen time.

It found that students in grades 7 to 12 are spending up to seven hours a day on screens, more than three-and-a half times the recommended limit of two hours per day by the Canadian Pediatric Society and other organizations.

Higher durations of screen time were a linked with poorer behavioural conduct and lower self-esteem, and adolescents who spend more time on social media and smart phones are more likely to report mental health issues such as anxiety and depression.

The author of the study, Jill Sturdy, who is NatureHood program manager with Nature Canada, encourages children and youth to get off their screens and spend more time outside and in nature.

“There has been a dramatic decline in kids spending time outside and in nature over the years for a whole bunch of reasons, and screen time is definitely one of the biggest reasons,” she said.

Sturdy said research shows time spent in nature and being active outdoors is beneficial to children’s health and overall well-being, and helps improve their resiliency, academic performance and social skills.

Time in nature can boost children’s mood, and helps them manage stress and anxiety. When children spend time outside in nature, they find opportunities to learn, explore, discover and understand the natural environment.

“These kind of skills help us as we get older and playing outside and in nature can is a confidence booster,” she said.

“It helps kids focus and concentrate and that will help them in the classroom. Playing outside just helps spur kids’ imagination and be more creative.”

– with files from Alana MacLeod