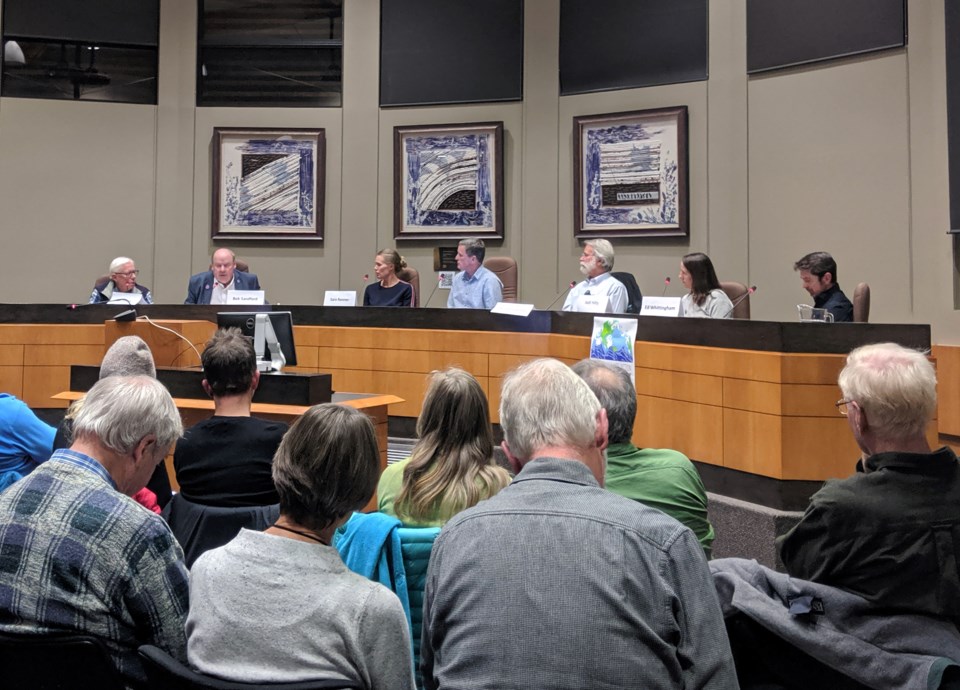 CANMORE – The same day that Canmore town council voted unanimously to declare a state of climate emergency, a panel of local experts and community members were gathered to discuss the issue.

Six panelists, including Mayor John Borrowman and Jodi Hilty from the Yellowstone to Yukon Conservation Initiative, answered climate-based questions Tuesday (Oct. 1) as part of a panel discussion hosted by the Bow Valley Climate Action group at the Civic Centre.

Answering questions such as why climate action is essential and advice for audience members, the panel also included Bill Phipps, a retired minister and former moderator of the United Church of Canada, Sara Renner, former Olympic cross-country skier; Ed Whittingham, an energy policy expert; and Bob Sandford, the EPCOR chair in water and climate security at the United Nations University for Water, Environment and Health.

“Firstly, I want to be clear in acknowledging I have no expertise in this area of study – I’m a potter,” said Borrowman during his opening statement.

“From my own interest, why is climate action essential – I’ve been having a growing concern over the last several years about climate change and its primarily driven by the fact that I’m a father and now a grandfather. I worry what will the world will be like when my children are my age in 30 years, or 55 years from now when my grandchildren are my age – what will they have?”

Each panelist discussed why he or she believes action to mitigate and adapt to climate change is essential, many using facts and experiences, and most indicating that action involves working together.

“Here we are, we’re all normal people from this normal town, who together could do something extraordinary,” said Brenner.

Hilty discussed a time in 2008 when she had a team in the Arctic studying the impacts of climate change on birds in a coastal area where polar bears had never been seen.

“I’m sick at home and I get a call from my staff person who said ‘we don’t know what to do, there’s a polar bear,’ ” she said.

“It’s not like one of those beautiful National Geographic pictures, it’s a horrendous picture of a really scary animal who wants to eat my staff … A week later, we go back. There’s another polar bear. This one has its cub and it’s ransacking our camp.”

Hilty continued, describing the Syrian refugee crisis that started with a drought, driving home the point that it was considered a “small climate change crisis,” yet it had big impacts.

“How do we stop this? We know we’re increasingly seeing young people, old people, everyone, really pushing to make change and yet it’s hard to make it at the top, so here we are, where we can make change bottom up and really make a difference,” she said.

Another question asked panelists to describe what they’ve seen that makes them “take heart” when it comes to climate change.

“I’ve been involved in this struggle for a long time,” said Phipps. “One of the things I take heart in is things have changed a lot in the last 25 years, and I think we’ve got it moving now, and we just have to continue with more and more courage.”

Whittingham said here in Canada, a lot of progress has been made already on the climate issue in just the last four years.

“Our starting point was way behind many countries, but if you look nationally at the Canadian framework … it’s not perfect, but it’s pretty dang good,” he said.

“I also take heart, and perhaps this is a counter-intuitive thing, in the degree of blowback that’s happening right now … people are stepping out. Look at the blowback Greta Thunberg has experienced. A 16-year-old. Who is out of school, who is going to New York. I mean imagine how scared you’d all be at 16 doing what she’s doing.”

Whittingham went on to say typically Thunberg is confronted negatively by politicians who are “usually male, pale and stale."

The panel itself lasted two hours with an opportunity for audience members to ask questions. The Canmore Civic Centre was packed, with community members lining up along the walls, finding any place possible to stand.