A new program and a donation from a community group is giving businesses a leg-up when it comes to Canmore’s new commercial food waste compost program.
Mar 31, 2021 2:00 PM By: Greg Colgan 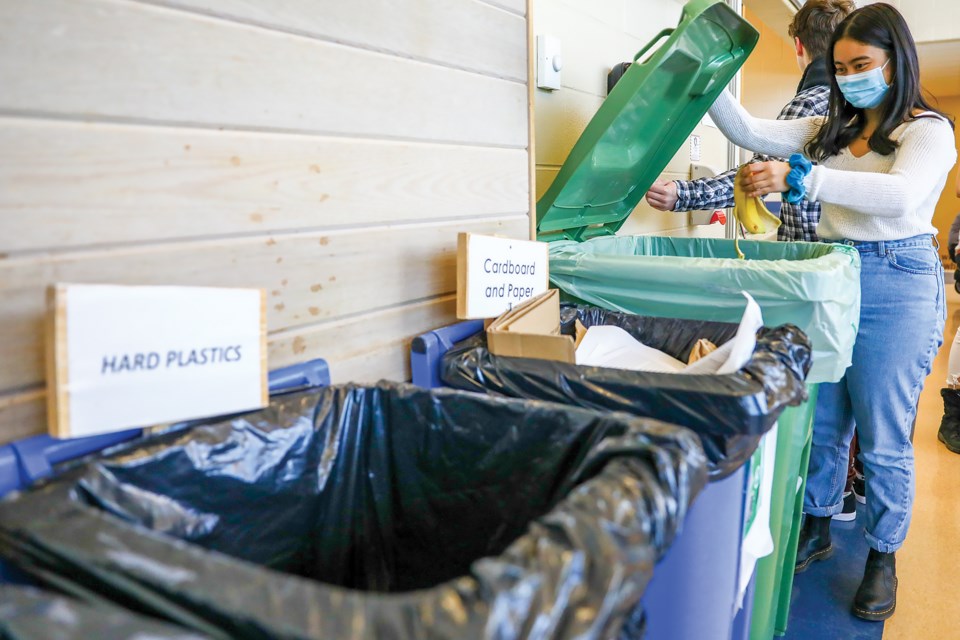 Seth Perez, a Grade 11 student and member of the Our Lady Of The Snows Academy sustainability club, throws a banana peel into the compost bin at OLS during the lunch break on Tuesday (March 30). EVAN BUHLER RMO PHOTO

CANMORE – A new program and a donation from a community group is giving businesses a leg-up when it comes to Canmore’s new commercial food waste compost program.

The Rotary Club of Canmore donated $3,250 to the Town of Canmore that will offset costs for 32 local businesses to begin composting food rather than dumping it in the garbage. The plan is a further piece of the Town’s efforts to lessen waste in the community to help the environment by reduding the amount of organic waste that ends up in the landfill.

“With programs like this, often they seem harder or more difficult than they really are,” said Amy Fournier, Canmore’s energy and climate action coordinator. “It’s new, but with the opportunity to try it out for free, it’s hoped businesses will see it is relatively simple.

“It’s really just putting food in another bin opposed to the garbage and seeing the benefits of how much food waste can be reduced.”

The program will run for a maximum of 10 weeks between April 1 and June 30. It will cover the startup costs of the green bin – either 240-litre or 120-litre – and a once a week pickup.

The subsidy allows commercial operators to try a pilot program and give it a risk-free trial, Fournier said.

Following the 10 weeks, the business would begin paying $10 for the once a week pickup.

Some businesses were involved during a soft launch in January and Fournier said the municipality has received overwhelmingly positive feedback on the appreciation that businesses hear from both staff and customers.

Among the items that can be composted are cooked and raw food, coffee grounds, paper napkins and wooden stir sticks.

The Rotary Club became involved as part of its ongoing efforts to help with sustainable issues that affect the community.

Bob Ellard, the club’s president, said the 102-member group has been educating themselves for the past year and looking for projects to get behind. He said they hope to help with at least one a year.

“We want to do something to advance the environment in the Bow Valley," he said. "It’s a way to step up to cover businesses and give them a leg-up at a time when they need it. It can help both the businesses, but also the community.

“It makes a lot of sense to properly dispose of commercial waste, so we’re hopeful restaurants and hotels will see the opportunity and that it’s good for their business and the community.”

The commercial aspect will add to the Town’s ongoing efforts to increase composting, which has five large waste communal bins for residential use when it began in 2019.

Fournier said the Town will be adding 10 more residential bins, which was made possible after the waste management centre’s expansion was completed.

In a time when businesses such as restaurants have to think over every dollar they spend as they feel the financial crunch of the pandemic, the funding is an avenue to get more commercial places involved.

Fournier said it’s an example of community groups, businesses and the municipality coming together for a greater good.

“We’re really grateful for the Rotary Club," she said. "It’s really encouraging they’re doing this since it’s a win for everyone with it helping the environment, businesses and the Town. I really find the community spirit has a willingness to work together.”

Businesses can email sustainability@canmore.ca or visit canmore.ca/commercialfoodwaste for more information.