"Of course housing issues, labour shortages, all these things are critically important to the Bow Valley and these are issues that will certainly be on my radar screen."
0
Oct 24, 2019 8:54 AM By: Jenna Dulewich 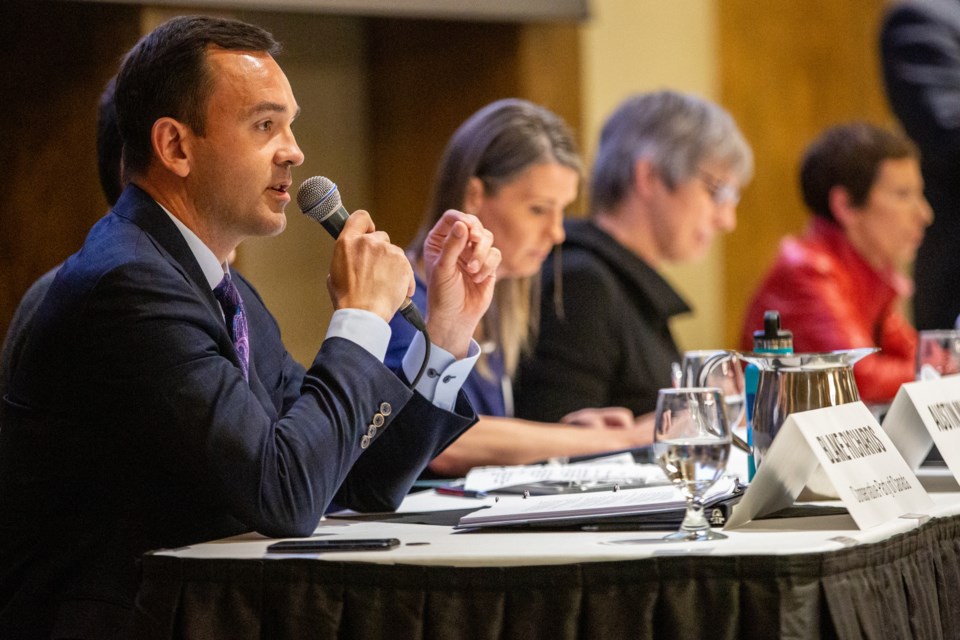 BOW VALLEY – Conservative incumbent Blake Richards said he is humbled to be re-elected as MP in the Banff-Airdrie riding for a fourth consecutive time.

"I can definitely admit to some mixed feelings, no question – you know obviously disappointed to some degree with the national results for sure, but also very grateful because I had almost 55,000 of my fellow citizens put an X beside my name last night and during the course of the election and, you know, that is pretty humbling," Richards said in a phone interview Tuesday (Oct. 22) morning.

Securing his seat in Parliament for the fourth time to represent the Banff-Airdrie riding as part of the Conservative opposition, Richards said Monday night there is a lot of work ahead for him and his party.

"Thank you for all that you have done to make tonight's win possible," he said to supporters who gathered with him in Airdrie. "We have a lot of work ahead of us, but I'm not shy about a little bit of hard work."

Richards was first elected to the House of Commons for the Wild Rose electoral riding in 2008 and again in 2011. Richards came into power a third time in 2015 when the riding was re-named Banff-Airdrie.

"I know that Albertans across this province that they have really spoken out loud and clear that they are looking for some hope and I certainly heard that on the thousands and thousands of doors that we knocked on," Richards said.

While Richards won the diverse southern Alberta riding and the Province followed suit with a sea of Conservative blue ridings, the Liberals won a minority government Monday night with 157 secured seats, while the Conservatives won 121 seats.

Meanwhile the younger generation saw a different future. More than 1.1 million elementary and secondary school students in Canada cast their ballots in the Student Vote with the Liberal Party forming a minority government with 112 seats, the NDP taking the official opposition with 98 seats, Conservatives coming in a close third with 93 seats and the Green Party winning 27 seats. Bloc Quebecois also secured 12 seats in the unofficial junior election.

Banff-Airdrie NDP candidate Anne Wilson said the results were not unexpected in Alberta, but questioned the effectiveness of a minority government.

"I'm not sure what Alberta is going to have to do, and Saskatchewan, to have their issues heard – the Conservatives aren't terribly effective and why would the Liberals care when all the representatives are Conservative," Wilson said the day after the election. "I think there has to be some way to get our issues heard and right now, I'm not sure how that is going to work."

Banff-Airdrie Liberal candidate Gwyneth Midgley said while she was disappointed no Liberal MPs were elected in Alberta, she was happy to see the national results.

"[The Liberals] have a mandate now to move forward and everyone should work together to solve the challenges we face – there is no point burying our heads in the sand."

Ecojustice officials agreed it is time to deliver rapid and meaningful action to fight the climate crisis.

"To date, Canada has missed every greenhouse gas emission target it has ever set. The era of zero accountability must end now. Party leaders must work together to form a government without delay and deliver the rapid, unified and ambitious climate action Canadians voted for," Devon Page, Ecojustice Executive Director said in an emailed statement.

"The action must be grounded in laws that set legally-binding emissions targets and empower Canadians to hold government accountable to our climate commitments so we never miss another target."

When asked about how the re-elected MP would ensure Bow Valley voices and issues were heard in Parliament, Richards responded he would work hard to fight for the affordability and labour shortage issues.

"There is no question we have a very diverse riding – you are absolutely correct, there are different and unique challenges in different parts of the riding and I think to some degree the tourism economy has insulated the Bow Valley from what the rest of Alberta is feeling and experiencing and that is something we are very fortunate to be able to say," Richards said.

Richards is concerned about the sustainability of tourism in the Bow Valley as relations with the Chinese government remains unstable.

"The Chinese market has been a strong [contributor] and as Trudeau has not had a really good relationship with the people in China, I wonder what that impact would be. These are all things I want to be on top of," Richards said.

"Of course housing issues, labour shortages, all these things are critically important to the Bow Valley and these are issues that will certainly be on my radar screen."

Passionate about the issues, the Banff-Airdrie riding saw a 71 per cent voter turnout with 76,595 of 107,281 registered voters showing up to the polls on Monday (Oct. 21).