The months of December through March see some of the highest cougar activity as more elk and deer congregate closer to town.
Jan 13, 2021 11:00 AM By: Cathy Ellis 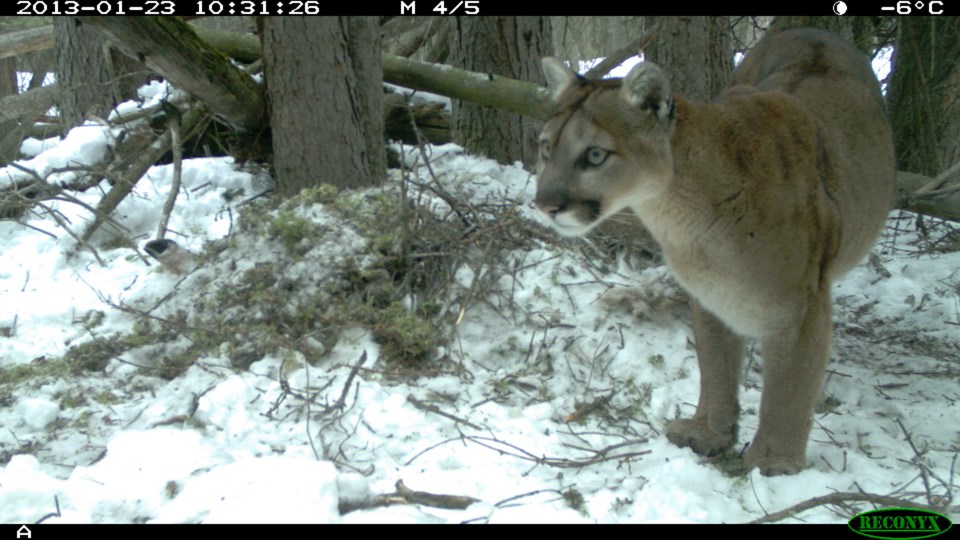 CANMORE – A recent spike in cougar sightings in Canmore is typical for this time of year, as the wild cats come closer to town in search of deer or elk that are seeking safe haven from  predators.

There have been several reports of cougar activity of late, including at Quarry Lake where a photo was taken of a cougar up a tree a couple of weeks ago, and a mother and its kitten at the Canmore Nordic Centre.

Provincial wildlife officials say cougars are active in Canmore year-round, but the winter months from December though March see some of the highest cougar activity because of the concentration of elk and deer closer to town.

“We’ve been getting reports around the valley of cougars being seen; it’s usually on the periphery of town,” said Jay Honeyman, human-wildlife conflict specialist with Alberta Environment and Parks (AEP).

“It is not unusual to have reports from the Nordic Centre,” he added, noting that in one recent incident there, the cougar fled into the forest as soon as it saw people.

According to (AEP), there were 381 cougar occurrences from 2000-18 within the Bow Valley, stretching from the east boundary of Banff National Park to the Kananaskis River – and 284 of these occurred within Canmore.

In a report on human-cougar coexistence in the Bow Valley that provides a summary of occurrences over that 18-year period, 201 occurrences were in residential areas, again mostly in Canmore.

Hotspots of cougar activity include both sides of the valley, including Eagle Terrace and Cougar Creek on the north side and the Peaks of Grassi and Rundleview neighbourhoods on the south side.

A cougar occurrence could be anything from a cougar passing through a residential area, preying on wildlife or feeding on a carcass, to attacks on dogs or getting close to people.

According to the data collected over 18 years, human-cougar occurrences happen throughout the year, peaking in July and August and the main winter months of December through March.

Officials say the high number of cougar occurrences in summer likely coincides with high levels of human activity throughout the valley, and possibly young cougars learning to hunt for themselves.

They say the high activity in winter is likely because cougars venture into developed areas looking for deer or elk, which will often move into town to avoid predation from cougars and wolves during winter.

With the expansion of residential communities in the valley and the reduction of wildlife habitat over the last 20 years, some of the best habitat for some prey species such as deer and elk now exists in and adjacent to developed areas.

Honeyman said there appears, in general, to be more elk and deer congregated in these areas in winter.

“In the summer time, there’s more available for deer and elk to be going elsewhere, but with snow cover and everything else that we see, the concentration is a little more through those winter months,” he said.

“I think that that also is a bit of an attraction for cougars, particularly for those younger cougars that are trying to find their way and figure out how to make a living.”

In addition to ungulates being a food source, officials say there have been cases of residents leaving out salt blocks or vegetables for deer. Feeding birds and rabbits is also known to attract deer into residential areas.

When this happens, Honeyman said residents increase the likelihood of having a cougar visit their properties in search of food; natural prey or otherwise. In these instances, cougars have opportunistically preyed on pets, primarily dogs.

“Then the potential for having cougars in your backyard is also quite high, especially for those subdivisions that are up against the wildlife corridors.”

AEP stresses that management of food sources, including not attracting deer and elk into town in the first place, is key to reducing interactions between people and cougars in the Bow Valley.

“That’s a reminder not to feed any wildlife because without knowing, they could be bringing in predators into town, which cause public safety concerns.”

According to the AEP report, there were several cases of cougars closing distance on people, but in many of these cases, dogs were with the owner and may have been the reason for attracting the cougar’s attention.

Attacks on humans are extremely rare because cougars do not typically see humans as prey.

Alberta’s only fatality occurred in January 2001, when a cougar killed Canmore’s Frances Frost, 30, as she was cross-country skiing near Lake Minnewanka in Banff National Park.

Between 2000-18 near Canmore, there were nine occasions involving cougars approaching, following, or acting in a threatening manner toward a person, but did not result in the cougar chasing or charging the individuals.

There were, however, two instances where cougars did chase or stalk people, according to the report. “One was a hunter while the other was a young boy in town. No contact was made in either instance,” stated the report.

In 2011, two young habituated cougars, which were radio-collared in Banff National Park after they had been seen regularly around the Banff townsite, were destroyed near Bow Valley Provincial Park.

One of these, a young male, was killed after it attacked a young girl near Barrier Lake. The cougar's sibling was also destroyed that summer following several close distance approaches with people in the Canmore area.

To avoid a cougar encounter, people are encouraged to travel in groups, make lots of noise to alert cougars, and leave the area if they see or smell a dead animal that a cougar may be feeding on.

WildSmart’s de Ruyter said there are also other actions people can take to reduce the likelihood of a cougar encounter, including avoiding the use of trails at dawn and dusk and into the night.

“That’s certainly the time of day when cougars are most active and there’s people biking and cross-country skiing and trail running with headlamps at night,” he said.

“Going out during those darkness hours certainly could increase the chance of running into cougars and other wildlife.”

“Their movements are erratic, and so if a cougar happens to be out there, it will catch their eye and could spark their interest,” he said.

“Keeping pets on-leash and keeping them close can help to reduce that risk of potential cougar attacks.”

Bow Valley WildSmart can’t emphasize enough the importance of carrying bear spray rear-round – and for everyone in the group to have their own can.

“Just in case one can doesn’t work right or someone isn’t able to quickly get their bear spray can out, or maybe someone fumbles with it, it’s good if everyone in the group has bear spray,” he said. “You should carry it year-round because even though it is bear spray, it is effective on cougars and wolves and coyotes and elk as well.”

Between 2000-18 in the Bow Valley, 30 cougars were reported or found dead, the majority of which happened on the railway line and roads and highways. Of the 22 deaths where sex was known, 10 were females and 12 were males.

“I think we probably have a fairly healthy cougar population,” Honeyman said.