CANMORE – The Town of Canmore is taking a different approach to managing people who camp overnight in their vehicles on public land with new parking restrictions.
May 9, 2019 12:00 AM By: Jenna Dulewich 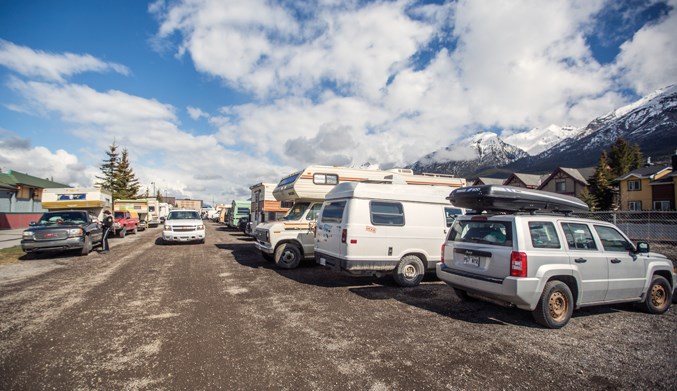 Canmore Bylaw and RCMP officers begin enforcement of parking bylaws in the alleyway that stretches from behind Save-on-foods to Elevation Place in Canmore on Wednesday (May 8). Over 30 illegal campers were located on the stretch on Wed.

CANMORE – The Town of Canmore is taking a different approach to managing people who camp overnight in their vehicles on public land with new parking restrictions.

Council spent an hour Tuesday (May 7) debating three proposed options to manage the number of people parking in the area overnight behind Save-On-Foods. The new rule means those living in their vehicles will have to move every morning for a two-hour window between 7-9 a.m.

While Mayor John Borrowman supported restricting parking during the morning hours to prevent long-term parking or camping, he felt there could be a better solution.

“I couldn’t personally say what I think the solution is,” Borrowman said.

“It’s not black and white and to some extent we are talking about the Canmore homelessness [situation] … if we do come down hard and completely disallow any of the [overnight parking], they will be sleeping in their cars in south Canmore or the Upper Quarry, they will go somewhere else.”

As the number of people sleeping in their vehicles has increased over the past few years council requested a municipal working group to identify and evaluate potential actions to address the issues. In 2018, the Town placed a porta-potty in the area to maintain cleanliness, while the RCMP and Bylaw peace officers monitored the area.

After studying the population, the working group identified four general demographics – those pursuing a life in their van, short-term campers, seasonal workers and supportive housing.

Option one was to maintain last year’s implementation with no additional legal enforcement or legal restrictions.

Option two was to introduce limited enforcement with prohibited parking between
7 a.m. to 9 a.m. daily, which recognizes the affordability challenges within the community and maintains the parking area for its intended purpose.

Option three was to initiate full legal enforcement that would no longer allow overnight parking on the municipal land between Elevation Place and Save-On-Foods.

After some discussion, the first motion put forward was by councillor Vi Sandford, who requested council consider full enforcement.

“If you are working here, you should be making enough money to be living here,” Sandford said. “If you are moving here and hoping for the stars to align and that doesn’t happen, you need to move on … perpetuating this concept of staying here until they align is not getting people where they need to be.”

Borrowman said he was “not happy” with any of the options presented, noting he was “not faulting administration” and he reminded council to recognize the societal issues at play.

“I think we need to do better as a society than say, ‘Get out of town’ … I can’t say how to definitively address homelessness, so I can’t support this motion.”

Other councillors voiced concern about the lack of “compassion” in choosing full enforcement.

“I think if this motion were only to address ‘van life’ or an inexpensive, cheap ways to camp, I could probably wrap my head around this, but if we go with option one or three, we don’t get an opportunity to provide consistence or support – I don’t feel compassion in that motion,” Councillor Joanna McCallum said.

Sandford countered the comments by reminding council social services are a “provincial mandate” and the Town could consider the issue a “provincial responsibility.”

“I don’t think this isn’t about compassion, I think its about managing people in an appropriate way,” Sandford said.

But the historic absence of the provincial government in dealing with Canmore’s housing crisis left Coun. Esmé Comfort concerned about people falling through the gaps.

“With the greatest respect, the Province should do a lot of things and they don’t,” Comfort said.

The motion to go forward with full enforcement was narrowly defeated in a 4-3 vote with Sandford, and Councillors Karen Marra and Jeff Hilstead in support. Mayor Borrowman and Councillors McCallum, Comfort and Rob Seeley were opposed.

The second motion put on the table by the mayor recommended limited enforcement with a parking ban from 7 a.m. to 9 a.m. daily.

“This is not an option some in the community may prefer, but will address some of this issues and concerns,” Borrowman said.

McCallum supported the motion, calling it the “most compassionate” of the three options, while also commending it for the potential to educate the vulnerable population about their rights and options in the housing market.

“I don’t know if that really changes the flavour,” said Sandford, who was the only vote against the motion. “If that place will be a ‘shanty town’ after 10 a.m. everyday, where people have to watch people do their private things in public. You’re putting the public into an uncomfortable interface but for two hours a day it will be sterilized … I cannot support this.”

Borrowman reminded council the last remaining option is to do nothing.

“This gives us time to do that work and find a better option,” he said.

At the end of the discussion, administration also requested up to $25,000 of municipal resources to hire a seasonal social outreach worker to better understand the underlying demographics and identify long-term solutions with the job to run from May to September.

The additional funding came from the General Municipal Operating Reserve, which now has a balance of $2.9 million.

The followup motion was approved by all of council except for Coun. Sandford, who said it was “too much money.”

In her rebuttal, McCallum shared a story of one of her friends who died from carbon monoxide poisoning while living in his vehicle.

“He was older, a smoker and harder to house … we might have been able to hook him up with supports in the community had we had something like this,” McCallum said.

“The point of this exercise is to address and help the people who need help.”