Wildlife officials say cow elk giving birth inside Canmore's town limits is becoming more common, including one incident in May where an elk gave birth in a driveway along Kananaskis Way
Jun 3, 2020 10:00 AM By: Cathy Ellis 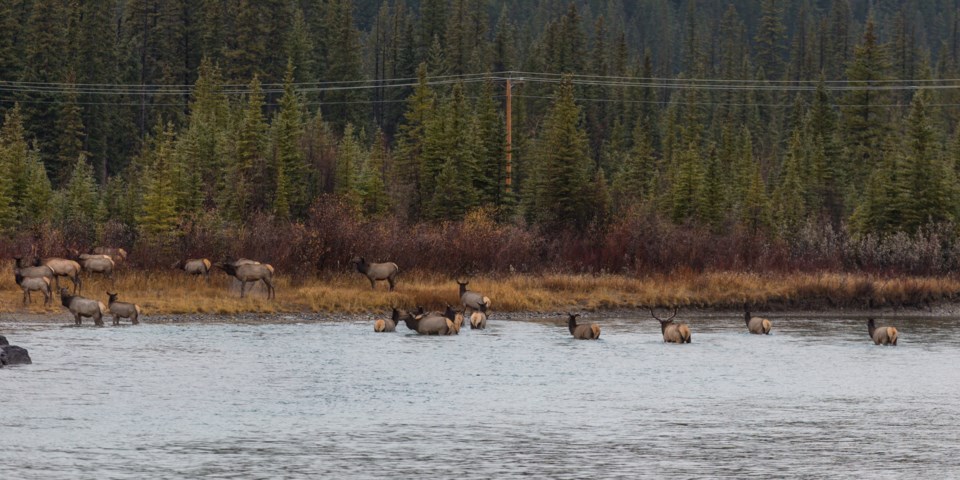 CANMORE – A hiker on a trail in Canmore was attacked and knocked down by a female elk likely protecting her newborn calf, prompting wildlife officials to warn residents and visitors to be on alert.

Elk calving season, which typically runs mid-May to the end of June, is a time of year when mother elk will aggressively protect their newborns, by charging or striking with sharp hooves.

Wildlife officials say there have been several close calls in that area between Little Canyon Road and Silvertip Road, including the May 31 incident in which a man was chased and luckily escaped serious injury. The area was closed for a few days, but the closure was lifted on Wednesday afternoon (June 3).

“It actually made contact and knocked him down, but he wasn’t injured,” said Jay Honeyman, a human-wildlife conflict specialist with Alberta Environment and Parks.

“We’ve had a few cases where people have had to lift their bikes and wave it in the elk’s face. These elk are getting quite close to folks and it’s concerning.”

A newborn calf is defenceless against predators for the first three weeks of its life, so cow elk keep newborns well hidden in bushes and shrubs. The mother elk visits the calf only a few times a day, standing guard not too far away.

In Canmore, however, there are elk calves being born in town.

Honeyman said there was a cow that had a calf in a local backyard, but the pair eventually moved on, and another calf was born on a driveway off Kananaskis Way.

“There was a calf that was actually dropped on somebody’s driveway right in front of their garage,” he said.

“We scooped the calf, dropped her in the woods and the mom reunited with her, but we don’t want the public doing that because it is very dangerous for both elk and people.”

Elk giving birth in town seems to be getting more common with each passing year, according to Honeyman, who noted elk could be seeking a safe haven from predators like wolves.

“It just seems to be either common, or even escalating a bit each year, and I think that’s partly because some of these elk are spending a lot of time in town,” he said.

“They may be becoming ‘town elk,’ whereas 10 years ago we weren’t dealing with that.”

Honeyman said the number of incidents involving elk and people also seems to be escalating.

“We’ve easily had half a dozen issues with elk closing distance, presumably because of calves.”

In addition, a black bear was doing the rounds along the Bow River path on Tuesday (June 2), perhaps looking for elk calves in the area.

“At one point the bear was close to where an elk had been closing distance on some people, and there’s a chance that the black bear is actually looking for elk calves right in the river valley,” said Honeyman.

“We’re getting bear activity on both sides of the valley in and around residential areas, but also down along the river. So the chance of these bears eventually keying in on the elk calves is pretty good.”

The trail closure at Silvertip will be lifted as soon as it safe to do so.

“We don’t really want to close the area if we can help it because it just encourages them to continue calving there,” said Honeyman.

“It becomes a place where they’re not bothered by people, so really it isn’t the long-term solution. But for now, public safety trumps so we close,” he added.

“We don’t have a reasonable alternative; we don’t have the staffing to be chasing these guys around and grabbing calves.”

Over the long term, if serious elk incidents persist, there may be a bigger discussion on elk management.

“The other option is there might be some discussion about lethally removing individual elk that are showing signs of regular aggression in town,” said Honeyman.

“We’re not there yet, but it could be an option down the road.”

Some signs of an agitated elk include staring with flattened ears and raised rump hair, curled lips, grinding teeth and charging and kicking. To avoid an elk encounter, people are advised to stay at least 30 metres away, keeps pets on leash and to carry bear spray.