“CP is unable to consider a proposal to co-locate a passenger rail service on our property unless it can be demonstrated that a segregated passenger operation can be built on adjacent infrastructure without interfering with CP’s freight capacity, or restricting the physical space required to accommodate future growth."
Jul 14, 2020 2:00 PM By: Cathy Ellis 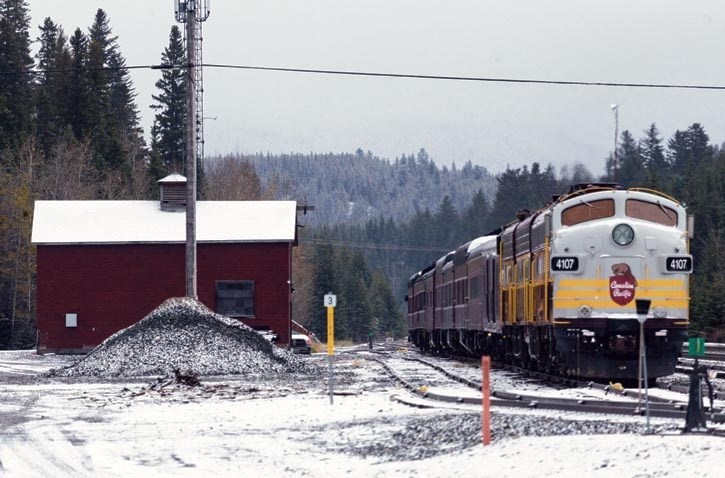 In a June 11 letter to Alberta Transportation Minister Ric McIver and CIB chief financial officer and chief administrative officer Annie Ropar, James Clements, CP’s senior vice-president of strategic planning and technology transportation made it clear a proposed passenger rail line from Calgary to Banff must not interfere with the company's freight operations in order to move forward. RMO FILE PHOTO

BOW VALLEY – Canadian Pacific Railway has some reservations about the return of passenger rail between Calgary and Banff.

The transportation giant indicates it’s willing to cooperate with the consultants working on a feasibility study by Alberta Transportation and Canada Infrastructure Bank (CIB), but any plan to co-locate a passenger rail service on its property can’t hurt its business.

“CP is unable to consider a proposal to co-locate a passenger rail service on our property unless it can be demonstrated that a segregated passenger operation can be built on adjacent infrastructure without interfering with CP’s freight capacity, or restricting the physical space required to accommodate future growth,” said James Clements, CP’s senior vice-president of strategic planning and technology transportation in a June 11 letter to Alberta Transportation Minister Ric McIver and CIB chief financial officer and chief administrative officer Annie Ropar.

On June 9, the provincial government announced it had signed a memorandum of understanding with CIB to look at the feasibility of a new passenger rail service between Calgary and Banff.

Work will include a review of the project’s estimated costs and revenues, exploration of financing options and assessment of environmental, social and economic benefits prior to any potential investment decision by the CIB.

In the 1980s, VIA operated between Calgary and the mountain national park tourist town.

With 4.2 million visitors to Banff National Park each year, the Banff townsite and tourist hotspots such as Lake Louise and Moraine Lake have been experiencing congestion chaos, while neighbouring communities like Canmore continue to get busier as well.

Clements said there are significant safety and liability issues that would need to be addressed before CP could consider a co-location concept.

In addition, he said the western corridor, including what he referred to as the critical segment in its Laggan subdivision between Calgary and Banff, is the busiest portion of CP’s rail network. It handles approximately two-thirds of CP’s total freight volume.

“This corridor is an essential component of Canada’s export driven supply chain, connecting the Canadian economy with the Asia-Pacific region, through the Port of Vancouver,” Clements said.

“CP is not in a position to relinquish any freight capacity on that corridor.”

Clements also expressed concern about a potential link through downtown Calgary to the airport.

If the proposed concept contemplates the use of CP infrastructure, he said there would be significant additional complexity and challenges that would be difficult to overcome.

“For instance, our track network in downtown Calgary is already heavily constrained, and we do not have surplus land available in that area,” Clements said.

“It is therefore difficult to imagine a workable scenario for passenger operation to coexist on our property in the downtown core.”

All that said, Clements said CP will work with the consultants on the feasibility study despite the many significant challenges.

“We will do so in a spirit of collaboration and cooperation so the full magnitude of these challenges can be properly understood and meaningfully assessed,” he said.

A spokesperson for Alberta Transportation did not get back to the Outlook.

However, a spokesperson for CIB said the passenger train project between Calgary International Airport and Banff has the potential to play a key role in Alberta's long-term prosperity, increasing the mobility of Alberta workers and reducing vehicle greenhouse gases along the corridor, noting CP is a central stakeholder in this project.

"The Canada Infrastructure Bank is pleased with the spirit of collaboration and cooperation that is driving CP in the due diligence that we are conducting," said Félix Corriveau, CIB's senior director of communications and media relations in an email. "We welcome their perspective in addressing some of the issues they raise and continue to move this project forward."

The Town of Banff has thrown its support behind the study, however the Town of Canmore, while supporting further analysis of mass transit between Calgary and the Bow Valley, wants to make sure issues of importance to the community are addressed.

Canmore did not sign onto a joint letter by other municipalities earlier this year, but Canmore has a list of points it wants addressed in the study.

They include capital and operating costs to the community, train station locations along the route, land requirements and associated costs, the impact of increased passenger and freight rail traffic on a second line, and the potential for bus service improvements as a bridge to a potential future rail system in order to address current issues and build ridership demand for rail.

“While we see enhanced transit services as essential to the efficient movement of people throughout the Bow Corridor, the proposed rail initiative raises a number of social, economic and environmental impacts that need to be fully understood before the Town could unequivocally support it,” Canmore CAO Lisa de Soto wrote in a recent report to council.