Throwing out the traditional forum debate style, Canmore Youth Adult Network (CYAN) organizers are removing the stage and instead giving the candidates a chance to introduce themselves, talk about their platforms and answer questions on the floor, face-to-face, one-on-one
Sep 29, 2019 2:00 PM By: Jenna Dulewich 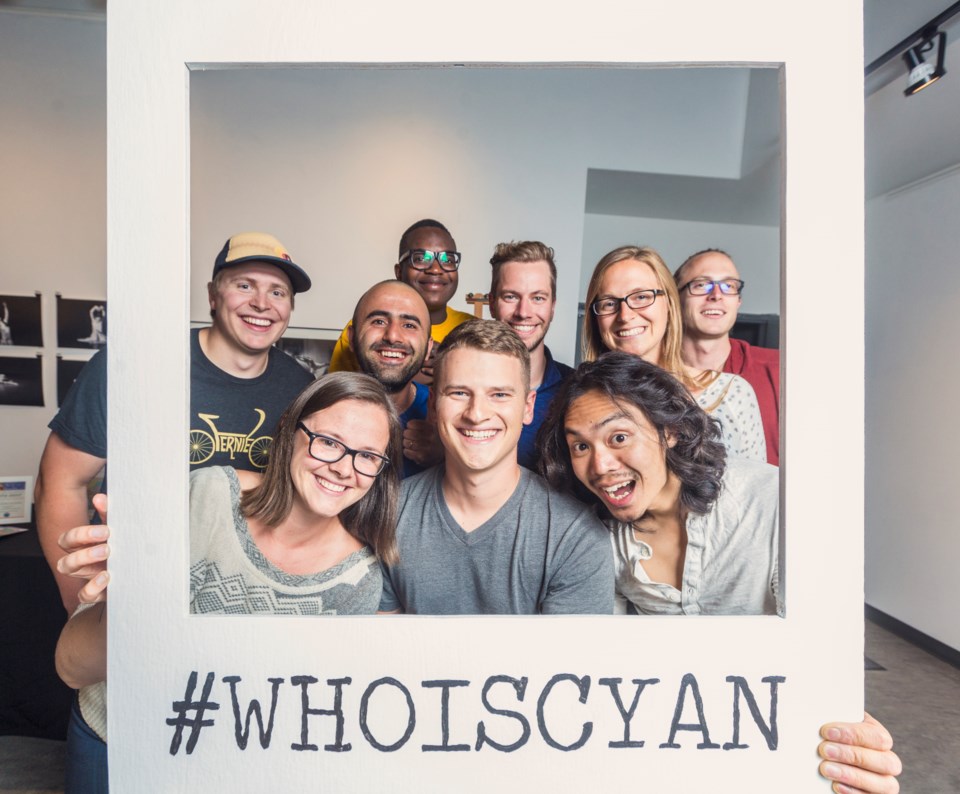 The board of the Canmore Young Adult Network holds up a CYAN photo frame during their What is CYAN night at artsPlace in Canmore earlier this year. The group aims to provide young adults in Canmore a sense of community and a reason to stay in the Bow Valley long term.

BOW VALLEY – Get a chance to have a social with the Banff-Airdrie federal election candidates on Oct. 11 in Canmore.

Throwing out the traditional forum debate style, Canmore Youth Adult Network (CYAN) organizers are removing the stage and instead giving the candidates a chance to introduce themselves, talk about their platforms and answer questions on the floor, face-to-face, one-on-one.

"I think it's really key to learn how to have difficult conversations face-to-face," Tara Koenig, CYAN coordinator and event organizer, said.

This is the third political advocacy event the youth network has hosted in the last several years, inviting and giving candidates from different levels of government a chance to talk to young adults about their policies and campaigns.

The first Move Mountains events was hosted in 2017 for the municipal election, the second one earlier this year for the provincial election and now the third one, next month, for the federal election.

"We wanted to create a social atmosphere rather than a debate or forum. It's a time to just come out and have one-on-one conversations and meet the candidates in a more relaxed and personable way," she said.

Every time a Move Mountains event is hosted, it gets a little bigger with more lessons learned, organizers explained. Stripping the event back down "to its roots," Koenig said this style gives residents a chance to encourage young adults to engage in topics of conversations that individuals might not agree and remove stigma from having difficult conversations.

"We are constantly just trying to make these events whether it is Move Mountains or Beers with Borrowman, anything to do with political advocacy, just make it as approachable and inviting as possible – so even if you don't have all the facts, you can still come out and feel welcome and can be inspired to be that active citizen in our community," Koenig said.

Initiated in 2015, targeting young adults 18 to 35 year old, the youth network was created as a way to connect Bow Valley young adults with each other and local resources in the community. In addition to weekly yoga, monthly pasta nights, board games and pumpkin carving, organizers are also focused on getting young adults involved with their community and learning a little more about politics.

"We wanted to create a culture where if you are passionate about an issue then know that there are organizations and groups to reach out to on a smaller community level [and] we want people to make an educated vote," Koenig said.

The Move Mountains Candidacy Social is kicking off Oct. 11 at the Spring Creek Opera House from 7-10 p.m., for adults only. Canadian citizens and non-citizens are welcome to attend with live local music by the Ramblin' Hey, Ho, Ha's. Early bird tickets are $10, or $15 at the door.

If you want a more classic debate style forum, the Bow Valley Builders and Developers Association (BOWDA) is hosting a Federal Candidates Forum at the Malcolm Hotel in Canmore on Oct. 17 from 7 to 9 p.m.