"These are places from across the province and they do have some conservation value for protecting fish and wildlife and plant species, but a lot of them are even more important for people to be able to use."
Oct 12, 2020 11:25 AM By: Cathy Ellis 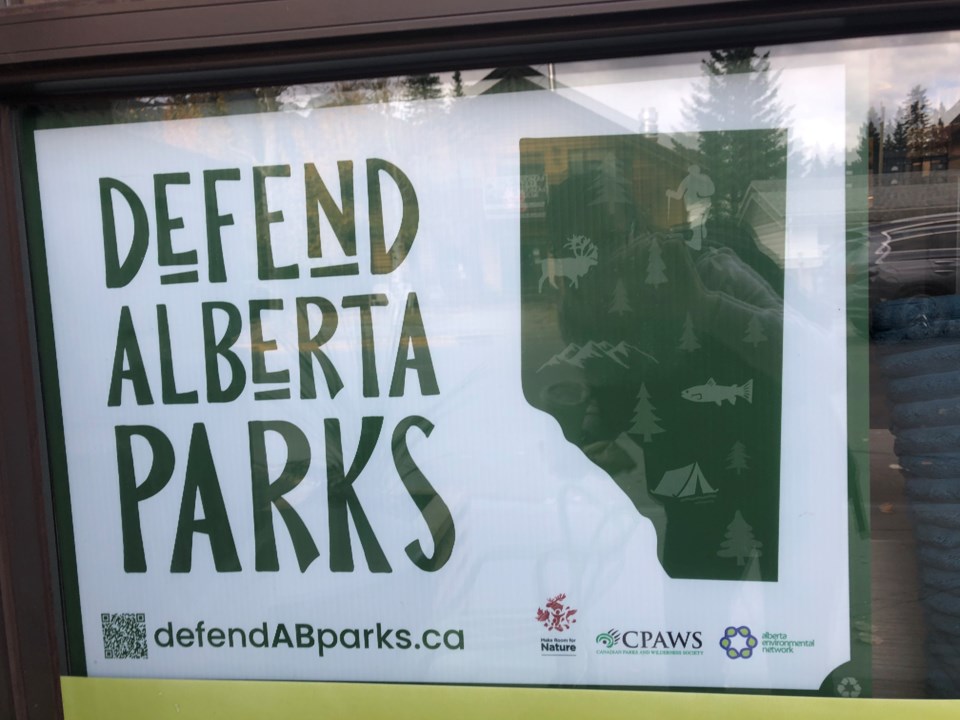 One of the Canadian Parks and Wilderness Society's Defend Alberta Parks signs in the window of a local Canmore business. RMO PHOTO

CANMORE – A national conservation organization is bringing its campaign to save Alberta’s protected areas to Canmore.

The Canadian Parks and Wilderness Society (CPAWS) is extending its Defend Alberta Parks lawn sign campaign to Canmore in its fight against the provincial government’s plan to close  20 parks and remove 164 others from the Alberta Parks system.

People can order signs online at https://defendabparks.ca/lawn-sign/ or pick them up from CPAWS staff and volunteers at SkiUphill-RunUphill at 906 Bow Valley Trail on Monday, Oct. 12.

“We started the campaign about a month ago and we’re getting about 100 requests for lawn signs every single day,” said Katie Morrison, conservation director with southern Alberta chapter of CPAWS.

“We have had so much response in Calgary – there’s thousands of lawn signs out in Calgary –  that we decided to expand to Edmonton, but we’re also getting a lot of requests to bring lawn signs to Canmore.”

Without public consultation, the Alberta government announced in February plans to close 20 parks and remove 164 from the Alberta Parks system, leading to fears this could open the door for uses that are currently not permitted.

The plan could mean the loss of up to 4,493 campsites, which is almost one third of all campsites in the Alberta Park system, including 1,397 in Kananaskis Country. Some sites have already been decommissioned, but most were halted when COVID-19 hit.

Morrison said the changes will effect 74 per cent of all provincial recreation areas.

While this may be a relatively small land base, she said they are some of the most accessible areas for Albertans to experience parks, particularly at a time when people are heading to Alberta’s protected areas in record numbers.

“These are places from across the province and they do have some conservation value for protecting fish and wildlife and plant species, but a lot of them are even more important for people to be able to use,” said Morrison.

“Removing those places could really remove safe, reliable access for a lot of Alberta families. They have facilities and they have infrastructure that allows people to be out there without a big impact in a safe way.”

The owners of SkiUphill-RunUphill – Gavin Harmacy and Joel Desgreniers – have been supporters of the work CPAWS has done for many years, including work on protected areas.

When the two incorporated their business about four years ago, they became a member of One Percent for the Planet, an international organization whose members contribute at least one percent of their annual sales to environmental causes.

“Our cause was Canadian Parks and Wilderness Society in southern Alberta … we see them as doing important work on parks,” said Harmacy, noting he and Desgreniers had many conversations about environmental sustainability in the lead-up to starting the business.

“All of us that are trail running or backcountry skiing, we enjoy our parks, so we should do something to make sure they’re preserved for future generations as well. This is one way to do our part.”

Harmacy said lawn signs can be picked up next Monday between noon and 6 p.m.

“We’re doing it outside to make sure we maintain social and physical distancing,” he said.

Banff-Kananaskis MLA Miranda Rosin could not be reached for comment before publication.