Residents of a Canmore neighbourhood are proposing a direct control district to ensure a 60-metre setback from the Bow River for the two remaining vacant lots is in place should they be developed
Oct 22, 2020 10:00 AM By: Tanya Foubert 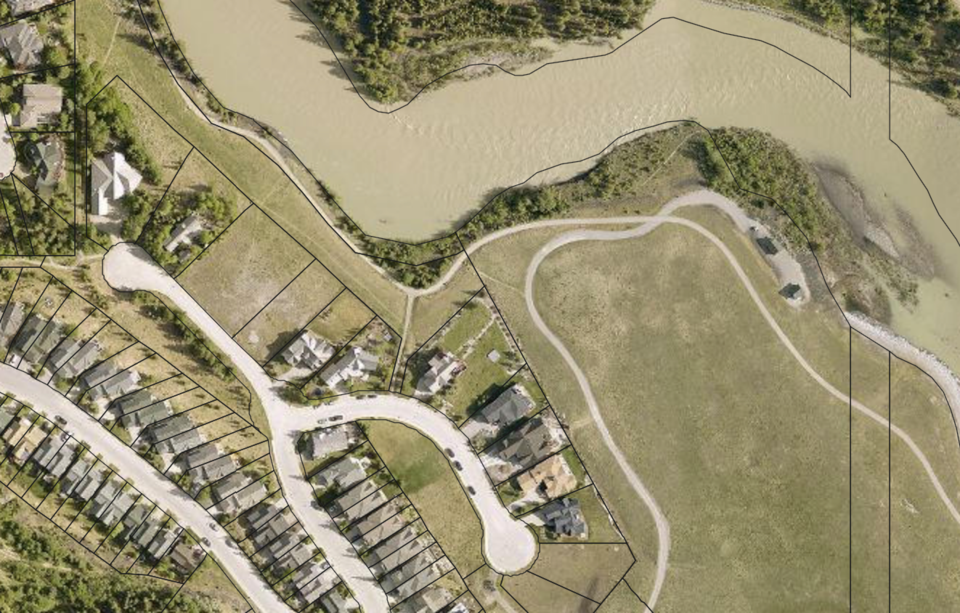 Lots along the Bow River are shown in the Van Horne neighbourhood on the Town of Canmore's online property information viewer. Residents are proposing a direct control district to protect a 60-metre setback from the Bow River for the two remaining vacant lots. TOC IMAGE

CANMORE – Residents of a Canmore neighbourhood have put forward a proposal to create a new direct control district along their street to protect a 60-metre setback from the Bow River.

Town of Canmore senior planner Alaric Fish presented the bylaw to council for first reading earlier this month and a public hearing has been set for Nov. 3.

Fish said the district would encompass seven lots along Van Horne, all but two of which have been developed. The two vacant lots are being considered for development, which is what led neighbours to discover a 60 metre setback applied to their properties cannot technically be applied to the undeveloped ones.

"The key thing is that at the time of development [of the other properties], a 60-metre setback was roughly established for lots from the Bow River based on policy in the [1998] Municipal Development Plan," Fish said.

While the other lots saw the setback applied, as can be shown in records related to subdivision, development and building permits granted over time, language in the current Land Use Bylaw states that lots subdivided after 1998 require the setback.

"Because those lots [in question] were registered in 1996, in other words before 1998, it was felt they were not subject to the 60-metre setback, only the 7.5-metre rear yard setback," Fish said with respect to administration's interpretation of what would be in place should an application for development be submitted. "Neighbours became aware of this and they were concerned that if they had been held to a 60-metre setback, it would be fair and consistent if others were too."

Other changes proposed for the district affect permitted and discretionary uses. Detached dwellings are proposed to be listed as permitted, as opposed to their current discretionary status requiring a development permit. Accessory dwelling units as a requirement is proposed to be removed, however they would still considered permitted.

"The big change is to clearly state the rear-yard setback as 60-metres from the bank of the Bow River," Fish said.

Coun. Joanna McCallum said she is interested to hear what comes up in the public hearing from the applicants and owners of the two vacant lots.

"I am curious as to why there are these changes to permitted and discretionary uses proposed, as this is fresh direction from council in recent years and will let the applicants speak to that at the public hearing," McCallum said.