If you’re a longtime Canmore resident, there is a good chance you have had your hair done at Elli’s Hair West. If not yourself, you definitely know someone who has.
0
Jul 11, 2019 10:00 AM By: Britanny Burr 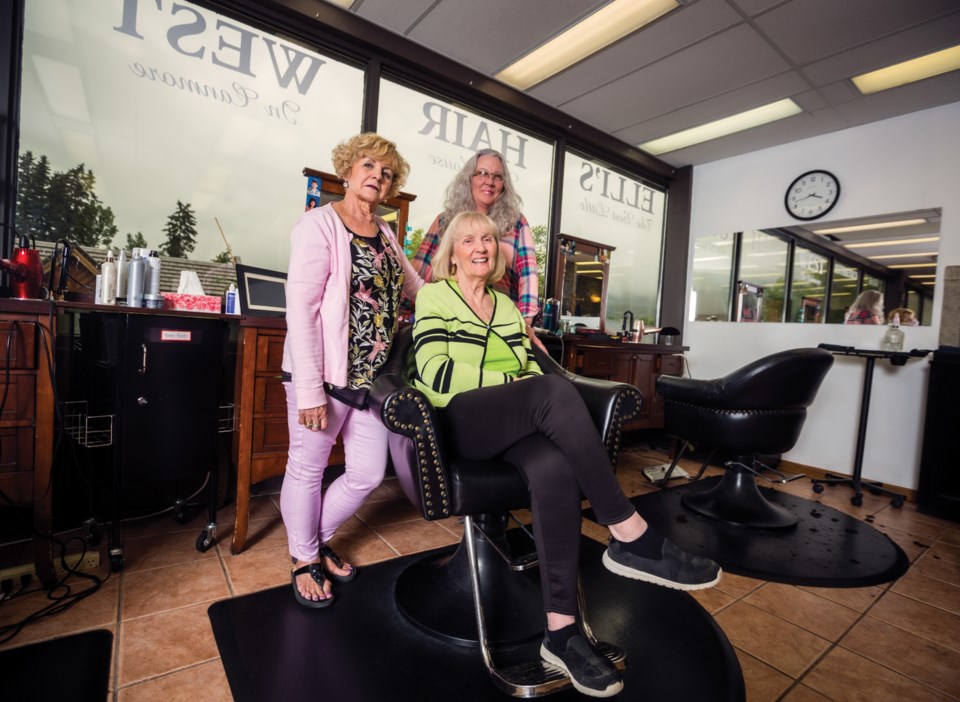 If you’re a longtime Canmore resident, there is a good chance you have had your hair done at Elli’s Hair West. If not yourself, you definitely know someone who has.

The lively local beauty salon is a family-run hot spot that is the longest continually operating business on Main Street, and for good reason. Elli Stabile, along with her daughters Terry Robinson, and Paulette Murphy have all been a big part of the hair salon since it opened in 1975, when the family moved to Canmore.

“It used to be right where Mark makes his sandwiches at Bella Crusta now,” Robinson said. “That’s where it was for many years.

“Next, we moved to where Second Storey Books was, and finally into where we are now above BMO. Paulette’s been working at the shop since 1976.”

Murphy said Stabile trained her husband to cut hair, to help around the salon, but fired him when she took on a job at the family business.

“I started working there when I was 13 and started cutting hair at the age of 17” Robinson explained.

It was 13 years ago that Robinson and Murphy took over the salon’s operations and Stabile retired.

“We are one of the longest running businesses in Canmore,” Robinson said. “Lockwood Auto-body opened six months after us, Marra’s was open at the time, and Keith Frances’ excavating business started right around when we did.”

Robinson, Murphy and their sister Kelly Smith, who unlike her sisters didn't end up working at the salon, have a whole lot of fun and their energy is infectious. For the sisters, it is a legacy from the early days when every occasion was a excuse to get dressed up.

Whether it was Halloween, Easter, Valentine’s Day or Christmas, they dressed up for the entire week and would often make the cover of the local newspaper.

“We even had men’s night on Wednesday nights at the beauty salon,” Murphy said. “It was just for men because they didn’t want to come in with the ladies. Elli and I did it better than the barbers, plus, Elli was always wearing hot pants.

“She loved them, and they loved her. Wednesday nights were a lot of fun.”

In July 1979 when the coalmine closed, the economic viability and future of the community became unclear for local residents.

“When the mine closed, we thought tumbleweeds were going to blow down Main Street,” Robinson said.

Though the economy slowed for some time, business at Stabile’s didn’t suffer.

“We were one of the only established businesses in town, and everyone still needed their hair cut,” Murphy said.

Now, Elli’s is a third generation family-run business, with Stabile’s granddaughter Mackenzie Robinson also now working at the salon. She was inspired by Robinson and Stabile and loves what she does immensely.

The ladies of Elli’s salon remember a town of friends who felt like family, endless love and support from the community, and so much fun in their timeless little salon.

Canmore began as a mining town, but was shaped by each person, family, and business that decided to call that little mining town home.