“He spoke to a number of different projects the government has been putting in place or looking to do so. It was nice for us as a chamber and our partners at BOWDA to be able to facilitate and let some of our members have that conversation in an intimate setting.”
Jul 22, 2021 2:15 PM By: Greg Colgan 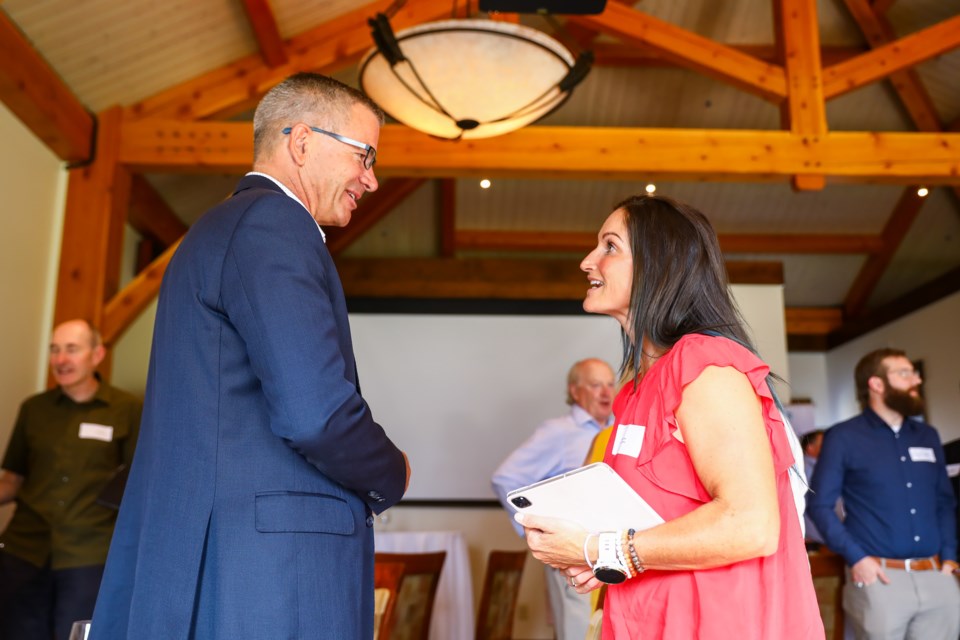 CANMORE – With the province officially reopened and businesses beginning the difficult process of recovering from the devastating impacts of the COVID-19 pandemic, some locals were able to voice their concerns with Alberta’s finance minister.

Travis Toews, the UCP’s finance minister and president of the treasury board, was on hand for a meeting on Friday (July 16) for an event hosted by the Bow Valley Chamber of Commerce (BVCC), the Bow Valley Builders and Developers Association (BOWDA) and Banff-Kananaskis MLA Miranda Rosin.

Toews stressed the importance of having an economy based on diversity is vital in the ongoing economic recovery from COVID-19.

“We really want to position Alberta as a province for economic diversification and we know that means different things in different regions," he said. "As we broadly create the most competitive business environment possible, that gives every sector the opportunity to compete and flourish."

In the Bow Valley, where tourism is a main economic engine, infrastructure has become a pressing topic. Toews said the province has started to put together the 2022 capital plan and is looking at key needs such as potential improvements to the Canmore Nordic Centre.

He noted the province abated the tourism levy between March 2020 through June of this year, and also pointed to the small-medium enterprise relaunch grant that has helped businesses.

“We recognize it won’t cover all the losses, but we really believe that getting businesses on their feet following the pandemic is critically important," he said.

“There’s great value in repositioning the tourism industry here in the province, which has such an impact on the Bow Valley."

Toews, who acts as Alberta’s budget and financial management head, highlighted the province has shifted from a pandemic management model to one of economic recovery.

“We’re recognizing the importance of economic recovery, obviously balanced with environmental responsibility, which absolutely the two half to go hand in hand.”

While the province and the federal government have started the hard and long road of economic recovery, the Alberta government has received some pushback.

Earlier in the month, Toews was criticized after Alberta Health Services asked the United Nurses of Alberta - who represent about 30,000 nurses - to take a three per cent pay cut in their ongoing labour negotiations.

He argued it was an effort to help balance the province’s books, which have been severely impacted during the pandemic. The negotiations are continuing between the two sides.

Toews has said the economic reality of the province will mean tough decisions need to be made.

The NDP health critic David Shepherd was critical, highlighting the burnout rate and impact on employee morale would be worsened by potential wage rollbacks. He added at the press conference the province could have saved money by not funding the government’s war room or spending $1.3 billion on the cancelled Keystone XL pipeline.

The province’s final fiscal report from the 2020-21 budget was released at the end of June. Unsurprisingly, and similar to the rest of the country, it painted a bleak picture as the pandemic put enormous strain on expenditures across the world.

The picture showed a nearly $17 billion deficit and the debt reached $93 billion. While the pandemic was the major player as oil prices were driven down, the province also introduced a new corporate tax cut and lost more than $1 billion on the Keystone XL pipeline.

This year’s budget is forecasting a $20 billion deficit and a $110 billion debt.

NDP finance critic Shannon Phillips called the government’s financial records a “litany of misplaced priorities” at a press conference when the fiscal report was released at the end of June.

The federal government also significantly helped the province’s finances by putting $10.5 billion into the Alberta treasury and roughly $23 billion was sent to Albertans through the Canada Emergency Wage Subsidy and Canada Emergency Response Benefit.

Toews said the Alberta government will focus on three pillars in aiding local and regional economies. The pillars of helping a competitive business environment, making significant investments in strategic infrastructure projects and having specific sector strategies are part of helping the province, Toews said.

Ben Davis, the BVCC president, said the organization is hoping to set up similar events at least once a quarter when Rosin and a cabinet minister can meet with local business owners to hear concerns.

“I think this is the type of event where businesses are struggling and this enables us to say, ‘here’s our MLA, here is a provincial minister, attend this meeting and talk to them and raise your concerns.’”

Davis said about 25 to 30 people attended, which allowed more in-person conversation with Toews and Rosin.

He said the event included topics such as the potential passenger rail between Calgary International Airport and Banff, the COVID-19 impact on businesses as well as climate change concerns.

“He spoke to a number of different projects the government has been putting in place or looking to do so," Davis said. "It was nice for us as a chamber and our partners at BOWDA to be able to facilitate and let some of our members have that conversation in an intimate setting.”

The path ahead for the Bow Valley region will likely be difficult in the years to come. As tourists in the province have returned, the international market will be more slow to bounce back and more dependent on borders reopening and vaccines being delivered.

Toews said the province is continuing to monitor and believes its plans will aid the valley.

“Tourism is so important to this region and a part of the economy that has really taken it on the chin through COVID-19. We’re very aware of it.”