Done by the Job Resource Centre as a result of surveys given to Bow Valley employers on their retention and recruitment strategies, the review found a “picture of improvements businesses made resulting in better staffing levels,” though issues such as staff accommodation or high cost of living still remain a factor.
0
Nov 7, 2019 9:33 AM By: Alana MacLeod 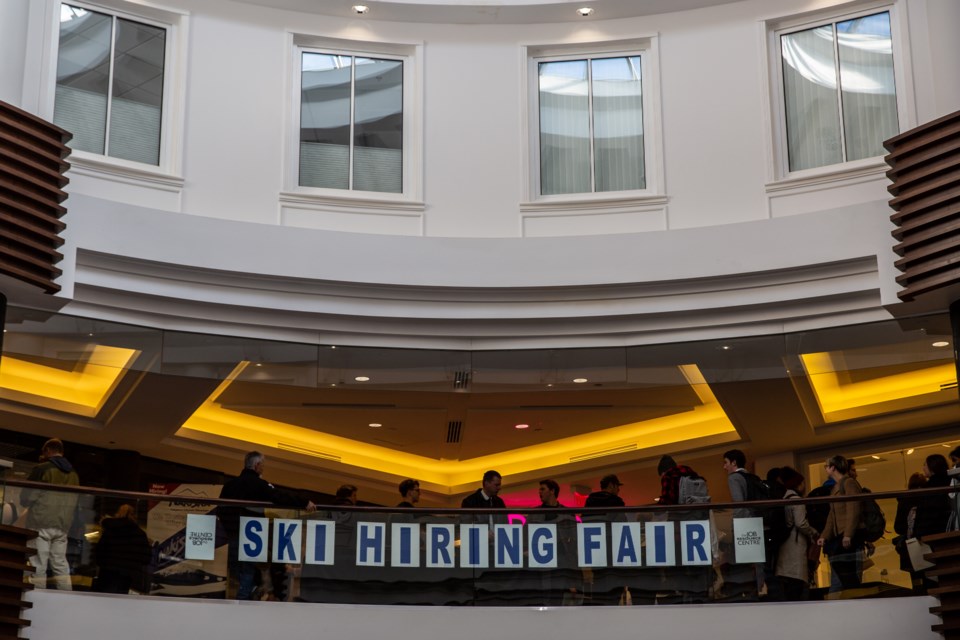 Job seekers crowded into the Cascade Shops for a chance to meet representatives from ski resorts and the hospitality industry for seasonal jobs during the Ski Hiring Fair in Banff at the beginning of October. EVAN BUHLER RMO PHOTO

Done by the Job Resource Centre as a result of surveys given to Bow Valley employers on their retention and recruitment strategies, the review found a “picture of improvements businesses made resulting in better staffing levels,” though issues such as staff accommodation or high cost of living still remain a factor.

“Of course, we have all these supporting industries, but the bulk of the jobs are in the hospitality sector – we’re doing very well. We had another summer of no vacancies in the motels and the hotels, so we had jobs for everybody – there was virtually no unemployment.”

According to the review, 31 employers with staffing numbers anywhere from five people to 1,050 people indicated a number of strategies that helped with levels that were previously down in the valley. It also indicates that in early 2019, the Banff region’s unemployment rate was close to five per cent while the rest of the province was sitting at 7 per cent.

“The Banff region’s tourism economy continued to provide jobs while the rest of the province was affected by pipeline uncertainty,” stated the report.

Dufresne added that what Alberta is seeing across the province in terms of employment doesn’t necessarily affect Canmore and Banff.

“In the case of unfortunately what’s happening in Alberta, in our case, Banff-Canmore – if there’s difficult economic times we’ll be the last ones to suffer and the first ones to recover – it’s always like that,”he said.

From hiring as early as January 2019 for the spring/summer seasons, to providing staff accommodation, to attending hiring fairs, the review indicates recruitment strategies for employers proved key. It also indicates the reasons staff return to a job such as positive work environments, health benefits, or bonuses, competitive wages, flexible work schedules and opportunities for growth.

“Despite adopting ‘best practices’ to overcome staffing shortages, the nature of the tourism industry can make it difficult for some employers to offer year-round employment and entice workers to return year after year,” the review said.

The main challenges employers still face when it comes to staff retention aren’t new concerns; lack of staff accommodation, high cost of living here in the valley, and staff leaving mid-season to return home, or to school, to travel, or due to work permits expiring.

Dufresne adds that those who apply earlier tend to do better in terms of finding staff accommodation. On top of this, job orders are said to have increased by 17 per cent in comparison to last year's numbers, with an average wage of $17.78/hour, an increase of four per cent from last year.

“For us, we help employers find staff,”said Dufresne. “We’re happy to hear from our clients – those employers and HR departments when they’re saying we sent them good staff and the staff stayed the whole summer. That’s rewarding for sure.”