“I will support the motion, disappointed that the original vision isn’t being developed this time, but still this is a good opportunity to approve the tennis facilities available for our community."
0
Sep 6, 2019 7:33 AM By: Alana MacLeod 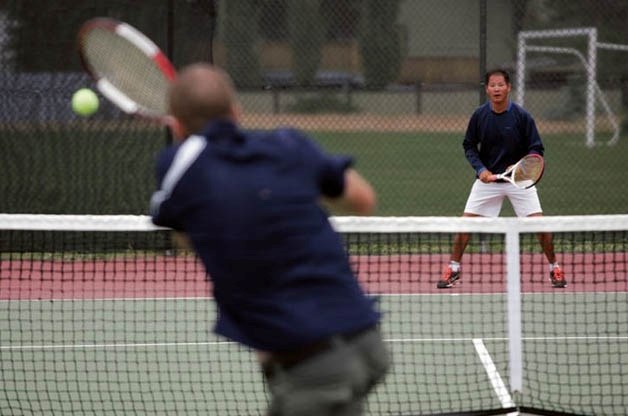 CANMORE – A longstanding plan to refurbish the tennis courts in Lions Park has come back to council with a revised scope and budget plan.

After plans to move forward with the new sports courts were kyboshed in May due to the inability to secure provincial funding, the revised plan will see four courts installed in Canmore, as opposed to the initial five proposed, as well as a revised budget plan.

“Essentially we’re looking to change the scope from five courts, which was originally proposed in the 2019 capital approval, to four courts and to revise the budget from $800,000 to $630,000,” said Andreas Comeau, manager of public works for the Town of Canmore.

Last year, Canmore council approved $400,000 in its 2019-20 budget to pay for half of the capital project, dependent on whether the Canmore Tennis Association was successful in its bid to leverage matching provincial grant funding. The initial plan envisioned adding two additional tennis courts and upgrading all five to regulation size. However, the Community Facility Enhancement Program grant for $362,000 was not approved, leaving the plan in limbo as of May.

“Part of the reasons for that there was a lot of requests for the CFEP funding and the other one was that the project is a seasonal project versus a facility that is all year round,” said Comeau.

The revised plan presented to council Tuesday (Sept. 3) morning, and unanimously supported, hopes to again apply for a CFEP grant, but this time a lower amount of $125,000. It would still require the $413,000 promised from the Town as well, as an additional $67,000 from the municipal reserve funds.

Initially the plan was for the tennis association to pay back the town in membership fees the full $413,000 over 20 years, however the revised plan will instead see $362,000 paid back over the same time period.

“The people who pay who are not part of the membership are using it right now and so they will conceivably continue to use the facility and not pay as they’re doing right now,” said Comeau.

“So that’s why there’s this almost 20 per cent that they were hoping council would be able to pay for because there is, beyond the association, community benefit of people who are using it, but are not members.”

Councillor Esmé Comfort asked if there was another plan should the lower CFEP grant not be approved to which Comeau explained this newest plan, plan B, was as far as they’ve come.

“Ultimately we want the project to go ahead to increase the number of courts but  … one of the scenarios we did look at was taking the existing three and allowing more distance between them so we could have three instead of two, there is some benefit to that,” he said.

“Our fingers are crossed that option B will get approval, we get the $125,000 and the project can begin next year.”

“I will support the motion, disappointed that the original vision isn’t being developed this time, but still this is a good opportunity to approve the tennis facilities available for our community,” he said.

“I think the use of the cash in lieu of municipal reserves [fund] is a good use of those funds, in many ways what its intended to do – provide recreational opportunities for the community.”

Currently the tennis association sends 75 per cent of its revenue to the Town to use the courts and calculated that over a 20-year period it would be equal to repaying the Town for its $400,000 investment.

As part of the larger revitalization of Lions Park, the Town already earmarked $467,000 to replace and relocate the aging playground structure and intended to remove the baseball diamond to make room for the tennis courts. Both projects will take place at the same time.