With climate change at the forefront of many minds entering 2020, one Grade 7 student from Canmore is trying to make a difference – one coffee cup at a time
0
Jan 9, 2020 8:30 AM By: Alana MacLeod 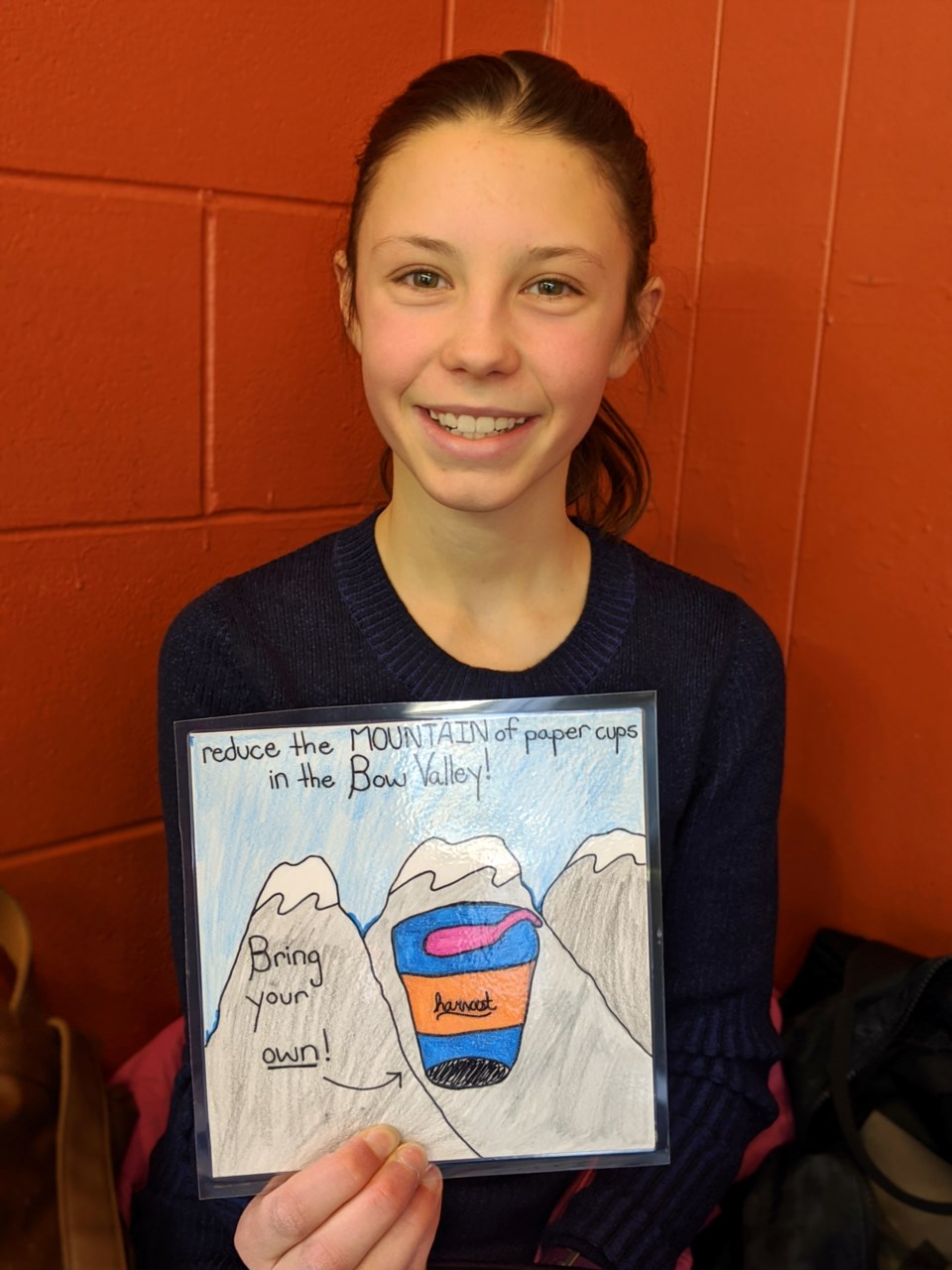 Aislin Simson, Grade 7 at OLS, holds up a homemade sign she and a friend made to encourage Canmore residents to use less paper cups. RMO PHOTO ALANA MACLEOD

CANMORE – With climate change at the forefront of many minds entering 2020, one local Grade 7 student is trying to make a difference – one coffee cup at a time.

Aislin Simson, a student from Our Lady of the Snows Catholic School, is approaching café’s in Canmore in hopes they’ll jump onto an initiative called Re:fill, which prompts café owners to encourage customers to use reusable cups for that caffeine fix.

“We’re trying to promote education with the reduction of coffee cups and we want people to realize that they’re not recyclable,” said Simson.

“I’ve been working with a group called Refill and we’ve been talking to café owners. I’ve made some signs as gentle reminders to bring your own coffee cup. They say things like ‘reduce the mountain of cups.’ ”

The group itself consists of eight members so far; MJ Hammond, Genevieve Wright, Liz Oscroft, Meghan Keenan, Karen Antrobus, Pam Roberts, Jodi Conuel, Heather Johnson and Joanna McCallum. Simson said she chose cups as her target initiative because she’s noticed over the years that individuals either discard their paper cups on the side of the road, or throw them into the recycling. Traditional paper cups used in coffee shops aren’t actually recyclable items due to the wax lining on the inside of the cup, and Simson is hoping to educate Canmorites of this fact.

“I know that if it’s not sorted properly, it can ruin the whole load and everything has to go to the landfill. I figured that it would be really nice to get everybody on reusable cups rather than always using paper cups.”

Simson isn’t alone. Joanna McCallum, local councillor for the Town of Canmore, has been helping her along the way.

“When Aislin came to see me, we met at Beamer's downtown and we sat there watching people come up, and they paid, and they weren’t being offered an alternative,” said McCallum.

“If they were a tourist, they would never have known there was a porcelain cup, and so like sheep, they were taking what they were given, filling it up with their drug of choice – yay coffee – half of them would sit down, complete their coffee and then it would end up in the garbage.”

McCallum said Simson is hoping to challenge Canmorites to be more mindful of their paper cup use in 2020.

“The future is friendly, there are compostable cups out there, but in this community in particular, we need to wait for commercial composting to start because there is product out there that coffee shops can purchase, but to dial it back, we’re going back to that first R – reduce, or refuse – that opportunity you have as a consumer to just say no.

"I think Aislin would like to challenge all of Canmore to see how many coffee cups they go through in 2020,” she said.

Simson said cafés that have jumped on board with reducing waste are offering discounts off a cup of coffee ranging from 25 to 50 cents. So far, Beamer's, Bagel and Co., Communitea, and Eclipse have signed onto the initiative.

For more information, you can visit the Re:fill Instagram page (@refill_yourcup) or visit one of the aforementioned coffee shops.