A 275-kg male grizzly bear was struck on killed on the Trans-Canada Highway near Jumpingpound last week – the third male grizzly to die in that area over the past five years (FILE PHOTO)
0
Sep 4, 2019 3:01 PM By: Cathy Ellis 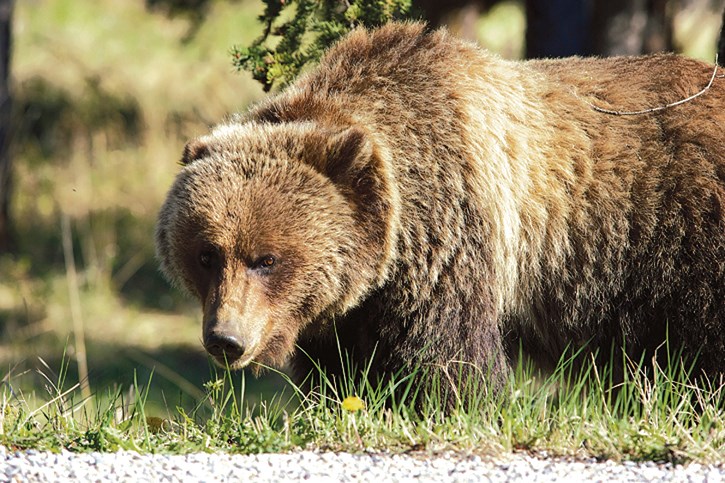 Between 2008 and 2017, 207 grizzly bears died at the hands of humans in the province of Alberta. That does not include bear 148, pictured, which was relocated from Canmore in 2017 and soon after shot by a hunter in B.C. after she travelled into the neighbouring province. RMO FILE PHOTO

CANMORE – A large male grizzly bear was struck and killed on the Trans-Canada Highway on provincial lands last week.

Provincial wildlife officials say a large 275-kg male grizzly was reported dead in the highway ditch on Wednesday evening (Aug. 28) near Jumpingpound Creek – the third large male grizzly to be killed in that area in the past five years.

“The volume of traffic these days on the Trans-Canada is quite heavy, even during the week and in the evenings,” he added.

“It’s really challenging for bears to cross that highway without having some kind of an incident. I guess it’s not a surprise that we’re having these incidents with all the traffic.”

Historically, Alberta is estimated to have had between 6,000 and 9,000 grizzly bears. Grizzlies once ranged across the whole of Alberta, across Saskatchewan and into Manitoba.

When extensive DNA research determined Alberta’s population had dipped to about 700 individuals, the grizzly bear was declared a threatened species in Alberta in 2010. The count is being updated.

Most grizzly bear deaths are caused by humans, including poaching, being mistaken for a black bear during the black bear hunting season, self-defense and accidents such as being struck on roads.

The most up-to-date figures provided the Alberta government show that 207 grizzly bears died at the hands of humans between 2008 and 2017. The most human caused deaths for any one year was recorded in 2016, at 29.

In those years, more than half of the human-caused grizzly bear deaths were due to poaching and accidental deaths on roads and railway. There have been 57 known poaching cases and 63 accidental in the past 10 years.

The Alberta Wilderness Association has concerns about the ongoing high numbers of human-caused grizzly bear deaths.

“Human-caused mortality continues to be a problem,” said Joanna Skrajny, a conservation specialist with AWA.

“Human contact and human incursion into grizzly bear wildlife habitat is the main reason why they are dying.”

Skrajny said the fact that three large make grizzlies have died in that area of the Trans-Canada Highway in the last few years suggests an obvious start is a study to determine if a crossing structure may be warranted.

“In situations where we keep coming into contact with grizzlies and they keep dying, we have to reassess what we’re doing,” she said.

AWA is waiting on an update of the status of the grizzly bear population in Alberta, as well as updated grizzly bear mortality numbers for 2018 and 2019.

Skrajny said high numbers of human-caused mortality could mean it’s hard for a grizzly bear population to regulate itself.

“It means we’re not doing a good job of keeping their habitat safe,” she said.

“Even if grizzly bears are coming in from B.C. where some of the numbers are higher, they’re coming here to die in the end and that means we’re not doing our job properly.”

In addition to bears dying on provincial lands, two grizzly bears have died in Banff National Park this summer.

A male grizzly was struck and killed by a semi-trailer on Highway 93 South just after midnight on June 4, about one kilometre south of the Trans-Canada Highway heading up the hill towards Storm Mountain.

On June 22, Parks Canada was forced to kill an injured and emaciated young female grizzly bear. It’s believed a vehicle struck the bear on the highway 10 days earlier. The yearling, its sibling and mother were on the wrong side of the fence meant to keep wildlife off the highway.

Meanwhile, Honeyman said six black bears have been killed on the roads in this area of the province this summer – four on the Trans-Canada Highway, one on the 1A and one of Highway 40.

“We’ve also had a couple of confirmed strikes where we don’t know if the bear survived or not,” he said.