Each year, those who worked for the mines, and their families, gather for the Miners' Day parade and reunion to celebrate Canmore's mining heritage and recognize that miners didn’t just dig coal – they built communities
0
Jul 11, 2019 8:00 AM By: Tanya Foubert 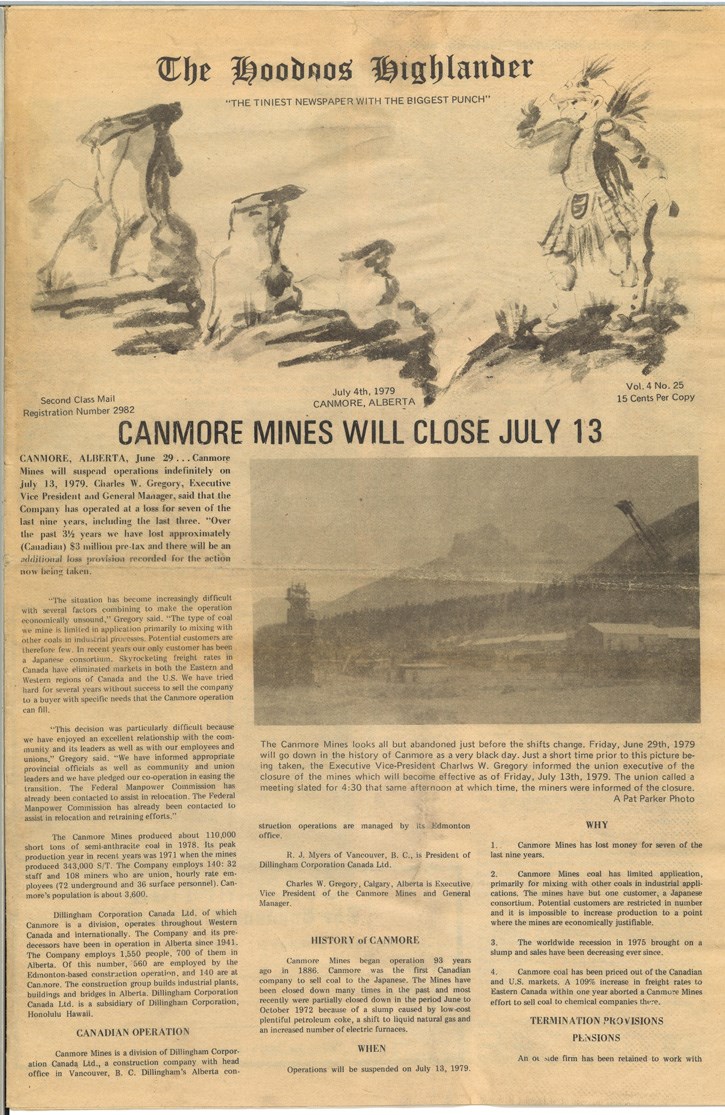 The front page of the Hoodoos Highlander, the newspaper in Canmore in 1979, from the week the coal mines closed. CANMORE MUSEUM AND GEOSCIENCE CENTRE PHOTO

CANMORE – On July 13, 1979 the coal mines in Canmore that had been operational for almost a century officially closed.

Known as Black Friday, the day marked a monumental change for the community from an era where resource extraction drove the local economy, to one where tourism and development would become the dominant forces of change in the valley.

Each year, those who worked for the mines, and their families, gather for a reunion to celebrate that mining heritage and recognize that miners didn’t just dig coal – they built communities.

This Friday and Saturday (July 12-13), a reunion and annual Miners’ Day Parade will be held to mark the 40 years that have passed since the day the mines closed for good.

Organizers each year mark the anniversary with a Friday night get together, followed by a small parade down Main Street and a picnic on Saturday. The event sets out to remember and show appreciation to the generations of miners and their families who shaped Canmore into what it is today.

Celebrations begin Friday at the Canmore Legion at 7 p.m. On Saturday, the parade begins at noon from the Northwest Mounted Police Barracks to the Civic Centre. The names of mining families are proudly on display, as the parade makes its way through the centre of town.

Afterwards, the Canmore Hospital Ladies Auxiliary will be at the Civic Centre with pulled-pork-on-a-bun fundraiser. A private barbecue for families is held afterwards at the Canmore Golf and Curling Club.

The Canmore Museum and Geoscience Centre will be open throughout the day and entry for miners and their families is free.

The museum is also hoping miners and their families will share their stories and experiences living in Canmore while the coal mines were open as part of an oral history project.

Museum staff will be available to record those stories throughout the day.

The Rocky Mountain Outlook and the Canmore Museum also partnered to share stories from Canmore’s mining past featuring residents still in the valley. The project included support from the Biosphere Institute of the Bow Valley’s Bruce Gleig and local writers Britanny Burr and Rob Alexander.