The building, called Moose Meadows and proposed by Basecamp Resorts and Moose Realty owner, Sky McLean, was presented to the Canmore Planning Commission (CPC) on Jan. 29, and will be beside Cam Clark Ford, classified as a mixed-use light industrial building.
0
Feb 21, 2020 12:00 PM By: Alana MacLeod 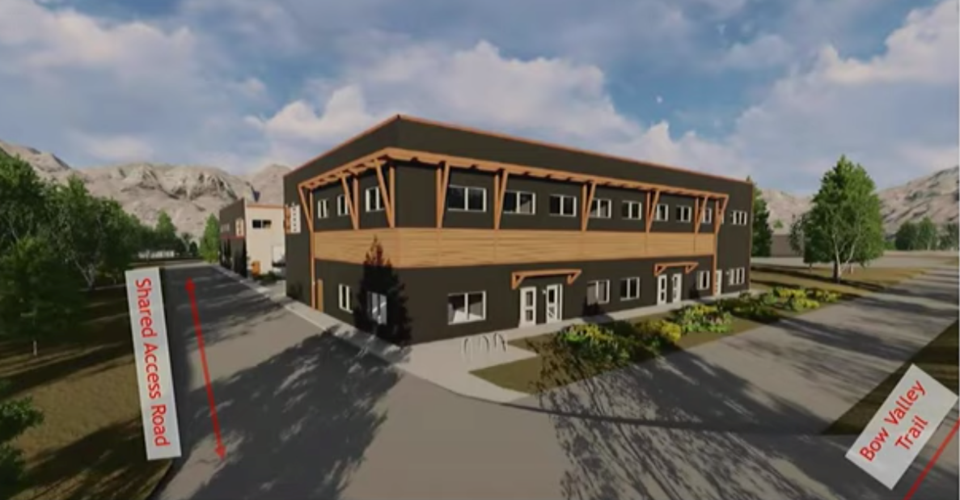 A rendering of the building.

CANMORE – A mixed-use building that includes a laundromat and a light manufacturing operation has officially received the go ahead from Canmore’s planning commission.

The building, which was proposed by Basecamp Resorts and Moose Realty owner, Sky McLean, was presented to the Canmore Planning Commission (CPC) on Jan. 29. To be called Moose Meadows, it will be located beside Cam Clark Ford.

“This is an exciting project because there have been no new industrial buildings built in Canmore in 15 years,” said Alaric Fish, the Town's senior planner.

“Industrial buildings provide an important tax base and service to serve the local community, and so this kind of development supports the diversification of the economy.”

In addition to a light manufacturing operation and a laundromat, the building would also host a construction trade shop, office spaces and retail uses, among other undecided uses.

“The building is fairly simple in its design, in terms of it's got a flat roof, it makes for a very efficient building environmentally to not have a lot of articulation or additional deviation in the shape, so there’s some benefit that comes from that,” he said.

“But with the ceiling height on the first floor, and the design approach... which is 10-and-a-half metres. The bylaw requires a maximum eave line height of eight metres so it’s possible to put some kind of roof structure that would come down.”

Fish said while it’s a fairly significant variance, administration supports it given that it is not significantly taller than the building it's beside.

Recommended conditions of the site include overland drainage, which Fish said would have to be confirmed as adequate as the current proposed solution is to pipe that water. In addition to this, Fish said there’s minor landscaping issues, an agreement that must be made with the landowner beside the proposed site so that an access roadway can be put in, and a few minor engineering issues that need to be fixed.

CPC member Florian Jungen said he has issues with the architectural integrity.

“I guess my comment about the proposal is architecturally speaking ... Overall, my impression of the building with the lack of articulation, it looks like something that would be appropriate in an industrial park,” he said.

“The thing is this is the first, this is the only business industrial precinct in Canmore … we don’t have anything to compare it to architecturally. I do have some concerns it’s setting the bar fairly low architecturally speaking for the district.”

Councillor and CPC board member Joanna McCallum asked about employee housing, which Fish said would potentially be a use under the new land use bylaw. The bylaw, however, doesn’t take effect until April 1, therefore employee housing was not built into the current plan.

“Understanding that this would not happen or may not happen … if the applicant were looking to put employee housing within the building, would there be any additional requirements for parking or is the parking still sufficient?” asked McCallum.

Fish said it would fall under the new bylaw so would require a new calculation when that time comes.

“If it resulted in an increase in parking requirement on the site, either we would not approve it or we would have to approve it with a variance,” he said.

Applicant Sky McLean said the building is a result of “outgrowing” current offices.

“We’re like ‘there’s nowhere for us to go as a local business. I wonder if we’re in this alone,’” McLean said to the board.

“We started chatting to local businesses prior to acquiring the land and there were so many people in our small business community that had nowhere to go, so I thought ‘great, let’s try to find a piece of land and we can build our office, and what we need for our business, but also do that for other members of the community as well'.”

McLean said she’s had “so much interest,” and that she’s sad the commission “doesn’t like how it looks.”

After McLean finished speaking, CPC members went in camera. In the end, the commission approved the building.