CANMORE – The much-anticipated moment has arrived and now Canmorites have a bear-safe place to empty their new compost bins.

The composting pilot project, which has put eight-litre kitchen bins in the hands of roughly 2,000 residents so far, now has five large-scale neighbourhood bins to collect the compostable items.

“As of today Canmore’s residential food waste is no longer garbage,” Major John Borrowman announced Tuesday (Sept. 3) morning to cheers from the crowd gathered at town hall to celebrate the launch of the program.

“This collecting and composting of food waste is a key part of achieving our goal of reducing greenhouse gas emissions by 30 per cent by 2030, as well as meeting our waste diversion targets.” 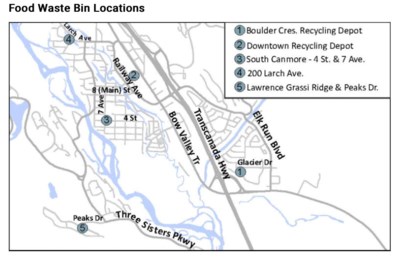 A map from the Town of Canmore website showing bin placement.
The five bins will be located at the Boulder Cres. Recycling depot, the downtown-recycling depot, the corner of Fourth Street and Seventh Avenue, 200 Larch Ave. and Lawrence Grassi Ridge and Peaks Drive and are complete with a bear-safe lid much like the current garbage and recycling bins.

“We’ve had overwhelmingly positive support from the community in regards to this program and that’s great,” said Borrowman.

“As you’re probably all aware there’s five bins in this pilot and of course we’ll be learning as we start rolling out the program. This will help inform future potential expansion … The expectation is next year we’ll move it out into the commercial sector where the real heavy lifting will happen – the restaurants, and hotels and other commercial operations.”

The pilot project wasn’t meant to launch for another year but due to mounting pressures and community interest, Canmore council decided in April to use $51,000 from the waste-operating budget to cover the cost of sending organic materials to Banff for a year. The Town of Canmore will first ship its compost 24 km west, then will join the Town of Banff in sending the compiled waste to a composting facility in Strathmore, Alta.

Diana MacGibbon from Canmore Organics Recycling (CORE) said the group has been advocating to council for an organic waste system since the last election and they’re happy with Tuesday mornings unveiling.

“We met with pretty much all members of council and candidates in the last election to advocate that Canmore start up a organics-recycling program and they did,” said MacGibbon.

“It’s so exciting to see the Town get on board, we’ve met a ton of people, people coming to pick up their buckets and everybody was really thrilled to see it moving forward, as are we.”

The large neighbourhood bins themselves have been adorned with a colourful piece of artwork done by Pascale Ouellet, who won in a competition for the job. Using food waste from what she ate in one day, Ouellet created a unique wrap portraying the beautiful landscape surrounding Canmore. 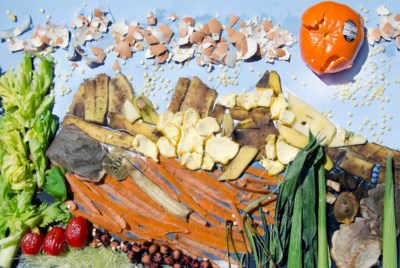 Three Sisters by Pascale Ouelett will now adorn a side of the bins.
“The four sides have a different peak,” she told the crowd at the unveiling. “I created the design with compostable items … I really wanted to do stuff like shavings peels and all the stuff that we would normally throw in the garbage … These are all [the things] I ate in one day.”
An estimated 500 tonnes of organic waste from residential homes will be diverted from landfills per year. The action plan target is to reduce the .60 tonnes of garbage per person per year Canmore residents send to the landfill to .45 tonnes by next year (2020).

Canmorites are able to take their full eight-litre bins to one of five locations to dump them. If you don’t have a bin already, Robyn Dinnadge, manager of communications for the Town of Canmore, said in an email all 2,000 approved kitchen bins have already been picked up.

“All 2,000 of the bins have been picked up by residents,” she wrote. “With council’s approval today, we are ordering another 2,000 that should be here by mid-October.”

In the meantime, residents who don’t yet have the bin are encouraged to use a pail or bin with a lid for their food waste materials. For more information on what can go into the bins, visit www.canmore.ca.