The Canmore theatre collective had the unique challenge of filming performances remotely in accordance to provincial health measures.
Apr 8, 2021 4:00 PM By: Gabe Lunn 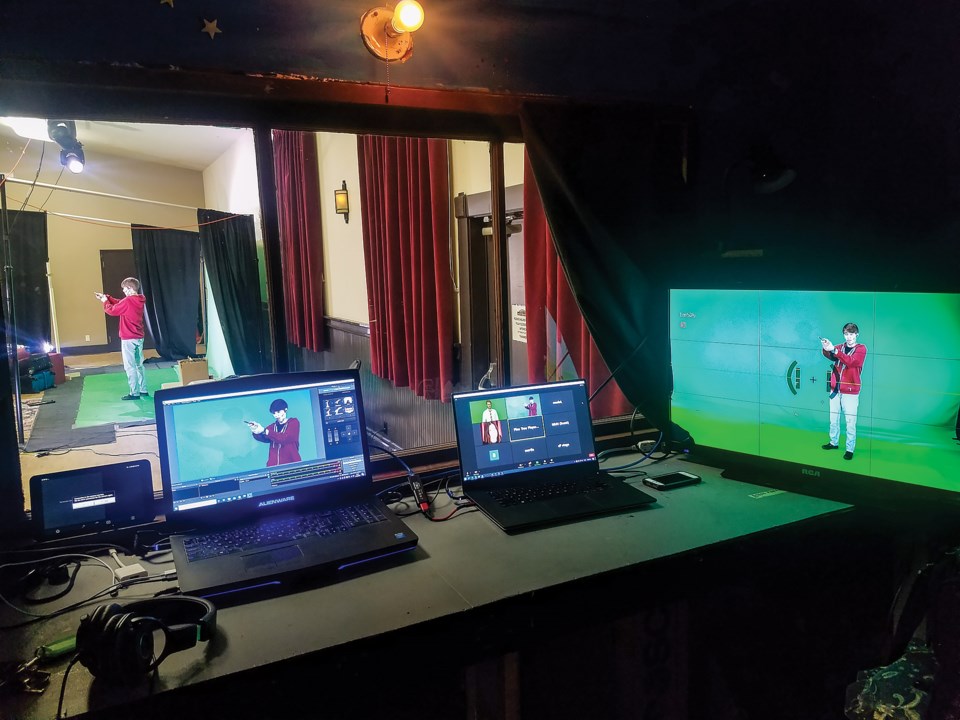 Scout Hogg on set of Pine Tree Player's The Curious Incident of the Dog in the Night-Time. TOOMAS MEEMA PHOTO

CANMORE – This April, the curtain will draw from the comfort of viewers' homes for the online stream of Pine Tree Players (PTP) latest production of The Curious Incident of the Dog in the Night-Time.

The Canmore theatre collective had the unique challenge of filming performances remotely in accordance to provincial health measures. Cast and production members couldn’t be in shared spaces and had to coordinate filming with a green screen and remote cameras.

“We have people from all over Canada working with us on the project. It's been really unique. I don't think we would have had the opportunity to have such a far branch to production otherwise if it wasn't for COVID,” said director Candise McMullin.

Based on the 2003 mystery novel by U.K. writer Mark Haddon, The Curious Incident of the Dog in the Night-Time tells the story of Christopher Boone, a mathematically gifted 15-year-old who struggles to find social acceptance and understand people.

“When he discovers his neighbour’s dog dead in the garden, he is determined to find the killer. But his detective work, forbidden by his father, takes him on a frightening journey that upturns his world,” says PTP’s website description of the production.

Haddon’s novel was the winner of more than 17 literary awards, has been translated into 44 languages and sold more than 5.5 million copies worldwide.

The innovative production by PTP combines live-action and animations inspired by pop art and comic strips, directed by McMullin and featuring animations by illustrator Chris Leonard.

Production was meant to begin in April 2020, but was rescheduled due to health restrictions.

“Only one unmasked person could be in the room at the same time [as filming],” said videographer Toomas Meema.

“We had to create two locations and the secondary location needed to have everything remotely controlled, like cameras.”

Improvised studios were assembled at the Canmore Miners’ Union Hall and artsPlace.

“I started wrapping my mind around it. If we're stuck in these boxes, how can we make these boxes look good?” said McMullin.

“Well, what can we do as green screen? Then the comic book idea came to me and to put pop art makeup on my actors ... and suddenly we had a live animation comic book on our hands.

"There are a lot of beautiful animations interspersed in it [such as] little frozen scenes with speech bubbles with the words coming up. It reminds me a lot of the old Marvel comic books.”

Every rehearsal and filming session was conducted through the Zoom live videoconference application.

Not being able to coordinate production in a shared space proved challenging for cast and crew members.

Actors would perform in front of remote cameras against a green screen and had to additionally manage equipment settings such as checking their own sound levels, camera focus, lighting and marking scenes for post-production editing.

“It was different being almost disconnected from the actors in such a way, because normally when you're in the same room, you can feed off each other's energy and know what they need from you as a director and feel when they're in the role,” said McMullin.

“You have to rely a lot on pacing and speech, things that you take for granted in a regular conversation, because I'm working with someone who's on a little tiny screen and I can hardly see their gestures,” said Scout Hogg, who portrays Christopher.

Certain scene shoots had to be planned in sequence well in advance, and naturally, hiccups can occur.

“We definitely had a vision of how we would like it to look, but then a lot of background [animations] depends on the footage you end up with and where the actors are actually standing,” said Leonard.

“We tried to get some stuff done in pre-production, but a lot of it ended up getting scrapped, depending on, ‘Oh, that's not the shot thought we were going to get and it's a very tight timeline.”

The production footage was all shot remotely on multiple cameras in 4K, resulting in very large video files to share without a centralized workspace.

“We were having to meet up and trade hard drives like a backyard school deal,” said Leonard.

Hogg had the unique challenge of portraying a neurodiverse character for the first time, on top of managing his own performance and remote production.

“I’m neurotypical, so it wasn’t a perspective I've ever had to look through,” said Hogg.

“I read the book growing up and I loved it, so I really wanted to jump at the challenge. But I had to really do a lot of research.”

Matteo Esposito, a playwright who is also autistic, approached PTP as a consultant when he learned about their production.

“Being a person with autism is unique. There are certain behaviours that you will see Christopher do that I do such as stimming,” said Esposito in a written statement.

“I encourage you to have an open mind while seeing this show and may Christopher's journey spark something inside.”

Esposito collaborated with Hogg to discuss the unique experiences and behaviours exhibited by neurodiverse individuals.

“We talked a lot about processes like stimming, which is when you do a repeated action over and over and it can be for lots of different reasons, which I was unaware of," said Hogg.

"I became very aware of assumptions and things I take for granted.”

“Even just the fact I can walk into a crowded mall and I can lock out the world and I can shut down noises and focus on one thing; whereas for Matteo, we talked a lot about how too many sounds and lights can be overwhelming because his brain is trying to focus on everything at once.”

“Matteo gave us insight and he opened up with us about different behaviours that we didn't personally experience ourselves,” said McMullin.

McMullin remarked a saying by the neurodiverse community about representation in media: “nothing about us without us”.

“I didn't want to do the production without a [consultant]," she said.

“Luckily I have parents in the community here who have children who are on the spectrum and I was able to talk to them about what it was like to be a parent. They have beautiful and heartbreaking stories to tell.

“I think we all came away from the production having a new respect for people on the spectrum and a new love as well for the way that they see the world around them because they see everything in a really unique way,” said the director.

Closed captioning and video descriptions will be included on the April 22, 23, and 24 streams, thanks to Inside Out Theatre.

“We’re trying to keep that feeling of live theatre. Even though it’s a filmed production, it’s that moment in time and after the six shows it won't be available anymore,” said producer Jen Tweddell.

Auditions will be held April 11, 13, and 15 (all dates and times are subject to change). Rehearsals start May 9 in Canmore.

“We’re hoping those will be in-person auditions with all of the appropriate measures. Our fallback will be zoom auditions,” said Tweddell.

PTP encourages submissions from diverse individuals of all backgrounds. Both speaking roles and non-speaking roles are available and cast members will learn stage combat and/or choreography.

About the Author: Gabe Lunn

Gabe Lunn is a Banff native and reporter based in the Bow Valley. His interests have led him to produce coverage on local politics, environmental issues, arts and culture, among other topics.
Read more