“The province has approved a new flood mitigation project for Canmore that will help ensure public safety and lower the risk of flood damage, like that experienced in 2013."
0
Feb 12, 2020 1:15 PM By: Alana MacLeod 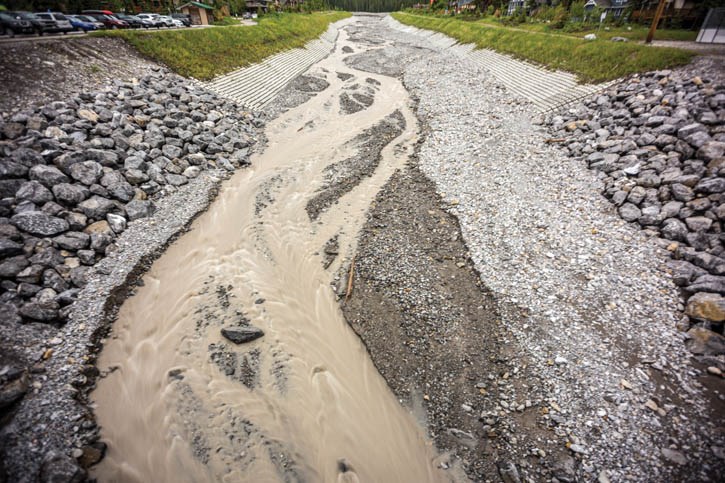 CANMORE – The provincial government has provided its stamp of approval on Canmore’s Cougar Creek debris retention structure – a key approval needed for the project to move forward.

In a press release sent on Wednesday (Feb. 12), the Government of Alberta said it approved the long-term mitigation project for Cougar Creek, a $48 million debris dam, moving closer to final steps in a long process for the Town of Canmore.

“The province has approved a new flood mitigation project for Canmore that will help ensure public safety and lower the risk of flood damage, like that experienced in 2013,” the release said.

“In addition to homes and businesses, the Cougar Creek debris flood retention structure will protect critical infrastructure, including Highways 1 and 1A, the Canadian Pacific Railway main line, a school and the RCMP detachment. Electric transmission lines and a high-pressure natural gas pipeline will also be protected.”

The project comes more than six years after flooding in mountain creeks affected the community of Canmore and after the Natural Resources Conservation Board (NRCB) approved changes surrounding design, reducing cost, and speeding up construction in October 2019. The NRCB originally approved the plan in November 2018.

In a press release, the NRCB announced its official go ahead on Oct. 23, 2019 after the Town of Canmore submitted its revised application at the beginning of September.

“The Natural Resources Conservation Board has found the Town of Canmore’s revised Cougar Creek debris flood retention structure application to be in the public interest,” reads a statement from the regulator.

“The NRCB concluded that the structure will protect public safety, property, and infrastructure and has no unacceptable environmental impacts.”

The changes made to the design by the Town of Canmore were for the access road, spillway and the dam structure itself. During an update to council in January 2019, administration revealed it was recommending making these changes to the original plan because the project otherwise exceeded the budget.

As a result, the NRCB was required to either amend its decision or issue an addendum. The Town’s project manager Felix Camire told council early last year that the new plan could reduce construction time by six to 12 months, as well as be significantly cheaper to build. The NRCB later said that application had been reviewed and it “remains satisfied” with the project.

The provincial approval was one of the final steps the Town required in order to move forward, though the project isn't fully approved just yet.

Three different levels of government will fund the project.

“The $48.8-million project is funded by all three levels of government, including $30.3 million from the province. Provincial funding has been fully allocated for this project and the Town of Canmore is responsible for ongoing maintenance and operating costs, so there are no implications for Budget 2020,” the Alberta Government press release said.

The dam will be a 34-metre high “rock-filled embankment dam,” with the “upstream and downstream faces covered by soil and seeded,” the Town of Canmore’s website explains.

It will also include a 20m wide rock-cut spillway on the east abutment.

An open house will be held on Mar. 4 to discuss design and construction timelines. Visit canmore.ca/projects/cougarcreek for more on the project.

EDITORS NOTE: An earlier version of this story indicated provincial approval was the final step. A spokesperson for the Town of Canmore has indicated this is not the case, but it is a positive step forward in the process.