"[We] can definitely call this a crime spree – it wasn't one shot, we've have an increased, real spike, in bicycle theft over the last month and we can attribute a lot of that to this arrest."
Oct 8, 2019 2:32 PM By: Jenna Dulewich 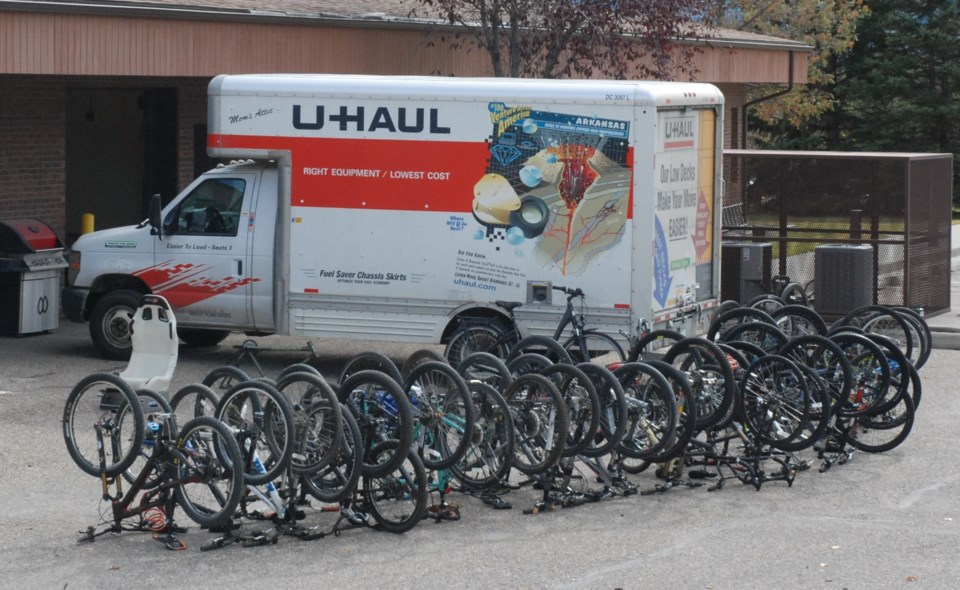 Canmore RCMP, with the assistance of Calgary Police Services, recovered more than 30 stolen bicycles suspected to be from the Canmore area. SUBMITTED

CANMORE – RCMP have recovered more than 30 stolen bicycles after a call from the public about a suspicious vehicle led to a valuable tip about organized crime.

John Gil Cortez, 24, has been charged with 10 criminal offences after 32 bicycles were recovered, 12 from a stolen U-Haul and 20 more from a storage unit in Calgary – all suspected to be from the Canmore area.

"It's obvious this was a planned activity," Sgt. Stan Andronyk with the Canmore RCMP said. "[We] can definitely call this a crime spree – it wasn't one shot, we've have an increased, real spike, in bicycle theft over the last month and we can attribute a lot of that to this arrest."

On Oct. 4, Canmore RCMP responded to a call of a suspicious vehicle in the industrial area on Railway Avenue around 6 p.m. Officers knew the U-Haul truck had been linked to a number of bicycle thefts in the area and believed this was the suspect vehicle, according to RCMP.

They found the vehicle and followed it to the Calgary City limits where the suspect was arrested in a traffic stop with assistance from Calgary Police Service.

Officers found 12 bicycles in the back of the U-Haul, along with several other items that were seized, including power tools, two miniature motorcycles, multiple gift cards, vehicle documents and a variety of break-in instruments, bolt cutters, flashlights, balaclavas and torches.

Further investigation led officers to a storage unit in Calgary where a search warrant was executed and another 20 bicycles were found.

The recovered property is estimated to be more than $100,000, a press release stated.

"It is believed this person was involved in a number of thefts over the past month – there was some fraudulent activity and counterfeit money, where we laid charges," Andronyk said.

"Canmore RCMP are working to return the recovered bicycles to their owners. This is a good time to remind everyone to record serial numbers and distinguishing marks on their property, and to have photographs available in the event their property is stolen and later recovered," Andronyk wrote in the press release.

"This investigation began as a result of a phone call made to police about a suspicious vehicle. Canmore RCMP again want to remind everyone to be vigilant in their neighbourhood."