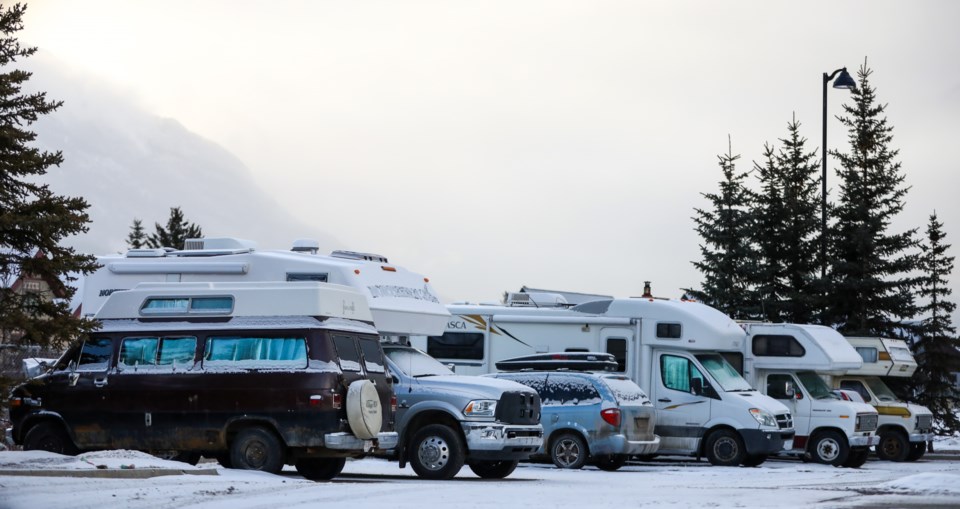 Ten vehicles are parked behind the Save-on-Foods in Canmore in March 2020. EVAN BUHLER RMO FILE PHOTO⁠

CANMORE – The Safe Park program will launch in 2021, but significantly downsized from its original approval due to public health restrictions with the COVID-19 pandemic.

The program is meant to help with the growing number of people who work in the community, but live out of their vehicle largely due to the high cost of rent and shortage of housing.

“We’ve experienced some challenges, as have many other communities like Canmore over the past several summers with the impact of a lot of people wanting to come to Canmore and work for the summer and looking for reasonable and inexpensive accommodations,” Mayor John Borrowman said before council unanimously approved the pilot program.

“This program has evolved from the last couple of years and it may prove to work really well and other similar municipalities may start looking to what we’re doing, or there may be some tweaking that would be beneficial.”

The spots will have a $10 fee per night and allow no more than five vehicles per location. It will allow vehicles to park from 8 p.m. to 8 a.m. and then be returned to regular parking for the other 12 hours. Per provincial public health guidelines, a minimum of one empty spot will be needed between each vehicle.

To avoid any possible COVID-19 transmission, a consistent group of participants will be required.

“We have a great need in our community and I’m hoping this will work to meet that need,” Coun. Joanna McCallum said, applauding staff’s creativity for the pilot program and acknowledging some tweaks may be needed, but it’s a great starting point.

“We’re a community that speaks to finding places for everyone. I believe this program has the ability to reach out to those [who want to] live safely in our community while working.”

According to the Spring Labour Market Review from the Job Resource Centre, the rental market in Banff and Canmore has held firm. A single bedroom apartment is averaging $1,452 in Canmore, while Banff is $1,506. A shared living space averages about $834 per person in Banff and $844 in Canmore.

Some residents opposed certain locations proposed as part of the 2020 pilot, such as the Elk Run baseball diamonds. They argued the plan needed more consultation with locals and expressed public safety concerns.

Multiple attempts by the Outlook to reach the Cougar Creek Concerned Citizens group were unsuccessful.

The group had previously asked council to not run the safe park pilot program at the Elk Run baseball diamond and requested it be located at Wapiti Campground, which is leased to a private operator.

While lots were not officially selected, an analysis by staff listed four locations as fitting the criteria. South and north of the Canmore Recreation Centre, Elevation Place and the nearby gravel lot were all identified. The four locations have a combined total of 420 spaces, according to the staff report.

A security company will continue to monitor the lots during the night and provide a daily report. To be eligible, a person will have to be employed in the Bow Valley for an average of 20 hours per week and have a valid driver’s licence, insurance and registration.

The program will be managed by the Community Social Development department’s housing evaluator, who also works with Family and Community Support Services and the Family Resource Network.

The operational details will be finalized this month, according to the report, and the program registration is expected to begin in May. A report will come back to council in November or December on the outcome and potential next steps.

Discussion for the pilot program began in 2018 after there was a noticeable increase in the people living out of their vehicles. According to the report, it caused “both real and perceived concerns for the safety of individuals living in their vehicles and for the larger Canmore community.”

A municipal working group was created to look at possible actions to be done and a report, Cost-Benefit Analysis of Municipal Options, was reviewed by council in 2019. A limited enforcement approach was first undertaken with restrictions brought in for overnight parking at some locations.

A seasonal outreach worker was hired to connect with people living in their vehicles and gave council additional feedback for options moving forward.

Lisa Brown, the Town’s manager of community social development, said they don’t anticipate more than 20 applicants this year. If there is more demand, she said they’ll present people different options for housing.

She said research in 2019 found 38 people living in their vehicles, which represented about five per cent of the seasonal workforce. Their average time living in a vehicle was 75 days.

She noted Canmore has the highest living wage and housing prices in Alberta, with a person needing to make about $30 an hour to live in Canmore, but many seasonal workers starting at roughly $19.

Where the money’s going