Stranded paddlers had lucky escape on Bow River near Canmore

“It was a fairly close call in terms of swimming in water above the log jam … it was definitely a near miss,” said Kananaskis Country Public Safety specialist Mike Koppang, noting the rescued pair of kayakers were thankfully wearing personal floatation devices.
Jun 23, 2020 1:06 PM By: Cathy Ellis 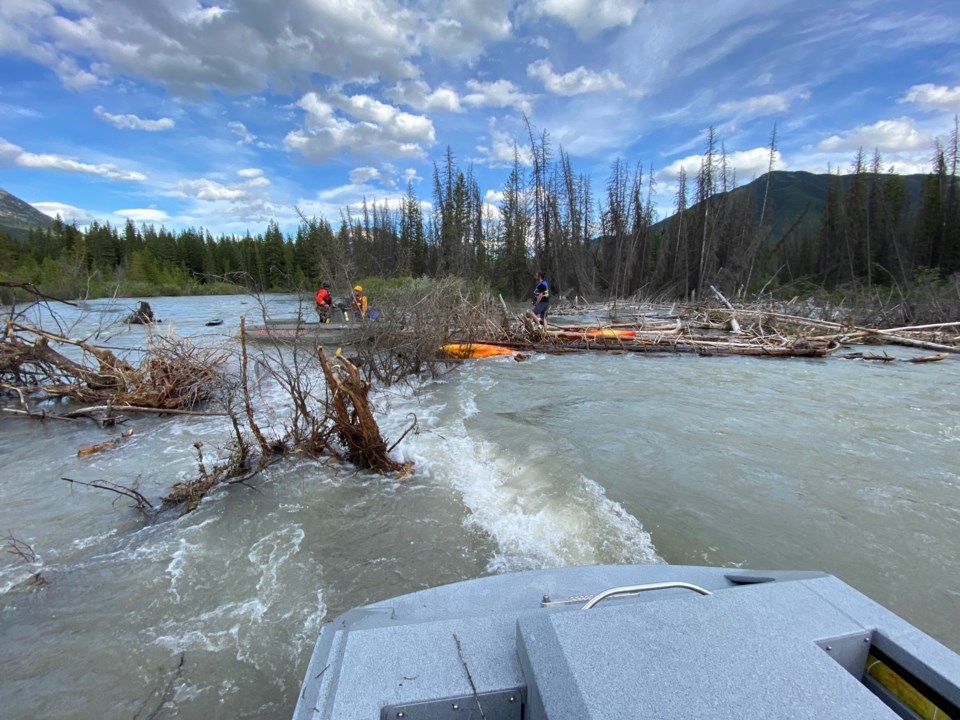 CANMORE – Two kayakers had a lucky escape after getting swept into a log jam and flipping their boats on the Bow River downstream of Canmore on Monday evening (June 22).

Kananaskis Country Public Safety (KCPS) and Canmore Fire-Rescue responded to the call with jet boats, after the kayakers came around a blind corner and were swept into a log jam at the top part of the Three Sisters channel.

After one person capsized, rescuers say both paddlers abandoned their boats and were stuck on the log jam until they were plucked to safety by a jet boat.

“It was a fairly close call in terms of swimming in water above the log jam … it was definitely a near miss,” said Mike Koppang, a public safety specialist with KCPS, noting the pair were thankfully wearing personal floatation devices (PFD).

“They were probably just out for what they thought was an evening paddle, but you need to be aware that the river here is a complex river at this time of year and things can go wrong quickly.”

At this time of year, the Bow River, and many others in the region, are running fast and high – and are quite muddy with runoff. Paddlers must be constantly aware of the potential for danger at every bend of the river.

In addition, public safety specialists remind paddlers that all rivers, streams and lakes in the mountains are cold year-round, and spending any time in the water can quickly lead to hypothermia or drowning.

“I think what they see out their front door they think it’s maybe like that all the time, but as soon as you go around the corner, you can’t see what’s on the other side of that,” said Koppang.

“The river is a dynamic piece of terrain and so you have to be thinking about river safety,” he added, noting it ins important to scout the river beforehand if unsure of conditions.

Canmore Fire-Rescue, which has a fully equipped swift water rescue team and works closely with KCPS, was the first to have its jet boat on the water.

“As soon as we got the call, we started mobilizing our jet boat and radioed Kananaskis Country Public Safety,” said Fire Chief Walter Gahler.

“It was determined we can get on the water quicker so we got our boat in the water and responded with one Kananaskis public safety officer and two firefighters.”

Shortly after, a second jet boat was made available from KCPS, which responded with one public safety specialist and two more firefighters.

“The paddlers required no medical care, they were grateful for the service and understood the predicament they were in,” said Gahler.

“We view this very much as a close near miss. It was a very successful outcome, but it could have have been not nearly as positive.”

In Banff National Park, there was a rescue on the Bow River by the Banff Springs Golf course on Monday afternoon. Parks Canada was unable to provide any details prior to RMOToday publishing this story online.