While current precipitation in the valley has resulted in low levels of water flowing in mountain creeks, officials with the Town of Canmore are currently considering four tender bids to construct a $48.8 million debris retention structure for Cougar Creek, which flooded in June 2013
0
May 22, 2020 3:26 PM By: Tanya Foubert 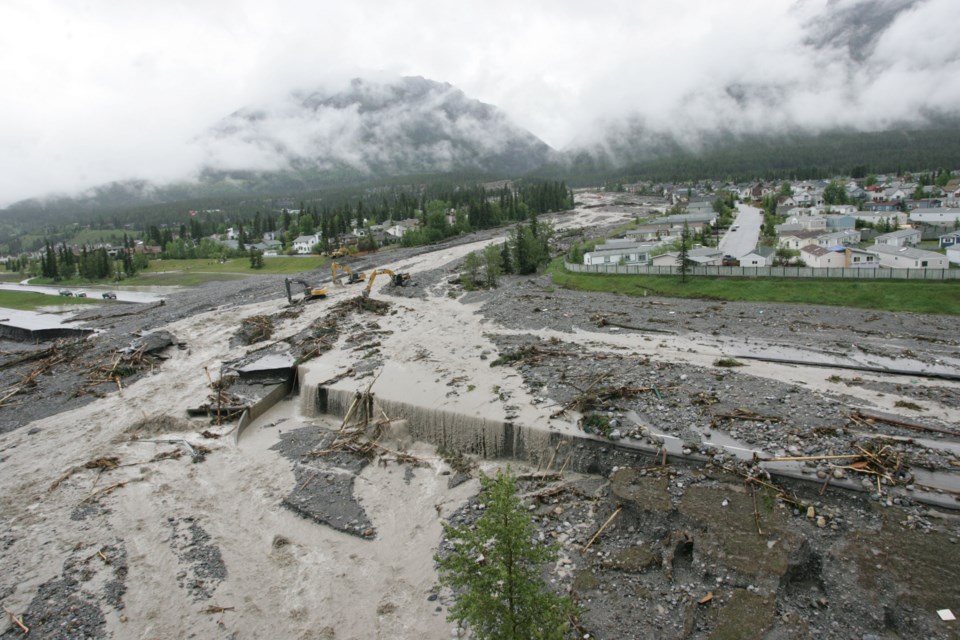 Heavy equipment operators work feaverishly to keep up with debris, as Cougar Creek pours over the Trans-Canada Highway in June, 2013. RMO FILE PHOTO

CANMORE – While forecast rain in the Bow Valley has resulted in water flowing down Cougar Creek again, officials with the Town of Canmore are in the process of considering tenders for construction of a $48.8 million debris retention structure.

The debris dam would allow water to flow through it and hold back rock, trees or sediment during potential future mountain creek debris flood events. Canmore council approved the project after the devastating 2013 flood saw Cougar Creek swell with runoff from a significant rain event mid-June.

The deadline for tender submissions for the project's general contractor closed May 7 and project engineer Félix Camiré confirmed the municipality received four bids.

"The project team is working on the bids," wrote Camiré in an email, adding more detail will be available once the tender has been awarded.

Meanwhile, forecast rain in the valley has seen low levels of water begin to flow in mountain creeks. The Town of Canmore's seasonal high water monitoring system has increased its updates to twice a week to keep the community informed on the risk.

"Current snowpack depth is above seasonal throughout the Bow River watershed," stated the website. "Periods of intense precipitation with total accumulation of up to 35mm are expected today below tree line. Snow is expected in the alpine. Some creeks might be flowing. Groundwater is at average levels."

The tender process comes after the provincial government announced in February its final approval for the project. The structure is designed to reach a height of 43 metres, has a 20 metre wide spillway and could hold back 760,000 cubic metres of water and debris.

“People in Canmore understand the devastation caused by severe flooding, including damage done by mountain debris," said Minister of Environment and Parks Jason Nixon earlier this year. "The Cougar Creek dam will help mitigate the public safety risks posed by debris floods by providing a reliable level of protection for homes, businesses and critical infrastructure in Canmore.”

Once construction begins, however, there will be a closure in place through Alberta Parks for the surrounding area, which is inside the Bow Valley Wildland Provincial Park.

“To ensure visitor safety around the Town of Canmore’s Cougar Creek Debris Dam flood mitigation project, we will close access to Cougar Creek Canyon for all recreational uses," said director of communications John Muir in an email.

In July 2016, the Town of Canmore submitted its application to Alberta Environment and Parks and the Natural Resources Conservation Board for the proposed steep creek flood mitigation on Cougar Creek.

The application included a 1,200-page environmental impact assessment report, and was originally approved in 2018. However, design changes resulted in the Town of Canmore amending its application, which required further review. The approval by the NRCB on those changes came in October, 2019.

Funding for the project has been in place for several years already. In fact, the funds have earned the Town of Canmore hundreds of thousands of dollars in revenue from interest earned while the regulatory approval process was underway.

The split sees Alberta Environment and Parks provide $29 million, Alberta Transportation $1.37 million, the Government of Canada $14.5 million through the New Building Canada fund and $4 million from the Town of Canmore.