At the regular council meeting Tuesday (Oct. 1) Town of Canmore council members unanimously voted on the motion to declare a state of climate emergency, as well as the motion for Mayor John Borrowman to write a letter to Alberta’s premier on the topic.
Oct 2, 2019 3:45 PM By: Alana MacLeod 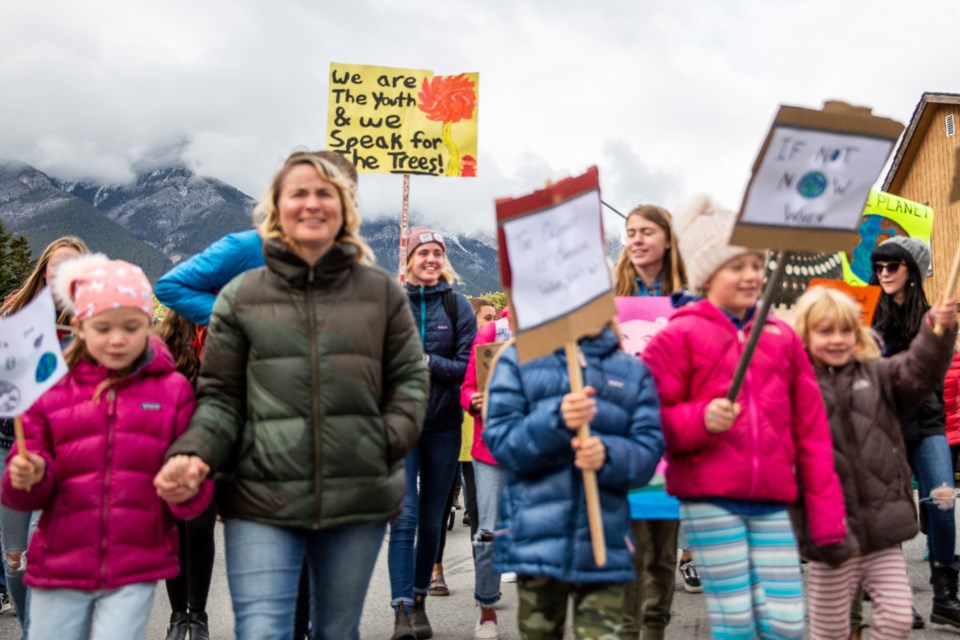 Local residents participated in a global climate strike by marching down the middle of Main Street in Canmore on Friday, (Sept. 27). Evan Buhler RMO PHOTO

CANMORE – The Town of Canmore has officially declared a state of climate emergency.

At the regular council meeting Tuesday (Oct. 1), Town of Canmore council members unanimously voted on the motion to declare a state of climate emergency, as well as the motion for Mayor John Borrowman to write a letter to Premier Jason Kenney on the issue.

“This declaration will serve to acknowledge the Town of Canmore recognizes the serious global impact resulting from climate change and that we support action intended to reverse the impacts of human contributions to global warming,” said Borrowman.

“This declaration will reaffirm council's clear statement of priority in our 2019-22 strategic plan, which identifies the goal of minimizing our impact on climate change by reducing our carbon footprint and our waste generation.”

Borrowman also put forward the motion that he write a letter to Premier Jason Kenney “urging him to support whatever initiatives he and his government can, in order to address human-induced climate change.”

“I want to point out, to plan for and manage a healthy community is a challenging task. It requires finding a complex balance, which allows for a strong economy, a healthy environment for humans and wildlife, and a good quality of life for our residents,” said Borrowman.

“The challenge lies in providing that balance for our community and meeting the expectations of our residents, while respecting the financial implications of delivering the infrastructure and services that create a complete community. When the community faces an increasing possibility of environmental threats through such things as wildfires, dwindling water supply, and the changing climate, as decision makers we are obliged to recalculate our priorities and seek a balance between competing needs and expectations of our resources.”

The motion declaring the situation an emergency itself, would make climate change a top priority for the municipality moving forward. Last month, the Town unanimously approved an update to the Climate Action Plan, committing to reduce Canmore’s greenhouse gas emissions by 30 per cent by 2030, with even higher targets for 2050. Borrowman indicated the declaration is not in opposition with the pipeline, but rather an indication that when we can, we should be managing our effects on climate.

Councillor Jeff Hilstad asked if climate action as a top priority would move down affordable housing from the top of the list.

Borrowman said the process and procedure that council will go through to approve strategic plans will be the same, adding that since affordable housing was first made a top priority, the Town has made some strides in that area and it remains a priority.

The declaration comes at a time of heightened concern surrounding climate change, with motivated youth frequently striking for their futures in a movement created by Greta Thunberg called Friday For Future. Here in Canmore, a climate strike took place last Friday (Sept. 27), which saw Main Street flooded with 100-200 locals standing up for climate action.

With a federal election currently underway, Coun. Rob Seeley indicates the hope other governments will take note of what the Town is doing. He said Canmore has been a leader in terms of climate action using examples such as the recent launch of the organics diversion program and the installation of solar panels on Town buildings.

“Canmore can be an advocate and a climate leader," he said. "Our declaration also works to support and encourage other levels of governments for real climate aciton for Alberta and Canada."