“The principal aim of the Red Tape Panel is to eliminate the duplication or complexity of regulation processes to make it easier for people and organizations to invest in our province and get Albertans back to work."
0
Aug 13, 2019 1:35 PM By: Paul Clarke 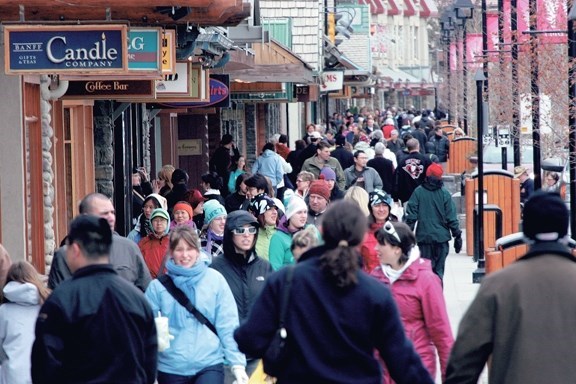 Darren Reeder, executive director for the Banff and Lake Louise Hospitality Association, and Yannis Karlos, co-chair for the Association for Mountain Parks Protection and Enjoyment, were both named to a provincial panel to cut red tape in the hospitality and tourism sector. RMO FILE PHOTO

BOW VALLEY – Two Bow Valley residents will help the province cut red tape in the tourism and hospitality sector as part of the government of Alberta's promise to eliminate redundant and inefficient regulations.

Darren Reeder, executive director for the Banff and Lake Louise Hospitality Association, and Yannis Karlos, co-chair for the Association for Mountain Parks Protection and Enjoyment, were both named to the 10-person panel.

“The principal aim of the Red Tape Panel is to eliminate the duplication, or complexity, of regulation processes to make it easier for people and organizations to invest in our province and get Albertans back to work,” wrote Reeder in an email.

He said the panel will meet twice a year to look at what can be done to help the government double tourism spending in Alberta to $20 billion by 2030.

“This government has articulated a fairly bold strategy to grow the size of the industry from $10 to $20 billion and I think one of the starting points has to be what is it that stands in the way of us being able to get there.”

He said a lot of people often think of red tape as regulatory impediments that restrict businesses from being successful, however, the review will also look at administrative processes and previous policy decisions by former governments that aren’t working.

He said one policy issue he would like to review is the previous government’s decision to raise the minimum wage to $15 an hour without taking into account deductions provided by employers.

“There are permissible deductions under the minimum wage policy for things such as uniforms, meals and lodging,” said Reeder. “In the mountain parks area, a lot of employers provide subsidized housing and meals at greatly reduced rates as part of the compensation package, so when the government was looking at changes to the minimum wage policy they were looking at hard and fast dollars per hour, but they weren’t considering the value of what some employers were contributing.”

“It was a nonsensical decision that just added a further layer of costs to employers in this region and it doesn’t scale with what other provinces do,” said Reeder.

He said he’d like to revisit the policy and index the deduction limit to the minimum wage to ensure Alberta’s tourism and hospitality industry remains competitive.

While most of the regulations the Banff Lake Louise Hospitality Association deals with are federal in nature, he said the province still plays an important role in the local tourism and hospitality sector.

“Our interests span all spectrums of policy,” said Reeder. “While we operate in a National Park environment we have a lot more federal interests than others in the tourism industry in Alberta, but our ship is still anchored very much to what happens in Alberta.”

He pointed to provincial funding for culture, tourism and economic development as important provincial investments that support tourism in the region.

The panel for tourism and hospitality is one of two panels announced to cut red tape by the provincial government on Aug. 2. The other panel will be composed of oil and gas leaders.

Yannis Karlos, co-chair for the Association for Mountain Parks Protection and Enjoyment, was unavailable for an interview.