Unsung hero in the sky

CANMORE – Lance Cooper was a man of few words, but the depth and breadth of the impact he had on people’s lives in the Canadian Rockies was immeasurable.
May 30, 2019 12:00 AM By: Tanya Foubert 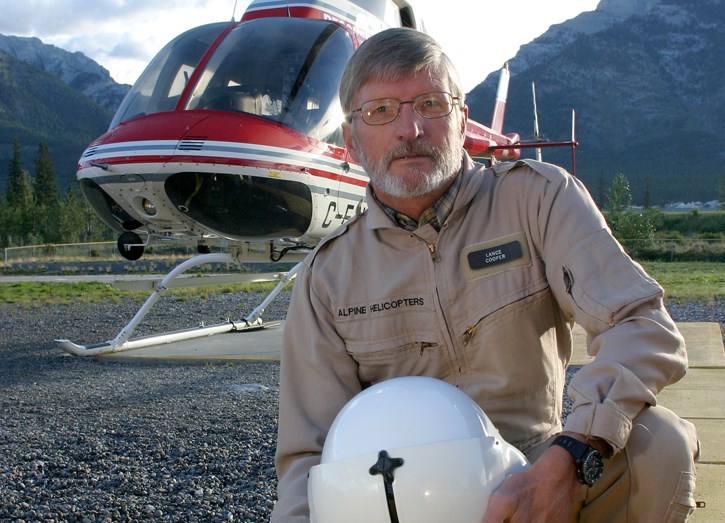 Lance Cooper poses in front of an Alpine helicopter in 2004.

CANMORE – Lance Cooper was a man of few words, but the depth and breadth of the impact he had on people’s lives in the Canadian Rockies was immeasurable.

Throughout his life, he had many roles including husband, father, brother, mentor, warden or business owner, and he meant the world to his family and friends.

But he was also a lifeline to countless people who found themselves in trouble in the Rocky Mountains and in need of rescue, most of whom would never have known it was Cooper in the pilot’s seat of the helicopter that plucked them from precarious places and circumstances.

Cooper passed away in December, but family and friends gathered to in April at the Canmore Legion, a popular haunt for Cooper, to celebrate his life.

“It is quite unbelievable the amount of fathers, mothers, daughters and sons he helped bring home,” said Kananaskis Public Safety’s Mike Koppang. “It is a huge accomplishment the number of people he helped save in the mountains in the time I was able to work with him.”

Mountain rescuers from throughout the region, including Parks Canada, paid their respects at the memorial with an honour guard.

Retired Warden Brad White said although Cooper didn’t talk very much, he garnered the respect of everyone he worked with and he was lucky to have known and worked with him.

“I remember one where it was a really tricky rescue,” White said. “With 200 feet of line on [the helicopter], he went down into this canyon where there was literally inches on each side to get down.

“He never touched the side of the canyon, that is the kind of flyer he was – he never said much but he would get it done.”

Retired Parks Canada Warden Rick Kunelius paid tribute to his former colleague and friend as a man who impressed many with his ability to do things well – particularly when it came to being a rescue pilot.

“I think that is what impressed us all about Lance, he didn’t take on anything that he couldn’t do well,” Kunelius said.

Born in 1949 in Thunder Bay to parents Cecil and Stella, the Coopers relocated to the wilderness of the Columbia Valley when he was still a young child along with older brother Johnny and younger brother Rocky.

Returning home, Cooper married Linda Brewster and soon began working for Parks Canada as a warden in the backcountry at various locations including Banff.

By 1972-74 he was studying resource conservation at Lethbridge College and ended up back in Kootenay National Park after he finished, where he worked with Byron Irons.

Cooper ended up in Banff National park in 1975 and that was the same year he got his first airplane. Flying and building his own airplanes became a bit of a hobby for Cooper, at a time when you could still fly into the Banff air strip.

“By this time, most of the guides and wardens knew each other,” Kunelius said. “We were not that big of a group … we had a lot of fun.”

But by 1975, he said there was more of a focus on training, even though the equipment available was not very modern.

“There was a lot of improvisation,” Kunelius said. “We learned a lot in those days and Lance was important in helping us work our way through the solutions.”

Those improvisations included tying a tope underneath the helicopter to rescue someone from location that is difficult to access – an idea that come from the International Commission on Rescue Work, but didn’t have standardized gear available.

“Over time, things became more sophisticated,” Kunelius said. “We were all having a grand ol’ time being the rescuers of ourselves.”

As a rescuer in the Rocky Mountains, Cooper worked closely with helicopter pilots and eventually one day he made the decision to change careers. He went to Edmonton to study and the family moved from Healy Creek to the Bow Valley. By 1981, Cooper was flying helicopters as Canmore Helicopters and had a base along the highway in Canmore.

In 1985, the Town of Canmore provided him with a location where the municipal heliport still sits along Bow Valley Trail today. The same year, he flew his first rescue and by 1986 he had taken over the contract to fly in and out of Assinboine Lodge. Cooper also helped Brian and Allison Brewster build Shadow Lake Lodge by flying in the logs for the structure.

In 1989, Cooper received a certificate of achievement form Search and Rescue Canada.

After about a decade in business, Canmore Helicopters was purchased and became Alpine Helicopters and Cooper continued working as a pilot. He was recognized for 5,000 hours of incident free flying and by 2000 it was clear the industry needed standardization. Cooper became the chief check pilot for all up-and-coming rescue pilots and conducted the examination to qualify pilots to be able to sling a human underneath a helicopter.

The sale of the company created more time for Cooper to enjoy fishing, spending time with his son Todd on the Spray Reservoir and tropical fishing in Belize. Todd achieved his helicopter pilot’s licence in 1998 and began flying in Jasper, eventually ending up at Alpine as well.

“Of course, Lance would always take every opportunity to go catch a fish,” Kunelius said, especially if it meant a stopover at Assiniboine.

Sepp Renner, who operated the lodge, recalled 27 years of Cooper delivering supplies or guests to the backcountry location.

“He had incredible peculiarities,” Renner said with a laugh. “We always prepared a really good lunch for him … but I never noticed what he did until one day … he opened the window and out went the tomatoes and out went the salad … that was Lance.”

His ability to manoeuvre the helicopter in some of the tightest spots and at high elevations was legendary and in 2009 he received an emergency service achievement award and in 2014 he retired – leaving even more time for fishing and spending time in the Florida Keys with his family.

In 2018, Canada Post recognized first responders across the country with a stamp and the unveiling was held in Banff. Cooper was there for the event and the background of the stamp included the distinct red-coloured Alpine 407.

There are many words that could be used to describe Cooper’s stoic character, but none more so than those his daughter Tanya shared with family and friends – dearly missed.

“I will always cherish the twinkle in my Dad’s eye when he happened to find people he truly appreciated and as we all know, Dad didn’t sugar coat his emotions,” Tanya wrote in a tribute shared at the memorial. “So, you definitely knew when you were loved.

“I was gratefully able to say goodbye to my Dad and in those moments I knew we meant more to him than anything in the world. I became a different soul when we lost the man that defined my life.

“Not only did he guide and teach me, he let my try fail, retry and then find my own direction.

“You made me proud to be your daughter, to stand up for what I believe in to earn and value respect to follow my passions.”