CANMORE – People living in their vehicles in Canmore who will soon be subject to new early morning parking restrictions are questioning why elected officials put the rules in place to begin with, instead of finding a better solution to the lack of av
0
May 30, 2019 12:00 AM By: Jenna Dulewich 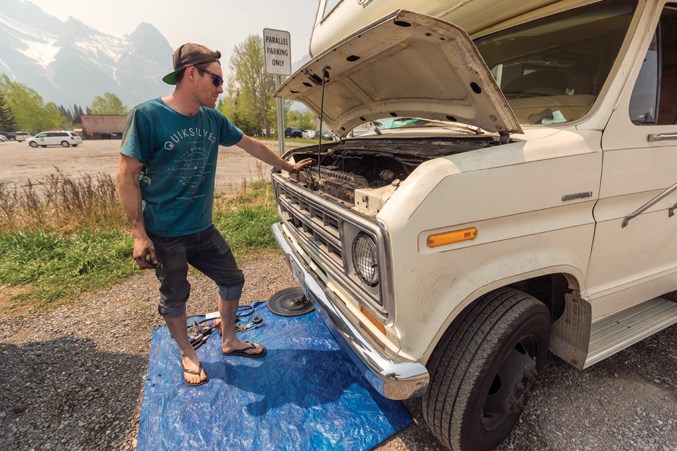 Sam Boyle, 26, works on his roaming home in Vanmore in Canmore on Tuesday (May 28).

CANMORE – People living in their vehicles in Canmore who will soon be subject to new early morning parking restrictions are questioning why elected officials put the rules in place to begin with, instead of finding a better solution to the lack of available and affordable housing in the community.

At the beginning of May, Canmore council voted to put in place a new parking restriction for the lot behind the Save-On-Foods beginning this week that would require vehicles to move between 7-9 a.m. each morning.

The move was intended to address the increasing numbers of vehicles and people camping overnight in the area.

Markey rolled into “Vanmore,” as it has come to be known, 10 months ago and has since found full-time employment working night shifts. He said the two-hour displacement in the morning manageable, but he still questions why the no-parking restriction was needed to begin with.

For Sam Dunbrack, 29, in Canmore for seasonal work, living the vanlife was a solution to the lack of housing in the community.

“Here we are trying to solve the problem then we are being shutdown,” said Dunbrack.

Travelling with her partner, Sam Boyle, 26, both originally from Australia, the pair explained they spent last summer renovating their camper van into a home on wheels, knowing it would be hard to find affordable housing in Canmore with their rescue-dog, Trigger.

“I get it you don’t want ‘tent city,’ but people are self-contained already,” Dunbrack said.

She said they looked into setting up in the local RV parks instead, but the rent was still too expensive for them.

“It seems like a rushed fix,” said Tom Harper, 27 who is also originally from London, U.K., but has been in Canmore for a week in his camper van.

Coming from Montreal, he explained his camper van broke down during his travels and that is how he ended up in Vanmore a week ago when he was towed to the infamous patch of gravel. Waiting to get the parts fixed, Harper said he learned about the parking restrictions and said it doesn’t “make sense.”

“They should just find a permanent solution,” Harper said.

The Town acknowledged it is dealing with a complex issue, as there are four different demographics living in the municipal parking lot – those pursuing a life in their van, short-term campers, seasonal workers and those who are in need of supportive housing.

“I think there is a general understanding that some people may be sleeping in their vehicles because they don’t have other options so the [administrative] option we chose gives us a better opportunity to understand what is motivating people there,” said Mayor John Borrowman.

Earlier this month, council was presented with three different options from administration on how to move forward managing the number of people sleeping in their vehicles overnight in the municipal parking lot.

Option one was to maintain last year’s implementation with no additional legal enforcement, or legal restrictions. Option two was to introduce limited enforcement with prohibited parking between 7 a.m. and 9 a.m. daily. Option three was to initiate full legal enforcement that would no longer allow overnight parking on the municipal land between Elevation Place and Save-On-Foods.

The first option was narrowly defeated in a 4-3 vote with Councillor Vi Sandford, Karen Marra and Jeff Hilstead in support. Mayor Borrowman and Councillors Joanna McCallum, Esmé Comfort and Rob Seeley were opposed.

Council went forward with option two with administration noting the additional legal enforcement gives the option for FCSS, Bylaw and RCMP to provide outreach and that parking restrictions “may deter growth.”

Council was in full support except Sandford, who said during the meeting that the option did not “change the flavour.”

“If that place will be a ‘shanty town’ after 10 a.m. everyday, where people have to watch people do their private things in public. You’re putting the public into an uncomfortable interface, but for two hours a day it will be sterilized … I cannot support this,” she said during the meeting.

In addition to the parking restrictions, council approved $25,000 to hire a seasonal outreach worker for May to September, to better understand the underlying demographics and identify long-term solutions.

Since the council meeting, Town Manager of Protective Services Greg Burt said he has been visiting Vanmore for the last couple of weeks with Canmore Family and Community Support Services to make sure no one is “caught off guard.” The visits included informing campers of the changes expected to come into force this week.

“We are getting to know people and getting to know their stories, and from an enforcement standpoint, I am just sharing that signage is going up … we want to make people aware of that and honestly my goal would be to hand out zero tickets,” Burt said.

Individuals living in Vanmore confirmed that at least one non-registered vehicle was towed since the council meeting on May 7.

“I don’t know how they can do that to a human being,” said Andrew Brown, 40. “You know it’s one thing if it was an empty vehicle that someone left behind, but there was a bed in there, that is where they slept – this was someone’s home.”

While it was not Brown’s vehicle that was towed, he said he is passionate on the issue, as Vanmore started out as a homeless refugee where individuals could come if they could not find/afford housing, before “social media, blogs and media” started promoting the parking strip as an inexpensive way to “camp.”

“Unfortunately people have made this out to be a free campground where it’s actually a safety net for people without a home,” Brown said.

A quick Google search shows websites promoting how to live the “Vanlife” in Canmore, with blogs such as solofemalevanlife.com listing two “popular” parking locations – Save On Foods and Information Centre.

“I lived in the Save on Food car park for three months and I never had any issues ... the great thing about parking here is that you can literally walk out your door to do your grocery shop,” the blog post reads.

According to the most recent Bow Valley Labour Market Review put together by the Job Resource Centre, the average rental rate for a one-bedroom in Canmore is $1,422, a two-bedroom averages at $1,767 and a studio/bachelor is approximately $946 – based on listing in the local print and online media between last August and this January.

RV parking with services is not much more affordable, with three RV parks located in Canmore. Spring Creek RV rates range from $264 to $384 weekly, Rundle Mountain RV Park rates range from $264 to $336 weekly and weekly trailer rents ranging from $1,250 to $1,650 weekly, and Wapiti ranging from un-serviced walk in only tent sites at $27 a night and powered RV sites at $37 a night with monthly stays also available upon request and dependent on availability.

“The problem isn’t going away today and I live here, you try build a life here and it feels like you're being pushed out ... it can make life really difficult really fast.”

The general Vanmore consensus is they want to see a permanent solution.

One of the individuals living in Vanmore said asking people to move was not the solution because “if you ask people to leave they are just going to scatter.”

“I think they should do an affordable campsite,” Markey said.

Canmore’s mayor admitted during the council meeting that none of the options presented were ideal and maybe option three could be a “temporary solution” until potentially an “option four” was presented.

“I referenced option four ­– I have no idea what it would be,” Borrowman said.

More recently, the mayor mused that option four “could be” renewing the Wapiti campground lease and “reimagining the options of the campground.”

Wapiti Tents Campground used to be a Town-run inexpensive option for seasonal workers from the 1990s to 2009 as a way to stop people from illegally camping in the woods. In 2009, council deemed the model no longer sustainable and the land has since been leased to a private company to run the campground.

The potential problem with revisiting the original Wapiti Tents Campground idea is the future of the land, situated between Bow Valley Trail and the Trans-Canada Highway at the west end of the community, remains uncertain as the land is leased from the province.

Borrowman said the Alberta government has indicated it does not intend to renew the lease and is considering possible future uses of the site in conjunction with the visitor information centre.

“This is not an ideal solution but maybe there is an opportunity in the future to revisit that if the province is willing to work with us ... so many unknowns makes it difficult to imagine where this thing can go,” Borrowman said.

“At this point we told administration to follow the option we approved and asked admin to come back later in the summer with their report.

“There is no easy answer on this one."