CANMORE – Fish and Wildlife are currently monitoring a medium-sized black bear spending time in a Canmore neighbourhood and officials say it is the same bear tranquilized, tagged and relocated last summer.
May 2, 2019 12:00 AM By: Jenna Dulewich 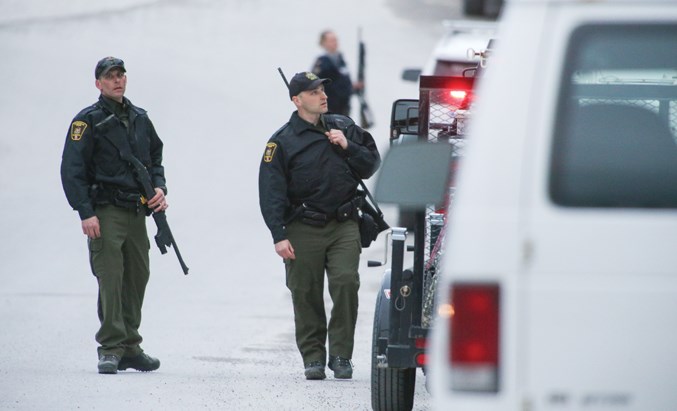 Alberta Fish and Wildlife and RCMP officers search for a black bear in the Peaks of Grassi community in Canmore on Friday (April 26). The bear was tranquilized and relocated on Thursday (May 2).

CANMORE – Fish and Wildlife are currently monitoring a medium-sized black bear spending time in a Canmore neighbourhood and officials say it is the same bear tranquilized, tagged and relocated last summer.

Over the past week, wildlife officials tracked the bear throughout the Peaks of Grassi neighbourhood and went door-to-door to ask residents to secure any food attractants they may have in their yards.

“Worst case scenario is the bear becomes extremely habituated to human food sources and that bear would have to be euthanized because of either aggressive behaviour, or safety risks,” said Fish and Wildlife Officer Matthew Visentin.

“I’m sure that is the last option anyone wants to have, but ultimately if residents are not doing their due diligence that is a very realistic result.”

Last year’s black bear was originally attracted to the area due to natural food sources such as buffalo berries and fruit trees, but grew more brazen and accustomed to human food sources during the several days spent in the Peaks neighbourhood, eventually entering a garage.

The bear was relocated to an area approximately 40 kilometres away and was deemed a “success” last August.

Over the weekend, however, three black bears were spotted in Peaks of Grassi, Stewart Creek and the Canmore Nordic Centre areas.

Of the three bears spotted, two were medium-sized and tagged, one with an orange tag and one with a red tag – both presumed males, and the third had a “vague description,” but was reported as small and appeared to be only passing through by the Nordic Centre, not causing “any problems.”

The black bear seen in the Lawrence Grassi Ridge area accessed garbage and recycling attractants, which means the bear was “rewarded with non-natural food sources.”

“It’s not aggressive, but it is acting indifferently – it doesn’t have a lot of fear of humans, so that is definitely concerning,” Visentin said.

“We haven’t taken any action … likely if we get an opportunity we would immobilize it, tranquilize it and move it from the residential areas, so it’ll reduce the risk of conflict in town.”

He said it is a good reminder for Canmore residents to be bear aware and bear smart.

“The bear is accessing garbage bags and household goods, so it is very important that residents in the area are not putting any unnatural [attractants out],” Visentin said, referring specifically to the Peaks of Grassi neighbourhood.

“Those are the kind of issues we are seeing with this bear because he is being rewarded with food from garbage bags and that kind of thing, so he is getting an easy meal which we don’t want.”

The Town of Canmore has a bylaw about removing wildlife attractants including bird feeders, fruit trees and shepherdia (buffaloberry) with fines ranging from $250 to $10,000.

At press time, it was unknown if any residents were charged with having wildlife attractants accessible.