The Town of Canmore is formalizing two official off-leash zones at Quarry Lake, while residents in Banff are asking for a dividing fence at the industrial compound off-leash dog park to separate smaller dogs from larger ones.
Jul 27, 2020 10:20 AM By: Cathy Ellis 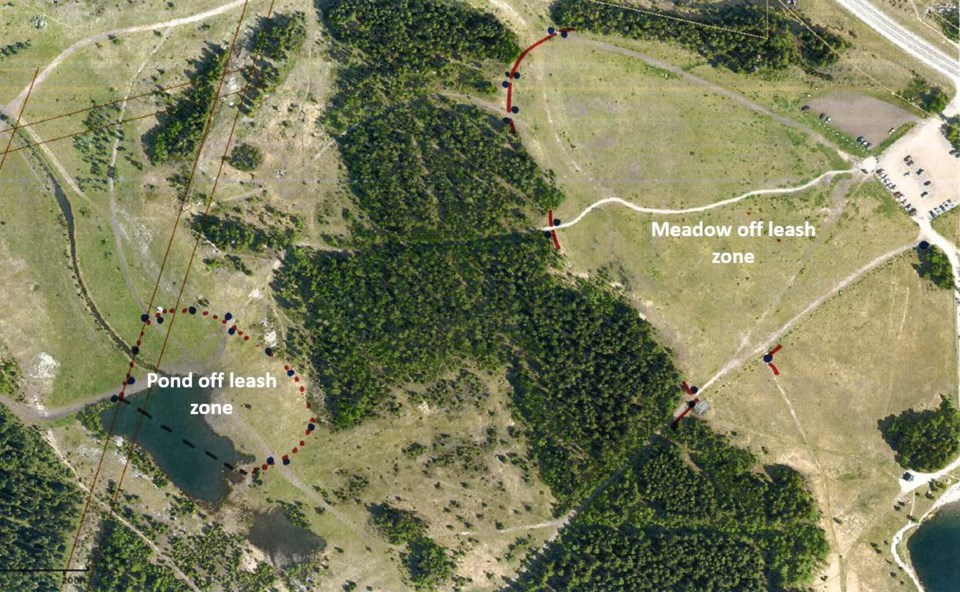 A map depicts the meadow and pond areas at the Quarry Lakes Dog Park. SUBMITTED PHOTO.

Officials say the meadow and pond areas will be the two official off-leash zones, with all other areas, including the one-kilometre loop trail, requiring all dogs to be on leash.

“You will be required to have your dog on leash outside of the meadow and pond areas once the new signage is in place,” according to the Town of Canmore's Facebook post on Friday (July 25).

The off-leash areas will be marked as follows:

The change still allows for continued use of the pond, giving dogs a place to swim.

The one-km loop trail and pond also lies within what is known as the Quarry Lake habitat patch.

According to the municipality’s website, reducing the off-leash zone within the habitat patch acknowledges the importance of use of the area by wildlife.

“This is a compromise solution – allowing for some continued use, while recognizing the area is important for wildlife,” it states.

Meanwhile, Banff resident Mariana Barron is making a pitch to Banff town council on Monday (July 27) to create a division inside the existing dog park at the industrial compound for smaller dogs that are typically less than 22 pounds and standing shorter than 16 inches, as a general rule.

A letter from resident Elise Findlay backs up Barron’s request.

Findlay said she has tried many times to to take her Westie kuma to the dog park, but has given up because she does not feel her dog is safe there.

“She has been run over regularly by the larger dogs and snapped at on a few occasions, thankfully without serious injury,” she wrote in a letter to council.

“I know dogs play and it can get rough, but there is a big difference between a little dog like mine being bit or run over by a small dog and one that is easily four times her size.”

Findlay said she would love to be able to use the dog park so her pet can socialize with other dogs in a safe manner.

“I think public spaces should be open to all users and a small dog section, or even a time that was reserved for small dogs, would mean that I would feel safe using the dog park,” she said.