“For a Fire Chief in quarantine, it is a challenge to feel disconnected," said Canmore Fire-Rescue's Walter Gahler "But the important thing to recognize is it’s not about me or any one person, it is about the community as a whole, the vulnerable population, the older, the medically compromised – it’s about protecting those folks."
0
Mar 16, 2020 5:55 PM By: Jenna Dulewich 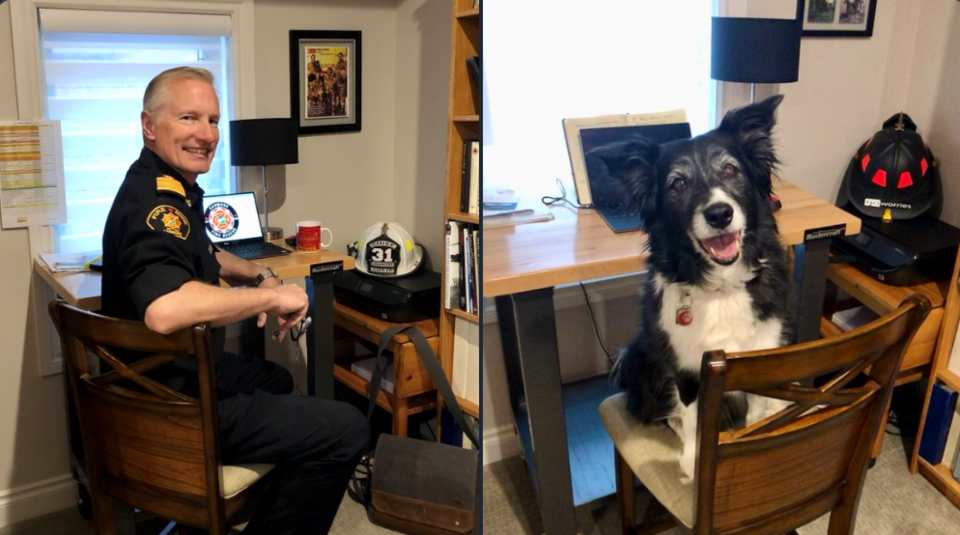 CANMORE – While the rest of the country faces closures, event cancellation and travel restrictions during the COVID-19 outbreak, Canmore Fire Chief Walter Gahler has already been self-isolating since last Thursday (March 12).

Taking a proactive approach after some international travel, Gahler took some time out of his busy isolation to chat with the Outlook about precautions the local fire hall is taking, working from home and his new love-hate relationship with cooking.

“We took a very progressive approach,” Gahler said Monday (March 16) over the phone.

Gahler said there are currently five Canmore Fire-Rescue staff, including himself, in self-isolation after recently returning from travel outside Canada. Gahler and two others were in the United States to work on engineering the specifications for the department's newest fire truck, an $850,000 captial project approved by council in the 2020 budget.

“For a Fire Chief in quarantine, it is a challenge to feel disconnected," Galer said.

"But the important thing to recognize is it’s not about me or any one person, it is about the community as a whole, the vulnerable population, the older, the medically compromised – it’s about protecting those folks.

“And if we want to flatten the curve, or change the trajectory of the virus transmission, we have to act decisively.”

We are in this together. Self isolation due to travel. No symptoms but key is to break transmission paths. The great team @CanmoreFireRes have operations under control; we are here for you. My sidekick and I have lots of work to do; see you in a few days! #leadbyexample #Hygiene pic.twitter.com/80OJ4LR3Rd

COVID-19 first hit Alberta on March 5 with a presumptive case in the Calgary zone of a woman in her 50s that later turned out to be a positive case. By the next day, another presumptive case was announced of a man in his 40s living in his Edmonton zone.

By the end of the week, Alberta had four presumptive COVID-19 cases, all related to travel. As of Sunday (March 15), the number of cases in the province had increased dramatically with 56 confirmed cases.

The province recommended self-isolation for those who had recently returned from international travel, or for anyone showing symptoms, while also restricting events of 250 or more people, prompting the cancellation of shows, concerts and sporting events.

“These decisions are not made lightly, and I know they will have a tremendous impact on Albertans; day-to-day lives, particularly parents, children, and seniors. But it is crucial we do everything possible to contain and limit the spread of COVID-19,” Alberta Chief Medical Officer of Health Dr. Deena Hinshaw said in a Sunday (March 15) press release.

Fully dressed in his Fire Chief uniform, Gahler took to Twitter Sunday from his home to announce his self-isolation, stating that while he was showing no symptoms, “the key is to break transmission paths.”

“The key message to Canmore is we are still well-staffed and it is still business as usual with certain precautions taken internally to provide the same level of service to the community … If it’s good enough for the prime minister then it is good enough for me,” Gahler said.

Out of an abundance of caution, I too will be self-isolating & self-monitoring until we get Sophie‘s results back. But I‘ll be busy working from home. Today, I‘ll be speaking with some world leaders and joining ministers for a Cabinet committee discussion on COVID-19.

So what is self-isolation like for an emergency services department chief?

Still very busy, according to Gahler.

“There is so much work to do,” the Fire Chief said with a laugh. “The situation is evolving so quickly, I am busier at home than I would be at my desk.”

Gahler said he is maintaining regular working hours while being virtually connected, checking in hourly and making online videos to give updates to his staff.

One of the perks of staying at home has been the furry friend company from his daughter’s dogs, featured on social media: Sophia the border collie, and yet to be featured Reggie, the red and white border collie, Chocolate the chocolate lab and the cat cousin Leonard.

During his downtime, he has even taken up cooking.

“I have tried to cultivate some skill in cooking, which I have had limited success,” he said with a laugh.

So far his best recipe has been a breakfast sandwich, where the local Fire Chief said he would share one of the secrets he discovered – good Italian prosciutto.

But all yolks aside – Gahler said some of the important aspects of self-isolation is to keep busy, get some sunshine, try take up a new hobby, and call your friends and family when you are feeling down.

“If you can get outside and look at the sun, get in your backyard or balcony while maintaining strong social distance … if you are not working, this could be a great time to start on that project you always wanted to [and] make sure you talk to someone – when you are feeling anxious or limited or bound, talk to a friend, talk to a family member or reach out to any mental health resources that are available to the community at large,” he said.

Gahler and the rest of the self-isolated Canmore Fire-Rescue members are expected to return to work at the fire hall next week.

Prime minister's wife, Sophie Gregoire Trudeau, tests positive for COVID-19: PMO
Mar 12, 2020 8:40 PM
Comments
We welcome your feedback and encourage you to share your thoughts. We ask that you be respectful of others and their points of view, refrain from personal attacks and stay on topic. To learn about our commenting policies and how we moderate, please read our Community Guidelines.