CRPS pleads with community after COVID-19 case in Canmore school 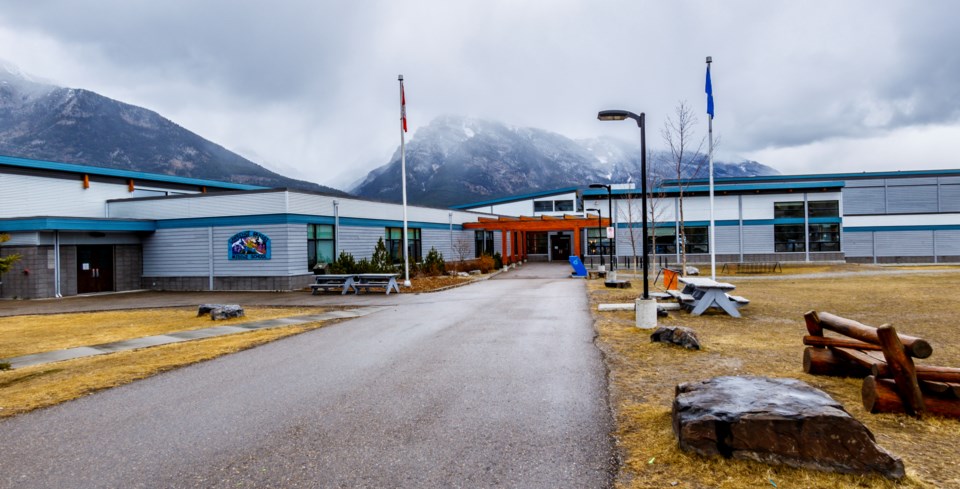 BOW VALLEY – Schools have opened and a local school division is doing everything in its power to keep it that way, which includes a forthright plea with the community.

Less than a week after students returned from summer break, one confirmed COVID-19 case at Canmore’s Lawrence Grassi Middle School (LGMS) prompted the removal of two in-school classrooms for the interim as students, parents and the school division anxiously waits for test results to return.

“The school division will do their best with regards to keeping our students as safe as possible,” said Canadian Rockies Public Schools (CRPS) superintendent Chris MacPhee.

“But as the chief medical officer [Deena Hinshaw] said, we will get cases in the schools, and it’s happened already in our school division, but we will only be as safe as our community is at keeping this virus at bay ... We need help from everybody for keeping our community safe, which in turn keeps our students safe and our schools open.”

As students and staff return to school, new rules and guidelines are in place to battle the spread of the coronavirus. It’s a new reality, where school officials contend with daily changes from health authorities and the threat of classroom instability, such as what happened this week with two classrooms being removed from in-school learning in favour of in-home learning on a short-term basis.

CRPS learned of the confirmed case from Alberta Health Services (AHS) at around 9:15 a.m. Monday (Sept. 7) and acted swiftly. A notice was sent to parents of the Grade 4-8 school later that day.

"Our schools remain open to in-person learning for students, and we are working closely with AHS to ensure necessary measures continue to be in place to protect all staff and students,” the notice read.

“We have also taken the precautionary step of moving one other class, who has a sibling of the individual who tested positive, to online learning for a limited time.

"This is a temporary measure until we have confirmation from AHS officials that it is safe for their children to return to school."

As of Tuesday (Sept. 8), 11 schools across the province have confirmed cases. All have been the result of community transmission and not from an infection at school, according to Dr. Hinshaw, Alberta’s chief medical officer of health.

"I know it can be frustrating after a few days in school to stay home," Hinshaw said Tuesday. "It's understandable to be frustrated, but at the same time we need to approach the situation cautiously. Anyone exposed can become sick in the next two weeks."

CRPS board of trustees chair Carol Picard was surprised the positive case came as quickly as it did, but knew it was only a matter of time due to the "nature of the beast." She emphasized that this is the time for families to look at their own practices when dealing with the pandemic.

“We are only as good as our weakest link,” said Picard. “And if we want to keep these schools open, every single family out there needs to examine what they’re doing and make sure they’re playing by the rules and that their kids are playing by the rules, so that we can continue to do this safely.”

Despite a positive COVID-19 case at LGMS, CRPS says its re-entry has been “extremely smooth” but far from perfect.

“We’re dealing with something we’ve never dealt with before, so we are asking for a little compassion when it comes to dealing with these pieces because we aren’t going to always get it right,” MacPhee said.

"We all have a responsibility to keep ourselves informed of public health measures to prevent the spread of COVID-19. We have received several emails from parents and community members that are clearly not aware of public health directives. The more people stay informed and follow AHS directives, the better our chances that school will remain open."

Of the $640,850 in federal funding the province allotted to CRPS for its re-entry, a dollar figure “spent before they received it,” a chunk went to staffing and extra janitorial staff in the schools.

"When we're looking at shortfalls in cash of approximately $2.5 million, $640,000 is not going to make up that dollar amount," MacPhee said.

About $150,000 of the re-entry funds went towards personal protective equipment (PPE) such as no-touch sanitization stations, 2,550 individual hand sanitizers, floor distancing signs, crowd control belts, face shields, masks, gloves, and wipes, among other things. The PPE was spread across CRPS schools in Banff, Canmore and Exshaw.

“That’s been on the go to get our schools ready since June and a great deal of time at the end of August to make sure we’re ready,” said Steve Greene, director of technology, learning and facilities.

For the time being, five to six classes have been combined as CRPS works through challenges and reassigning staff to at-home learning online. Close to seven per cent of staff are teaching online.

It's unclear what the international student program and Outdoor Learning program will look like in 2020-21, which is a financial blow to the school division. Last year, the programs brought in approximately $1 million to CRPS.

MacPhee also said the division is down about 48 students overall from last year. The district has approximately 2,100 students registered for school this year.

Inside schools, students and staff are adjusting to the new normal after the first week. At the kindergarten to Grade 8 level at CRPS schools, administration has set up cohorts, or groupings of students and staff, to avoid mixing classes. For recess and lunches, a staggered system is in place.

“There’s enough of that collaboration that we’ve had in past, we’ve had to just keep one cohort together with one assigned teacher and perhaps one educational assistant in that classroom,” said Debbie McKibbin, director of learning and innovation.

“Outside of the classroom ... at recess time, we’ve had staggered recesses and lunches so there’s a smaller group outside and those classes remain in their cohort in a designated zone, and those zones are rotated day-to-day through recesses.”

At the high school level, CRPS is utilizing the quarter system – broken up into four equal parts – and students take two courses per quarter. This model allows the Grade 9-12 students the ability to choose a mix of learning possibilities from in-class and distance learning programs, among others.

A big change students will have to get used to is at lunchtime when campuses will close due to the nature of the tourist towns. CRPS said this will prevent students from potentially being exposed to international travelers.

Schools will be closed after the five-hour school day is finished, including to teachers, so janitorial staff can thoroughly clean the premises.

Often taking place after school are sports practices, which were authorized to return this fall by Alberta Schools’ Athletic Association with restrictions, such as giving school divisions the final say to green-light them or not. CRPS will revisit the subject in the coming weeks.

“We felt it was most important to get school up and running and just really focus on a safe startup,” said McKibbin. “And sports we also recognize is very important for the health and wellness of our students and we have promised families that we would revisit that by Oct. 1.”

During these challenging times, however, McKibbin adds that she's received positive feedback from students eager to return to school.