BOW VALLEY – Fear among LGTBQ students have grown, after Bill 8 amending the School Act was introduced by the newly elected UCP government last week.
Jun 13, 2019 12:25 AM By: Alana MacLeod 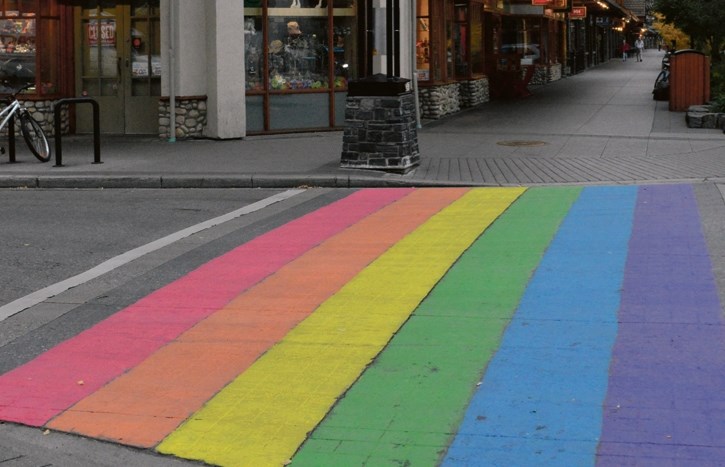 A street crossing painted in honour of Banff Pride at Wild Bill’s Saloon.

But a Canadian Rockies Public School (CRPS) board trustee said she hopes a policy put in place within the district won’t be affected.

CRPS trustee and school board chair Carol Picard said though she’s concerned about the amendments in terms of gay-straight alliances (GSAs) in schools, she doesn’t see any resistance among her own board that would remove LGBTQ related student groups from the safe and caring schools protection.

“We passed our policy on GSAs in 2008, we were the second school division in Alberta to pass policy stipulating, specifically saying, that under safe and caring schools, the LGBTQ cohort is included,” she said.

“I haven’t spoken to the rest of the board, but I don’t see any resistance among our five that they would want to change that in any shape or form.”

Introduced last Wednesday (June 5) by Education Minister Adriana LaGrange, Bill 8 leaves out previously passed NDP legislation that offers privacy protections for students in GSAs, which some say is creating a sense of fear for students involved in the clubs. Picard said she could sense this fear while attending a mental health themed event in Red Deer last week.

“There was an awful lot of fear on the part of our LGBTQ kids that this is a giant step backwards if they’re going to remove the legislation that basically allows teachers to maintain a child’s secret until they’re ready to come out to their parents or their friends,” said Picard.

When LaGrange made her announcement, she was heavily questioned about the process to create a GSA group in a school, which the opposition has said creates watered down rules and delays for those looking to start one.

Sarah Hoffman, the NDP’s education critic, spoke after LaGrange’s announcement and said it feels like an attempt to abolish LGBTQ student groups.

“What we’ve seen is an act to destroy GSAs,” said Hoffman.

“What has been brought forward here today is reverting back to legislation that kids told us, they told the media, they’ve been telling everyone, that it wasn’t good enough.”

Alongside these changes, the amended Education Act promises changes to Charter School. Those changes include lifting the cap on the number of Charter Schools allowed.

Additionally, if passed, the new act would give board trustees the option to disqualify a fellow board member as well it would make changes to the age that students remain in schools, which Picard said in an email “greatly concerns some of our rural school divisions that run K-12 schools, as Canmore used to do, in having 21-year-olds in school with five year olds.”

If passed, Bill 8 would replace the 31-year-old legislation, Alberta’s 1988 School Act. In 2015, a new Education Act, officially passed in 2012, was amended, but neither was proclaimed into law.

One feeling among Alberta education board members is that the current Education Minister is simply moving too fast.

LaGrange said, if passed, the new Education Act would be in effect for Sept. 1, 2019.