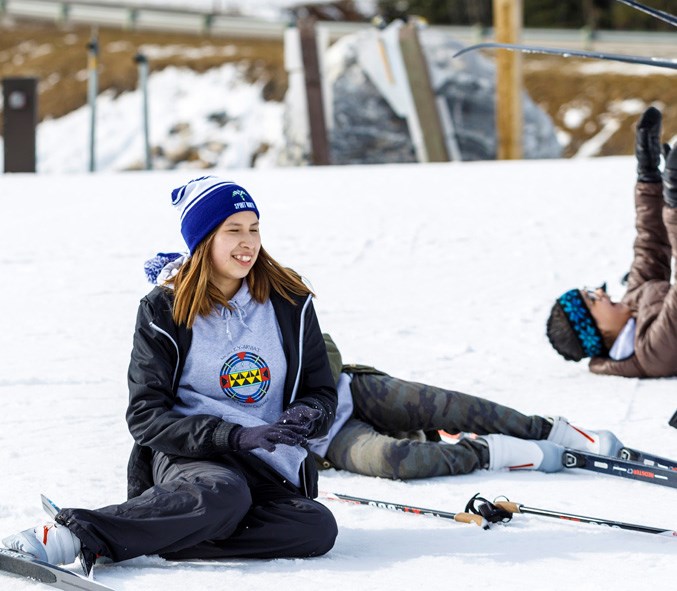 The Stoney Nakoda and exchange students briefly learned a few basic drills, including how to stand back up on skis after falling, before hitting the trails near the Bill Warren Training Centre on Monday, March 25.

Landing in southern Alberta on March 22 after making the trek from Arviat, Nunavut to Stoney Nakoda First Nation with 11 other students, the 15-year-old Inuit youth took a quick break between activities to chat about the experience.

“It has been really fun,” he said with a smile. “Seeing the nice views of the mountains, beings able to going skiing and tubing for the first time and meeting new friends.”

Travelling from the Inuit community known for its large barren land rivers and gentle rolling landscapes with scattered lakes and ponds, the 11 teens arrived in the Bow Valley last month as part of the YMCA Youth Exchange Canada program, where the Inuit students had a lot of first experiences – mountains and trees included.

Organizers with the Morley Community School created a jam-packed week to give the students the best experience possible for their short week in the Valley.

“This is all about creating connections, creating understanding and building capacity for kids to follow their dreams, or do cool things out in the world,” said Adam Lindenburger, student counsellor and health support at Morley Community School (MCS).

Starting with a hike, the Arviat and Morley students climbed Mount Yamnuska one day, went snowtubing at Norquay another, skied with Spirit North, spent a night at the Canadian Rockies Public Schools Outdoor Learning Centre, checked out the hot springs in Banff, watched a mini powwow at the school and had a sweat at a Stoney Nakoda elders home.

“It gives our students a really cool opportunity to share their culture, their understanding and their world view and that’s where I’ve seen a lot of the positivity and joy coming out,” Lindenburger said.

In the past, MCS students have participated in the exchange, most recently in 2016 when Stoney Nakoda Nation accepted 15 Mohawk students from Kahnawake, Que. and in turn 15 students from Morley travelled to the Ta-Otha Community School for a week.

The exchange program stalled for a couple of years after 2016, but was revived this year with the help of dedicated teachers and school staff.

“It’s really important because it really builds bridges between the communities and it helps our students see new opportunities and new experiences and other ways of knowing different world views,” Lindenburger said.

Originally partnered with a school in Yellowknife, Lindenburger said it worked out when the Morley Community School pairing fell through and Avriat’s exchange school also fell through, resulting in the two schools matching.

“I would tell other kids that [Alberta] is really big, there’s lots of nice people and there’s trees here because there are no trees in Arviat. I really liked it,” Baker-Spence said.

“It’s amazing to share cultures and learn their languages ... Everyone has been so nice and friendly and they’ve never seen this before,” the Stoney Nakoda teen said.

Now that the Inuit students were able to explore the valley, Stoney Nakoda and southern Alberta, the Morley Community School students will be heading to the Nunavut community for a week in May for their part of the exchange program.

“I know there ain’t going to be trees, or mountains, but there are other cultures out there and other ways of life – it’s fun to share."