BOW VALLEY – The 2018-19 school year is off to a good start. A few days before school officially got underway, Our Lady of the Snows Catholic Academy and Exshaw School each received $5,000 to help fund two innovative student-led projects.
Sep 6, 2018 12:00 AM By: Paul Clarke 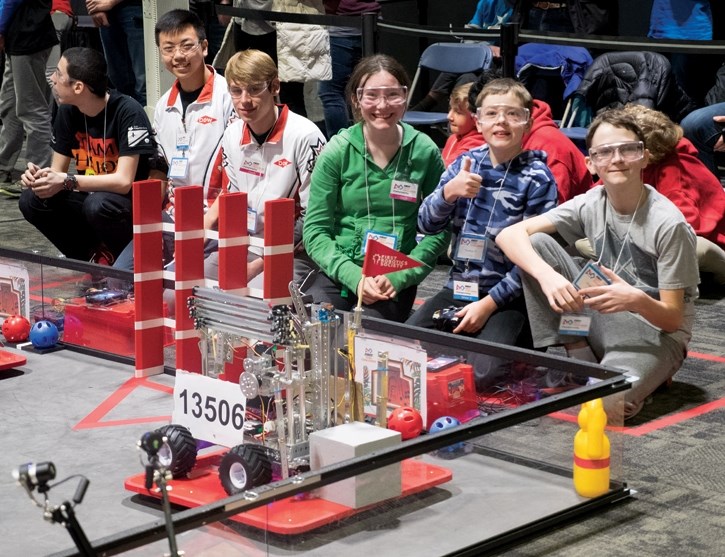 The robotics club at Our Lady of the Snows Catholic Academy will use the $5,000 grant to try and develop a prototype robot to help sort plastic.

A few days before school officially got underway, Our Lady of the Snows Catholic Academy and Exshaw School each received $5,000 to help fund two innovative student-led projects.

In Exshaw, the money will be used to create interpretive trail signs along the South Exshaw Trail that was heavily damaged during the 2013 floods.

As part of the project, each sign will have a QR code and link to a student-created website with further information about the area’s ecosystem and its geography.

The signs and websites will also include information and stories from the Stoney Nakoda First Nation.

“I’ve always wanted to have them delve deeper into the area and really explore things that are of interest to them,” said Michelle Kulmatycky, the Grade 8 teacher at Exshaw School who applied for the grant.

“This is going to be something where they can bring their children back to look at it years down the road and it is going to be a sustainable project that we can use as the school moves forward.”

She said she initially got the idea in 2017 while Canada was celebrating its 150th anniversary and was spurred to apply for the grant after learning about the recent installation of eight interpretive signs highlighting the Indigenous history of the Bow Valley.

As part of the project, students will also learn how to code and build a webpage on a shared website.
“The literacy in technology is really moving ahead and if we don’t jump on the train these kids are going to be left behind and a lot of us are really engaged in the technological aspect of things. I think this is a really great way to tie into their interest,” said Kulmatycky.

At Our Lady of the Snows Catholic Academy, the funding will be used to help a team of students from Grade 7 to 11 build a robot they hope will be able to identify and ultimately separate colour-coded plastic from mixed recyclables.

For the past two years, the synthetic biology club has been using science to develop a unicellular organism it hopes will make an enzyme that can locate and colour code PET #1 plastic, making it easier to sort and divert plastic waste before it ends up in the landfill.

According to Arvisais, once students figure out how to colour code PET #1 plastic the hope is the robot will be able to identify the plastic and sort it from other recyclables.

“The grand scheme of things is to tackle real world problems,” said Arvisais.

Both projects are part of 11 other STEM-focused projects that were selected across the province by the Association of Professional Engineers and Geoscientists of Alberta (APEGA).

It’s the first time the organization has launched its Innovation in Education Awards and doled out a total of $50,000.

“APEGA wants to help expose students to the real-life applications of science, technology, engineering and math, and the positive impacts that the associated fields have on the world,” wrote APEGA registrar and CEO Jay Nagendran.