CANMORE – A local high school student was awarded a prestigious scholarship to the University of Calgary this fall, making him the second student from Canmore to win the award in three years.
May 16, 2019 12:17 AM By: Alana MacLeod 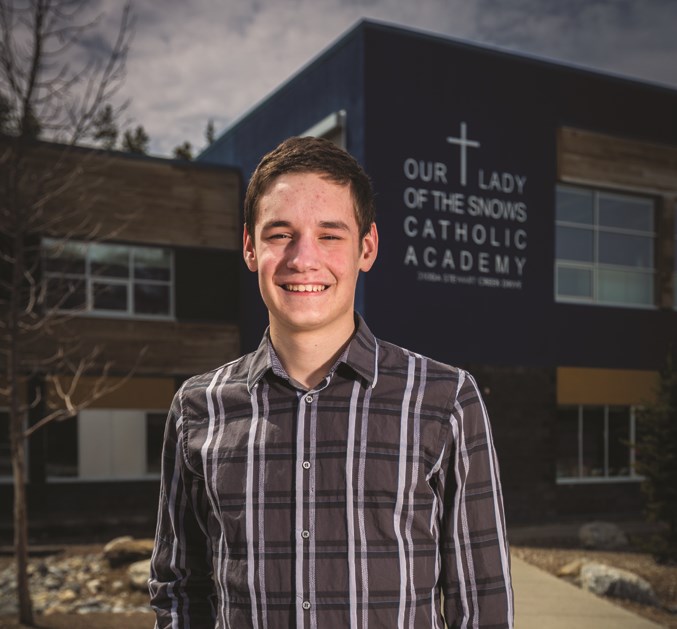 Elian Dupre Sarmiento, recipient of a 2019 Schulich Leader Award to the University of Calgary, at Our Lady of the Snows Catholic Academy in Canmore on Thursday (May 9).

CANMORE – A local high school student was awarded a prestigious scholarship to the University of Calgary this fall, making him the second student from Canmore to win the award in three years.

Elian Dupre Sarmiento from Our Lady of Snow Catholic Academy (OLS) won the $100,000 Schulich Leader Scholarship for this upcoming September, a scholarship known as one of the most coveted across Canada related to STEM studies – Science, Technology, Engineering and Math.

Sarmiento said the scholarship came as a bit of a shock to him, adding that he has good grades but not the “high 90’s you hear about.”

“When I got the call in April, I was surprised but I was really excited. The Schulich scholarship – that’s a pretty big deal and I didn’t expect it,” he said.

OLS vice principal Remo Targa said Sarmiento spent a lot of time working in STEM programs while the school has been actively adding these programs to further student interest.

“In a very short period of time we’ve been able to bring STEM activities as a big part of extracurricular activities for our students,” he said, adding they did not anticipate this amount of success.

“Our STEM programs here at our school have been exceptional and the amount of student interest that they’ve attained is great for a school our size.”

A sentiment echoed by Sarmiento, who said there’s one teacher in particular at OLS who made this possible for him, Luc Arvisais.

“If it weren’t for him, our STEM program in the school wouldn’t be what it is today. I have him specifically to thank for it, for getting me into all those clubs in the school for the sciences,” said Sarmiento.

Among only a few of Sarmiento’s long list of accomplishments so far; he was a nominee for the Rotary Adventures in Technology in Saskatoon, he participated in the International Genetically Engineered Machines competition in Boston, he participated in design thinking workshops in
San Francisco, as well as excelling in high school entrepreneurial boot camp credits at the University of Calgary.

He will actually be the second student in only three years from OLS to win the scholarship, something Targa said is quite amazing.

“For us as a small school, for two of our students to receive that scholarship in a matter of three years is unprecedented,” he said.

“So we’re really, really happy. Elian has a lot of people in the town to thank – he does things outside of our school that’s contributed to this award.”

Alina Arvisais won an $80,000 Schulich Scholarship in 2017, allowing her to study biochemistry at the University of Waterloo.

“It’s more than the money, too. The scholarship comes with a network of STEM leaders across Canada, so they keep you going. They supply you with mentors and help you get to where you want to be in the future – it’s all inclusive,” said Sarmiento.

Sarmiento will be enrolled in engineering at the University of Calgary next fall. He said he’d eventually like to go into mechanical engineering, though software engineering isn’t completely off the table. In the meantime, he’ll be continuing with his flight training in Regina on another scholarship from the Air Cadet League of Canada.